TM Racing Australia's Nick Sutherland will transfer to a 250MX two-stroke for the weekend's third round of the Terex Australian Supercross Championship after fielding a four-stroke at the opening rounds. 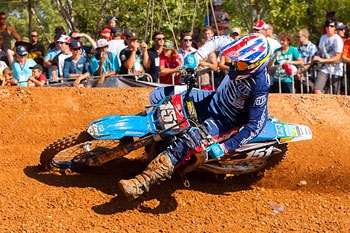 Nick Sutherland will switch to a two-stroke for the remainder of ASX.

TM Racing Australia’s Nick Sutherland will transfer to a MX 250 two-stroke for the weekend’s third round of the Terex Australian Supercross Championship after fielding a four-stroke at last month’s opening rounds.

Sutherland won the Coolum round of the 2-Stroke Cup to cap of the outdoor season in September, but switched to the MX 250 FI for the Darwin rounds of supercross after breaking his collarbone between events.

Saturday in Darwin saw Sutherland race to a remarkable seventh, and then he secured eighth on Sunday.

“I have been riding the two-stroke a lot,” Sutherland said. “During the week when I go practicing I’m always on the two stroke and I have been feeling good on it, so I took it out an tried SX on it.

“I felt good so I thought I’d make a change over to it for the remainder of the series.”

An added benefit on Sutherland’s side for Saturday at Mount Gambier is that his collarbone injury is nearing 100 percent after taking time out between rounds.

“I didn’t ride for two weeks after Darwin, I wanted to give my collarbone a chance to heal itself and so I rested for a couple weeks,” he added.

“I have been riding the last two weeks doing a mix of both motocross and supercross, so all going well I should be ready for Mount Gambier this weekend.

“Since my crash, I’ve been really timid, the crash kind of scared me and I wasn’t overly impressed with my results at round one and two so I need to get myself some starts and get my confidence back up again this weekend.”

Entering South Australia this weekend, Sutherland sits seventh in the standings after two of six rounds.

Partnering Sutherland for TM Racing Australia at Mount Gambier will be Nyk Geck and the returning Ryan Ziepes.