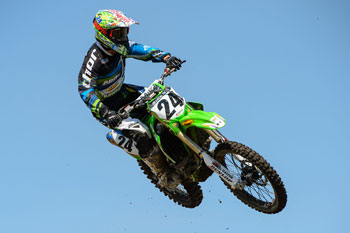 This year’s Canadian MX1 Motocross Champion has struck a deal to campaign a Kawasaki KX450F in an arrangement with SIC and ADR Motorsports in the double-header Phillip Island rounds and Toowoomba’s finale.

It was originally hoped that Metcalfe would make it home in time for this weekend’s third round of the ASX in Mount Gambier in what would have been a fitting return for the Aussie international, however prior commitments in the US ruled out that option.

Now, Metcalfe will complete the final three rounds of the 2013 season in preparation for a planned assault on the entire championship in 2014.

“I’m excited to come home for these supercross rounds,” Metcalfe told MotoOnline.com.au from his home in California this afternoon. “It was only decided on Sunday that I would come back and race, I’ve had so much going on.

“I knew there was an option to come back, but I really put it off until I was done with the Motocross des Nations. A lot of it’s based on what I’m doing next year, but realistically doing these couple of rounds is really to get back in the public’s eye in Australia doing some racing.

“It’s been 18 months since I’ve ridden supercross, I had my first day yesterday and today was rained out, but we will get a couple of days in.

“I’m excited to get to Phillip Island and then Toowoomba after a few weeks at home, so it should be a lot of fun.”

Metcalfe departed full time racing in Australia at the end of 2001, his most recent appearance on home soil coming back in 2005 at the Oceania Motocross Championships.