MX2 title contender speaks about his KTM deal for the 2014 season.

The signature of one of the biggest revelations of the 2013 season, Kale Makeham, has been hot property for next year. As a privateer two-stroke rider, a number of teams – both MX2 and MX1 – courted him for a ride next year, but Kale Makeham has announced he’ll stay with KTM for 2014.

MotoOnline.com.au caught up with the likable Victorian kid to find out what’s in store. 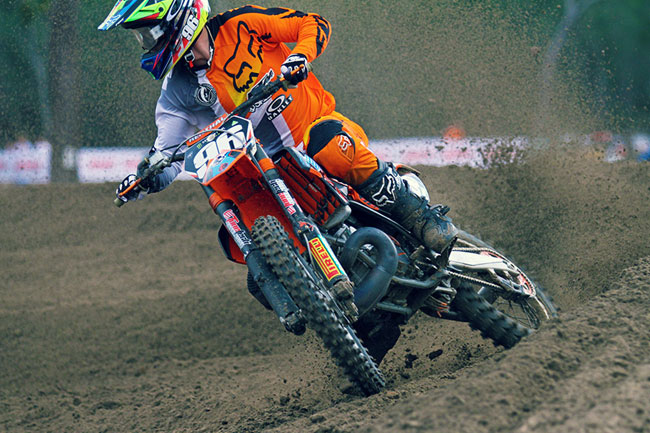 Kale Makeham has been a revelation in 2013. Image: Simon Makker/Makkreative.com.

First up, mate, 2013 has been a killer year for you. How has it been from your eyes?

It’s definitely been a great year. I didn’t know how I was going to go in my first year in MX2. I had a good preseason and preparation and I think that gave me a bit of a head-start early on.

The best thing was how strong I ended the MX Nationals. I was leading races, always up there with Luke Styke and even won a race. It’s been a great progression.

You won the Under 19s Supercross title last year and have stepped up to the pros this year. How has that been?

Well, Darwin definitely didn’t go to plan and I didn’t get it done. I placed fifth and sixth over the two days, but I know what I did wrong and I learnt a lot.

So what did you learn?

I did the best I could, but I expected better from myself. It was a valuable learning curve and I wouldn’t change that for anything.

Your results this year have had a lot of people talking in the pits. Did you get a few offers for a ride next year?

I did, actually. I was cool to see I’ve gained the respect of the industry, but the biggest surprise was the amount of 450 rides I was offered, seeing as I ride a 250 two-stroke. I didn’t rush into anything too quickly, but the offers have made me excited for the future.

Spill the beans, buddy. What are you doing next year?

I’ve signed with KTM again to ride a 250 two-stroke in motocross and supercross. Me and my mechanic Steve Jones will have full acccess to everything KTM does and builds. We’ll be running out own team, still, but with full factory backing from KTM.

I guess so. From what I understand Choice Motorsports KTM isn’t going ahead next year and as far as I know there’s no other official KTM team.

The team will be called Tune Tech Racing KTM Australia Team and now that I’ve got the manufacturer worked out I can start sorting out a few personal sponsors. I’ll go to the companies that I had this year first as I believe in staying loyal to my sponsors.

I’m also looking forward to bringing in a couple of outside sponsors to support myself and Steve.

Why did you decide to stay with KTM?

I just like the guys there. They’ve shown loyalty and commitment to me over the past couple of years and built on that that as my results have improved. I get on really well with Jeff Leisk and I’d like to think we can continue building through 2014 and take on a career in the 450s. 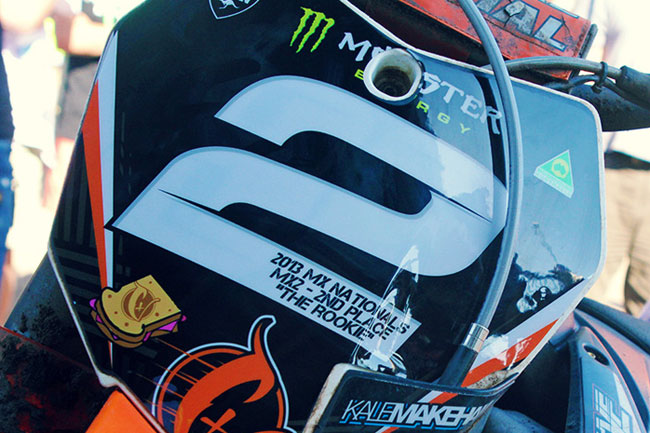 Makeham’s runner-up result in the MX2 MX Nationals was a popular one. Image: Simon Makker/Makkreative.com.

With your ride all locked in for 2014, I guess you can start focusing on next year. What are your goals?

I definitely want to win championships in both motocross and supercross. I improved and learnt heaps this year and I want to go into the MX2 class next year and compete for the championship. It’s that time in my career and I’ve learnt enough in 2013 to say that’s what I’m chasing.

At the same time, national Lites titles are just a goal along the way. I’ve always had an eye on the 450s and I’d love to do a season or two in MX2 in the World Motocross Championship before I hit the 23 years age limit.

I’ve seen what Dean Ferris and Luke Styke have done this year and I’d love to go there in my prime and see what I can do on the big stage. I’m only 20 and what they’ve done has opened my eyes massively to what’s possible.

Awesome stuff. Well, good luck for the rest of the supercross season and we look forward to seeing you tear it up in 2014.

Thanks mate! Speak to you soon.