It’s funny the way media scheduled work when it comes to covering dirt bikes. During the season when you’d think we’d be at our busiest, is actually probably less stressful than when we’re in these quieter months.

Of course Australian Supercross is currently running and landmark events such as the MXoN and Monster Energy Cup are taking place, but for the most part many of the major series have been run and won. For us, instead of stories falling at our laps, we have to work a little harder for them.

Nothing wrong with hard work though and this time of the year is when it really pays off to research and stay in touch with the industry so we can keep everybody up to date with the latest silly season scoops and more.

And also at this time of the year we’re seeing many bikes released, riding gear unveiled and that type of thing. All in all, it’s a different time of the year and still just as entertaining – even more so in some circumstances.

As Christmas and the new year approaches, the bench racing season usually does too; things like who will win A1? Can Moss repeat in the MX Nationals? Has Reed been able to recapture his race-winning form? Will Waters and Styke adapt to MXGPs quickly? It’s all good fun! Here at MotoOnline.com.au we are working on a number of neat refinements behind the scenes to be implemented later this year and next, which will hopefully make your online moto experience that much more enjoyable in its own right when those upgrades are rolled out. Stay tuned for more…

Until next time though, here’s Makker with the first of some silly season talk.

Well hasn’t the past month rocketed by? Four weeks ago we were shaking down the opening two rounds of the Australian Supercross Championship at Darwin, and now we’re waiting with bated breath to see what goes down at the third round in Mt Gambier, SA, this weekend.

With the silly season starting to warm up, all the riders not locked into contracts for 2014 – and let’s face it, that’s the vast majority of every field – are starting to feel the pressure of not only getting results, but proving their worth as the team bosses start perusing the form guides and thoughtfully biting the ends of their pens.

No-one is safe at this time of year. Racers who shone in 2012 but have struggled for form in 2013 might find themselves hearing the all-too-familiar “we’ll get back to you” line over the next few months. 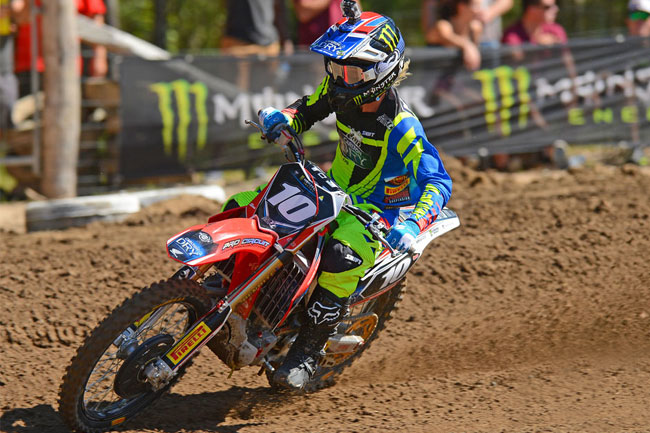 Josh Cachia is one of few who are signed for 2014. Image: Jeff Crow/Sport the Library.

The MX2 team rosters will look like they’ll shrink even further next year. Team Zero Seven Troy Lee Designs Kawasaki has folded, and we’ve heard from several sources that Choice Motorsports KTM won’t be around next year. All this means seats are going to be at an absolute premium in the 250 class… even more so than this year!

So who’s off the market? Josh Cachia (Honda) and Luke Clout (Serco Yamaha) were locked in early, and this week Kale Makeham announced he’s signed a pretty sexy deal that will see him operate as KTM’s official MX2 team for 2014. Make sure you come back tomorrow to check out an in-depth interview I did with Makeham about his plans for next year.

In the Pro Open class we could potentially see some pretty major shuffling take place between now and the end of the year. I can’t see Suzuki and KTM letting go of Matt Moss and Kirk Gibbs respectively, but nothing is locked in by any means.

The pressure really is going to ratchet up on everyone from this weekend onwards. There are only four more national outings for each racer to prove their worth and the opportunities to shine are starting to dwindle.

That’s about all I know this week. Remember to check out all of MotoOnline.com.au’s social networking channels and be sure to Like us on Facebook or Follow us on Twitter and Instagram for even more behind the scenes insights. Just search MotoOnline.