Faith to debut 2014 Honda CRF250R in Mount Gambier ASX round 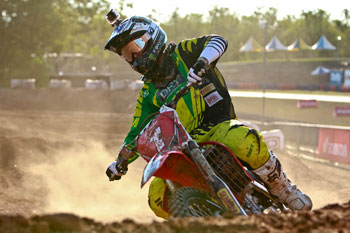 Faith has been aboard a 2014 model in the US recently, that bike purchased by his Melbourne-based team.

With seat time on his side, he’ll transfer from the 2013 to next year’s model for the remainder of the season team owner Yarrive Konsky told MotoOnline.

“Going into the next few rounds should be quite a bit better, hopefully. The schedule is quite different over there – they race a few rounds then take a few weeks off.”

With the large breaks in the schedule, Faith has opted to base his campaign at home in the US this season.

“The schedule is a little spread out this year,” Faith continued. “They had the first two rounds the same weekend and then three weekends off.

“I flew back to Georgia after the first two rounds and then I fly back over there before the next round and then we’ll have three more rounds in two weekends then another three weekends off.

“So after the fifth round I’ll come back to Georgia again and then return for the final round.”

An added bonus of contesting the Australian series is that it prepares him for American Supercross – a vital aspect of his season considering he doesn’t race outdoors at home.

“It’s a big confidence booster going over there and plus racing after not racing all summer is kind of like a warm-up race for me,” he explained. “It’s good to get back in the swing of things riding supercross and actually racing supercross. It’s definitely a good warm-up for the American series.”

Australian Supercross will continue this Saturday in Mt Gambier, South Australia, on 12 October.