What an awesome weekend of racing the Monster Energy FIM Motocross of Nations was. Team Australia excelled, Belgium surprised with their overall, the USA largely struggled as a team and it was nice to see Tony Cairoli land on the podium for the first time with Italy.

As for individual honours, Cairoli proved why he is a seven-time world champion and killed it with the overall via a 1-1 on a track that suited MX2 bikes. In saying that, the 350 was probably a nice intermediate weapon of choice.

Hometown hero Ken Roczen won MX2 overall, but Eli Tomac kept him honest all day long (that second moto was epic) and Aussie Dean Ferris starred with his holeshots and relentless pursuit of the world’s best. Safe to say he’s risen to the challenges of international racing.

Brett Metcalfe was the man with his qualifying win on Saturday, but couldn’t get a start on Sunday to made any real impact. Still, the Canadian champ showed just why he’s still one of the world’s best outdoor riders.

As for Todd Waters, you had to feel for him after having two first turn falls. He ended up fifth overall in Open, but it could have been much more and his pace was clear in that final moto when Barcia was trailing him for a number of laps, only inching closer slowly.

Overall it was an inspiring weekend for Australian motocross. I’ll admit, with Chad Reed reaching the latter stages of his career, Michael Byrne too, plus Brett Metcalfe not able to land a factory deal in the US at the moment, I wasn’t expecting Australia to come anywhere near the podium for at least three to five years. 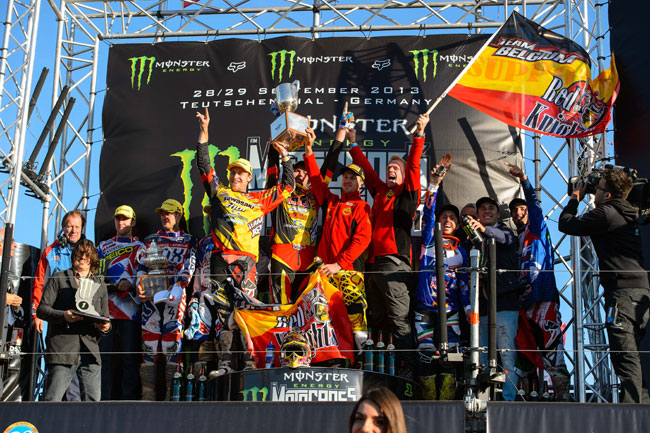 Team Belgium topped MXoN 2013 ahead of the USA and Italy. Image: Simon Cudby.

Last year the youthful combination of Todd Waters, Lawson Bopping and Luke Styke was 10th, which was a long way from Reed, Metty and Matt Moss’ third from the year prior. Now, in 2013 we’re climbed back to fourth and qualified on top for the first time ever. In this case I love being proven wrong!

You have to hand it to Youthstream as well, because in recent times they’ve really advanced the coverage of GPs and I was more than happy to watch it stream live over the net via mx-life.tv. This internet thing is really taking off when it comes to race coverage and broadcasting – a real benefit for us here in Australia.

That’s it from me for today, here’s Makker!

Well, the biggest motocross event of the year, the Motocross of Nations, is done and dusted. Australia’s celebrating a brilliant showing after the team of Dean Ferris, Brett Metcalfe and Todd Waters stormed to fourth overall, while the Americans are crying and finger-pointing about finishing second.

One of the biggest talking points of the whole weekend was the speed of Kyogle’s Dixon Yamaha rider Dean Ferris. On board a 250 four-stroke, ‘Ferriswheel’ set the fastest lap of the entire weekend, holeshot every race, and set social media alight with his speed and aggressive racing style.

I had the opportunity to chat with Ferris via Skype early yesterday morning and you’d be struggling to find a happier bloke after sticking it to the likes of US wonder-kid Eli Tomac and hometown hero Ken Roczen.

With the racing year now wrapped up, Ferris will spend the rest of October getting the 2014 YZ450 ready for his debut season in the MXGP class next year, before coming back home for a well-earned break. As for the Kiwi MXoN team, well they had a bit of a tough one, really. After qualifying in 19th they had a tonne of bad luck, getting caught up in first-turn crashes and mechanical dramas, including a massive rock getting caught in Cody Cooper’s linkage, effectively turning his bike into a hard-tail around the rough track.

That’s the unpredictable nature of racing, I guess, but team manager Josh Coppins was fairly satisfied with how his lads rode and the experience they gained on the big stage.

With the global motocross season now officially wrapped up, focus again returns to supercross, both in Australia (the Australian Supercross Championships) and the USA (the Monster Cup on 19 October).

One of the cool things about this year’s Monster Cup is there’s going to be a new Aussie commentator on the team. A good mate of mine, Rhianna Buchanan (girlfriend of Aussie freestyle trials star Jack Field) was hand-picked by organisers while she MC’d Jack’s trials demo at the Las Vegas supercross in May.

Since then she has received the call-up to join the announcing team. We’re not sure on the direct role she’ll play yet, but I’ve no doubt she’ll kill it!

Until next week, that’s all from me. Remember to check out all of MotoOnline.com.au’s social networking channels and be sure to Like us on Facebook or Follow us on Twitter and Instagram for even more behind the scenes insights. Just search MotoOnline.