What an amazing event. It has to be said, as early as Friday everyone involved in this event had the feeling it would be special and it was more than that.

Brilliant racing, a massive crowd, and in all fairness for the people in attendance total domination from the European riders. So here goes, my top ten things from the 2013 Monster Energy Motocross of Nations. 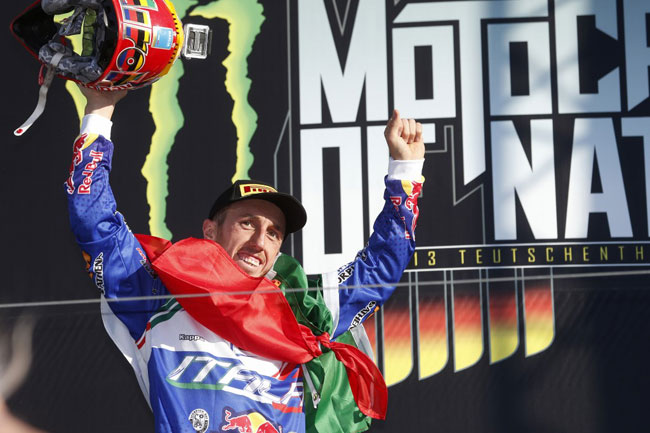 Antonio Cairoli
It is nearly impossible to have a number one, but I have to give it to Antonio Cairoli and his 1-1 performance, to match his 1-1 in Lommel last year. Cairoli just gets better and bette rand while the American media love to call out Ryan Villopoto as the fastest rider in the World, it is a complete lack of respect for the guy who has dominated this event the last two years.

Ken Roczen
Seems strange, but although Team Belgium won this event, the performance of Roczen was my second favorite. King Kenny won his fourth straight MX2 class overall, something that might not have been done before. He might have got a little lucky when Tomac went down in the first moto, although his second moto domination proved on European soil nobody can match him.

Team Belgium
When Jeremy Van Horebeek mentioned on the Friday press conference that Belgium were there to win it, you could tell Team Belgium were up for a fight. Even with the loss of red hot Clement Desalle in that often fateful third moto, Team Belgium still hung in there, fighting until the very end to get the win. All three riders showed they are more than just good GP riders.

Eli Tomac
This kid’s speed in the opening MX2 moto was something special. Until his crash he looked like the fastest rider on the track and was picking off riders one at a time until he got to Roczen in second place. It seemed just a matter of time before he would get the German rider, but then went down hard. In the second MX2 moto he pushed Roczen to his limit and was totally class in defeat.

Dean Ferris
Of course my favorite GP rider at the moment. Being a fellow Aussie and a nice guy to boot, but where did he get that speed from last weekend? The fastest rider all day Saturday, and one of the fastest on Sunday. His starts were perfect and his determination to try and get Australia on the podium impressive. Lets hope he brings this speed and determination to the MX1 class in 2014. Did I also mention he brought huge respect to the MX2 class of 2013? 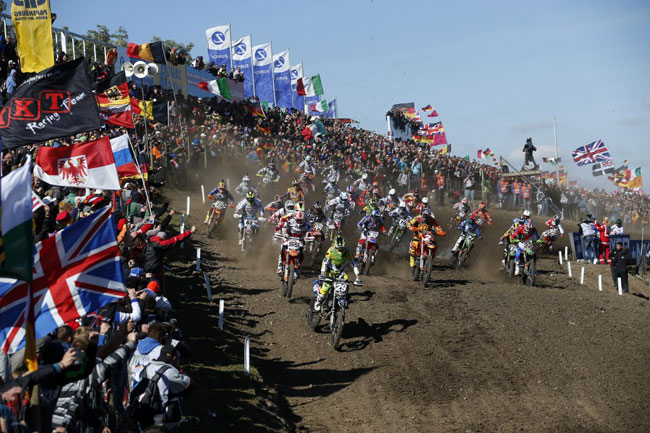 The atmosphere was electric throughout the entire event. Image: Ray Archer.

The crowd
It is said that there were 80,000 over the whole weekend, with around 40,000 on Sunday and with this small facility they were packed in like sardines. Germans love air-horns and more importantly their countrymen. One of the best MXoN crowds of recent years and that says something.

The circuit
The boys at Youthstream did a brillant job with this facility. The dirt was like a supercross dirt, tacky and really nice lines. It did get rough though and respect to Justin Barcia for mentioning that they never get circuits like that in America, so rough and difficult.

The event
One of the best Motocross of Nations I have attended. Racing wise, crowd wise, weather wise (although a little chilly at times), this was a classic. Like Maggiora in 1986, Budds Creek in 2007 or Matterley Basin in 2006, this race will be remembered for it’s great motocross experience.

MX1 GP riders
Making Ryan Dungey look average is not easy, but his 6-7 results showed that maybe, just maybe last year had nothing to do with the sand, but more the amazing talent of the MX1 and MX2 riders. Long live grand prix motocross. Because as of last year they are seemingly the fastest riders in the world.

Team USA
They came, lost and as always left with complete respect for the GP riders. While the looks on their faces showed the amazing disappointment, they only had kind words to say about the GP riders and our circuits.