It is easy to predict that Team USA will win the 2013 Monster Energy FIM Motocross of Nations. They have the strongest team, the biggest budget, the biggest support crew and well, everything is in place for another victory for the yanks.

Of course if you line up Ryan Dungey, Justin Barcia and Eli Tomac against any other team in the world, including an American B-team, then they would win hands down. Mind you Ryan Villopoto, James Stewart and Blake Baggett isn’t a bad team (damn I wish the Americans could send two teams).

But what usually happened in this event it something odd and something will happen. Be it Tomac not coming to terms with the European conditions, or one of the American riders crashing out of a moto, or bad starts causing them problems, or just being beaten by a better, more consistent team, as they have been many times in the past.

What excites me more about this years event is the possibilities and being an Australian I am really looking forward to seeing how guys like Dean Ferris and Todd Waters do.

I mean hey, while Ferris isn’t as fast as Herlings, but what says he is as fast as Roczen and Tomac. Ferris is a brilliant starter, and if he gets a start and they other two don’t, and we know passing is tough at Teutschenthal, then anything is possible right?

Still, I would be surprised if Roczen and Tomac don’t finish first and second in the MX2 class. What positions those two will take is still a big question mark. Can Roczen again show he is the second fastest guy in America, but the fastest MX2 rider at this event, and what many people feel in the world?

My tip is Roczen, Tomac, Ferris, Nicholls and Coldenhoff in the MX2 class. 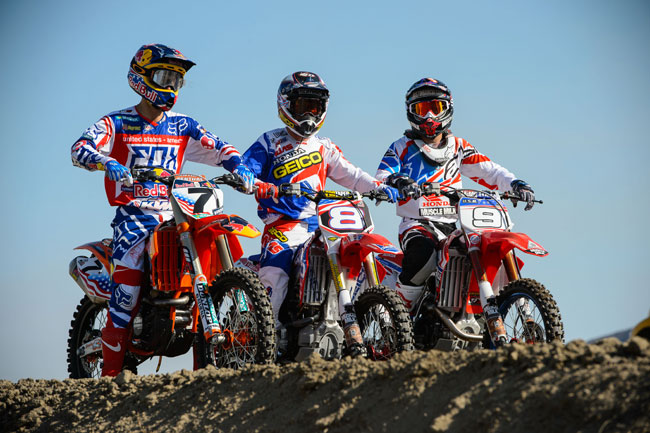 Team USA are the favourites for a 23rd MXoN victory. Image: Simon Cudby.

In the MX1 class its open house for who wins. Antonio Cairoli and Dungey seem pretty similar in talent, they have both won their share of motos at this event, and the question is who has improved the most in 2013? My gut feeling is Cairoli will have Dungey’s number in 2013.

His recent form, and the fact he has been beaten a few times this year, shows that the MX1 class riders, Ken De Dycker and Gautier Paulin mainly, have pushed Cairoli.

Of course in the later part of the season Cairoli was enjoying the celebrations of his seventh world title, which meant some wild parties and a lot of fun. Will this help him or hurt him for the MXoN?

I can’t see Dungey out partying late into the night, he’s a little too straight for that in my opinion. And then we have Tommy Searle, who always performs well at this race and could surprise many.

My tip is Cairoli to get the edge on Dungey, but I wouldn’t be surprised to see De Dycker, Evgeny Bobryshev and Gautier Paulin put in a strong performance, and wouldn’t it be great if somebody other than Cairoli or Dungey took home the MX1 overall? Just to mix it up a little.

The Open class should be all about Justin Barcia and Clement Desalle, but of course then you have Tanel Leok, who always performs well at this race. Plus there’s also young Australian rider Todd Waters.

My tip is for Desalle to win this class from Barcia and Leok, with Waters and Scottish rider Shaun Simpson putting in top five finishes.