MotoOnline.com.au hits up KTM rising star with five questions that begin with the word 'why'.

It’s been an interesting year for 19-year-old Dylan Long. After jumping up from the MXD class to MX2, the kid parted ways with the Choice Motorsports KTM team mid-season and decided to tackle the rest of 2013 flying solo.

And wouldn’t you know it, his results have consistently improved. He finished the MX Nationals in fifth overall, then earned his first Pro Lites podium with a hard-fought third place at round one of the Terex Supercross Championship at Darwin.

With so much going on this year, we thought it was high time we tracked him down and threw five dreaded ‘why’ questions at him. Here’s what he had to say. Why did you decide to jump up to MX2 early?

I thought it was time. In 2011 I had a bad run of injuries in MXD, where I tore all the ligaments in my ankle at the first round, then knocked myself out and tore my elbow up at Moree. I missed almost a year’s worth of riding as a result.

Last year I went okay and it pretty much came down to a battle between me and Kayne Lamont. I didn’t want to get stale and wanted to test myself, so this year I stepped up to the MX2 class. Even though the pace was a massive shock initially, I picked some confidence up during the VIC titles and my pace has improved. 2013 was a learning year for me and I’m already hanging out for next year.

Why did you and Choice Motorsports KTM team part ways earlier this year?

I wasn’t really getting results they wanted and it just wasn’t working out between us. It’s a bit complicated and I don’t really want to talk about it, but I was just having a bad run.

Why did you decide to continue the rest of the year off your own bat instead of pulling back and working on something for next year?

I knew I had the speed to run near the front, but I got taken out in first turns and had to regularly fight through the pack. I needed to keep myself out there and show I wanted this, as it’s too easy to disappear from people’s radars if I’d pulled out of the season.

After Choice and I parted ways we rang around a few places to try and gain some support to continue racing and everyone was shocked I didn’t have a ride. Rock Oil, Fist Handwear and Bret Trigg Visual jumped at the opportunity straight away and kinda kept my racing dream alive.

I already had a good relationship with those guys, and they were all over the moon to help me out. 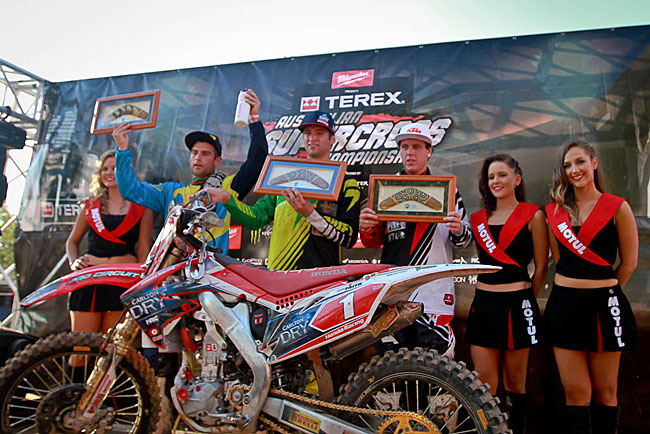 Long stood alongside Gavin Faith and Luke Styke on the ASX round one podium in Darwin. Image: Grant Reynolds/FiftySix Clix.

Why have your results been improving as 2013 progresses?

Me and dad are always testing and we’ve got the bike pretty dialled now. It has a really strong motor, but we’ve worked hard right from the start of the year.

After I left the team I actually felt more pressure to succeed as I knew how much was at stake. I wanted to do well for my mum and dad, who were helping fund me and it’s all worked out well.

As for my results, I guess I’m getting used to riding at the MX2 pace now. At the start of the year I knew I had the pace but didn’t get the chance to show it. My fourth place at Murray Bridge gave me a lot of confidence and now, after Darwin, I know I have what it takes to podium and start pushing for wins.

Why were you a fan of the Darwin supercross?

It was great to be somewhere we’ve never been before and see another part of Australia. Yeah, it was hot and the track fell to bits on Saturday, but I thought it was a sick event. I’m loving doing Supercross again.

It’s hard to say if I like it more than Motocross but everyone says I’m better at it. Getting third on Saturday was a definite highlight though, and I can’t wait for the Mt Gambier round in a couple weeks time.