It’s that time again. Time for the annual Olympics of Motocross otherwise known as the Motocross DES Nations. And by the way I refuse to use the word “of”, I just can’t do it. The best of the best get together in three man teams representing all the countries of the world and take the five best scores (out of six) to see who’s the best. Quite simple really and after years and years of fooling with the format and trying different (and sometimes nutty) formats out, Youthstream has settled on, in my opinion anyways, the best way to score this frantic event.

This years event in Teutschenthal, Germany sees the host Germans running the #1,2 and 3 plates as they won the race for the first time in their history last year in Lommel, Belgian. They couldn’t have played it much better than having the race in their country and being the champs. Of course the only way to top that is by actually winning the race again in front of the hometown fans but they’re not the favorites going into the race. The team’s lost Marcus Schiffer from last year’s squad and Max Nagl hasn’t been as stellar as usual in the GP’s this year. They do have Kenny Roczen, the MX2 rider that’s been the individual class winner three years in a row now. The German’s will be strong on their home turf but the pressure will also be there and they’re not coming in with as much momentum as usual.

Team America left Lommel last year with its tail between its legs after a sound thrashing in the deep sand. The Americans did get third but it was a distant third and truthfully they were a few issues by Frenchman Marvin Musquin away from being bumped off the podium altogether. The Americans lost for the first time in seven years and they’ll be looking to get the crown back. But like Germany, they’re a bit shorthanded from the “perfect” team as Ryan Villopoto, the undisputed fastest rider in the world, chose to have some surgery done and will be missing the race. Team USA still has Ryan Dungey, Justin Barcia and Eli Tomac. Dungey and Barcia were on the team last year and will be riding with something to prove and Tomac just emerged as the 250MX champion after a fierce battle with Roczen. Team USA head to the 2013 Motocross of Nations as favourites. Image: Simon Cudby.

Barcia was the next best pick after Villopoto and having the experience of being on the team in the past (yes it was a losing team but still…) will help him this year. Tomac will be the rookie but there won’t be much competition for him in the MX2 class outside of Roczen as Jeffrey Herlings is moving onto the bigger bike for this race. The worst-case scenario for Tomac is a third if there’s no crashes or bike issues. Dungey is among the very best riders in the world and there are absolutely no worries with him not being ready or being fast enough. The Americans’ performance may very well come down to Barcia and how he does in the MX3 class versus Belgium’s Clement Desalle.

The Belgians will be, as usual, very strong and could win the event. Desalle, Jeremy Van Horebeek in MX2 and Ken De Dycker in MX1 are three world class racers but as with a lot of teams in the event, one wonders if Kevin Strijbos would have been a better choice as De Dycker’s GP performances were a bit off the last month or so. No matter what, they’ll be fast and consistent. And America’s biggest threat in my opinion.

France left Marvin Musquin off its team and although the two-time MX2 World Champion’s last two MXDN performances haven’t been very good, he’s one of the best small bike riders in the world, won two AMA nationals and good job France! As a transplanted Canadian living here in America, thank you for making a move that strengthens Team America’s chances. Gautier Paulin is always fast at this race, Jordi Tixier is a good rider but the choice of Christophe Charlier will come up to hurt them. 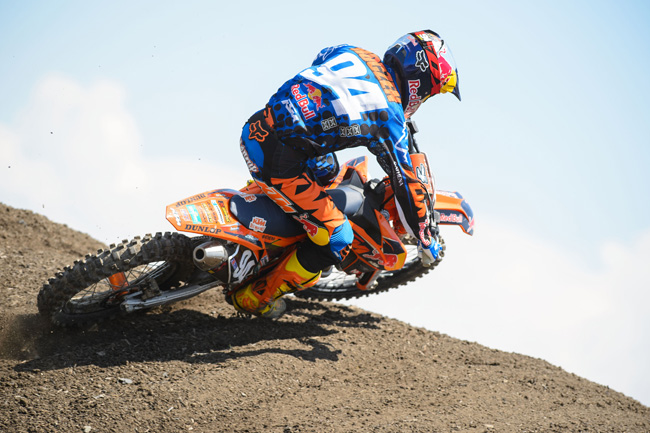 Ken Roczen will be strong on home turf after finishing runner-up in the 250 class of the AMA Pro Motocross Championship. Image: Simon Cudby.

Team Italy has the fantastic Tony Cairoli and the more than adequate Alessandro Lupino but one-time team anchor David Phillipaerts has had a tough year and is on the wrong side of thirty. Once again, the smaller European countries have the toughest time with the third rider. Team Great Britain has Tommy Searle in MX1, Jake Nicholls in MX2 and new first-time MX1 GP winner Shaun Simpson on it. They look like an easy top five team on paper, maybe the podium, but something always seems to bite the Brits at this race.

The Aussie’s don’t have Chad Reed but with the way he had been riding, maybe that’s a good thing (that sound you may hear is him beating me up if he ever reads this). They do have Brett Metcalfe, Todd Waters and GP winner Dean Ferris under the yellow and gold flag. This is a potential sleeper right here folks.

But my ultimate sleeper is Team Russia. That’s right, the hammer and sickle has a chance to do something at the Motocross des Nations for the first time in, well, ever. Evgeny Bobryshsev is finally healthy, Al Tonkov has been on the podium in some GP’s and Evgeny Mikhaylov has done the best he’s ever done in the AMA nationals this past year. This team is perhaps ready to approach the top five this year and maybe even better than that. Don’t sleep on the Russian bears. They’ll be wearing number’s 31, 32 and 33 this year and could be the country that surprise. And if not, well Russian Bobby is sure to be a hit at the after party as usual. Todd Waters will be an asset to Team Australia alongside Brett Metcalfe and Dean Ferris. Image: Simon Makker/Makkreative.com.

So there you have it, a rough rundown of some of the countries and riders that will be in the running for the Motocross des Nations. And yes, I left out my home country of Canada in there. The good news is we’re actually sending a team this year (Cole Thompson, Tyler and Jeremy Medaglia are on it) but the bad news is we’re just looking to make the A main. Which I think (hope) we’ll do.

In the end it’s not much of a prediction that Team USA will be atop the podium yet again and avenging last year’s spanking. The Americans are just too strong rider one through three and most other countries can’t match it. They may not win their individual classes (as a matter of fact, I’d put Roczen, Cairoli and Herlings as favorites) but they’ll be strong enough to be there at the end with the Chamberlain trophy.

But no matter what, this will be a great event and I’m looking forward to it.