Coming off a brilliant MX Nationals championship win, Matt Moss entered the Milwaukee presents Terex Australian Supercross Championship with momentum and career form on his side.

Rounds one and two in Darwin last weekend were a breeze of sorts for the Motul Pirelli Suzuki rider, sweeping to both main event victories in extreme Top End afternoon temperatures.

Just he was about to go diving this afternoon, MotoOnline.com.au spoke to Matt about his success, made even more special by the fact that twin brother Jake followed him home for a 1-2 finish during his first 450 SX win on Saturday. Great result in Darwin, two wins from two rounds – it doesn’t get any better than that.

Yeah, it was an awesome result. I didn’t really know what to expect after Motocross, but the first round was really dominanted by me and Jake, plus Jay Marmont as well. We held our own, Jake and I spoke before the race and said we really didn’t feel fast at all.

We were just trying to maintain what we had, but round one seemed to come a little easier than the second. It was a little bit tougher, I had to come from behind, but I played it safe, bided my time and pounced when I needed to.

I felt really good, so now I look forward to a break and the next round.

There were a few guys who commented that Darwin wasn’t a full-on Supercross track, that it was kind of partly Motocross. What was your opinion on that? And do you feel like coming off the MX may have helped you in some ways?

Sort of, yeah. It was a Supercross track, but [Yarrive] Konsky and the whole Supercross team realise that we’ve only had a week and a half to prepare so they’re not going to build a stupid track that all of us are going to go and hurt ourselves on.

I think they managed the track really well considering the heat. I’m sure a lot of people said it wasn’t really as Supercrossy as they’d like, but I think they did a great job and we’ll prepare for a little bit more technical track at the next round. 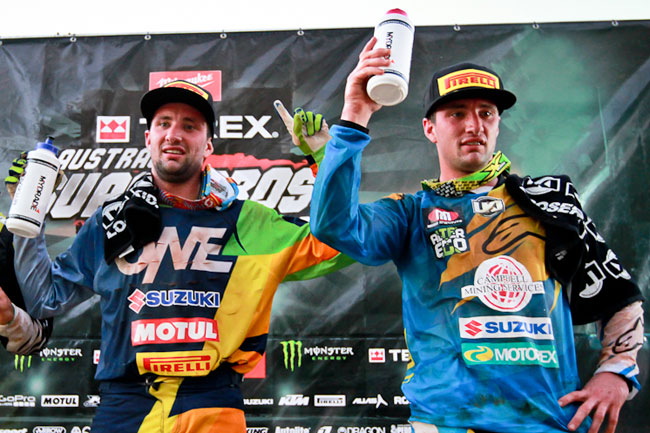 Round one was special cos you and Jake went 1-2, but then the second round you had to come from behind and that was an awesome result for you in itself. What one rated higher?

Definitely the first one. It was my first ever 450 Supercross win so obviously it felt good, and also to cross the line and know my brother was right behind me was surreal as well. It’s good to see him finally do what I know he can do – I think it will come down to me and him, plus a couple of others towards the end.

As far as the team goes, they’ve obviously put in a lot of work in this transition to Supercross as well.

For sure. Jay and Jess Foreman, the whole team, plus my supporters like Moss Institute and AlterEgo Elite, as soon as Motocross was finished it was time to get ready for Supercross.

We didn’t have as much time as we’d like, but we did our testing, the bike was so good and it felt like we’d been riding for a long time.

Perfect, well thank you and well done on the result.