Fresh off dominating the Monster Energy MX Nationals, Serco Yamaha’s Luke Styke carried a full steam of momentum into the opening two rounds of the Terex Australian Supercross Championships in Darwin and came away with his first Supercross win and tied on points with defending champion Gavin Faith.

MotoOnline.com.au caught up with him as he recovered from three days of hard racing in brutal heat to hear his thoughts on the weekend. 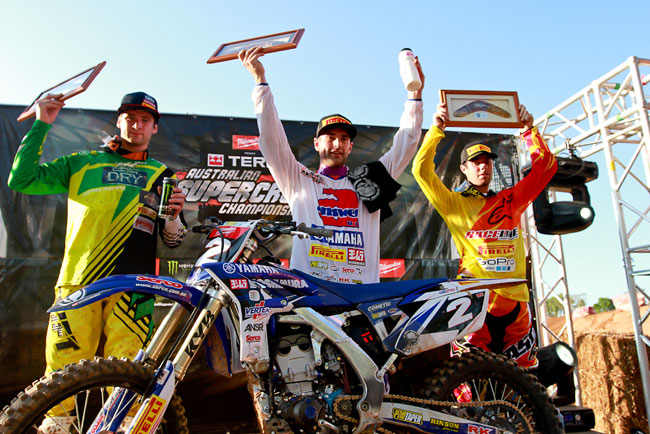 Congratulations on the win, mate. What did you think of the Darwin round?

It was warm! We had practice on Friday and got some track-time, but I skipped two sessions to try and conserve my energy. We had three big days of racing in 30-plus degrees, so I tried to take it easy early on.

In the first heat on Saturday I placed second, then I crashed in a corner while leading the final. Gavin Faith got past me, then as I tried to regroup I had a big moment when I cased the triple. After that I just gathered my bearings and stuck behind him, but didn’t have anything for him.

On the second day I made a mistake in the same corner in the heats and went down again – seriously, that corner was doing my head in all weekend – and Gavin got passed me for the win, then as I lined up for the main I thought ‘I’ve got to get this no matter what’ and just laid it all out there and won the race.

You holeshot every race over the weekend. Was that something you worked on in the lead-up to the series?

Man, the turnaround between the nationals and the Supercross was so short I didn’t have time to work on anything. To be honest I wasn’t even taking the Supercross series seriously and didn’t even really want to do it. I’ve signed to race in Europe and want to focus on that, but at the same time it’s something I’ve been contracted to do.

We’d only had three days of testing before the truck left, so all we could do was get the bike to something we were fairly happy with, then just go with it.

This is my first real Supercross season in two years as I broke my wrist at Phillip Island last year. At the same time it felt really good to get that first Supercross win. I feel like I’ve got a taste for it now and am looking forward to the rest of the series.

How much of an issue was the heat up there?

It definitely was a big factor and I’m glad I had pretty good base fitness, as I think that helped get me through the weekend. It was tough though, as the CDR Yamaha team used our truck as well. We didn’t have as much space as usual and couldn’t fit the motor for our ice bath into the truck. As a result our ice bath was just $60 of ice thrown in the bath and it melted in like two minutes.

Obviously Gavin Faith is coming into this series defending his red plate and it looks like you two could be set for some pretty good battles this year. What do you think are his strengths and weaknesses?

Gavin’s only just came out from the US and he’s been putting a lot of focus on Supercross – I don’t think he even raced an outdoor race this year – so he’s definitely got a lot more track-time and experience with Supercross. But in three or four weeks’ time I’m going to be a lot better and if that’s all he’s got, then I know I’ll be able to beat him. 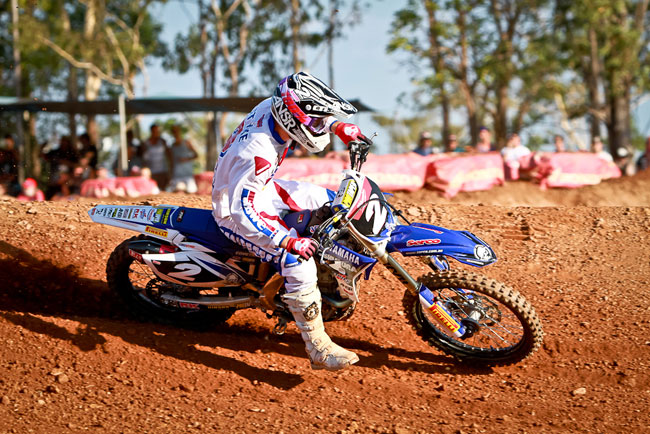 What did you think of the track? It looked pretty epic on-screen.

To be honest I wasn’t a fan of it at all, and I’ve heard the same thing from a few riders now. It was one-lined and the sections were limited. There were no rhythms to really separate the fast guys from the rest and I felt like the track didn’t have any flow. I’ve seen bigger whoops on a 50 track, and that’s one thing I’d really love to see changed for the rest of the series.

I hope Mt Gambier is held at night like a true Supercross should be, not in the late afternoon where the sun is killing your eyes like we faced at Darwin.

How’s it been having Luke Arbon as your new team-mate?

Yeah, Luke’s cool. He’s been doing some enduros and races in South Australia and he’s pumped to have the call-up with Serco. He’s taken the opportunity with both hands, has gelled with the team, and got two solid results on the weekend.

I hope he surprised a few people, I was in the same situation two years ago where Serco gave me a guest ride for Supercross. I worked hard and was rewarded with a contract with the team, so I hope it all works out well for him.

I want to work on everything! I want to get more bike time and to really sharpen my skills at supercross. I want to improve the whole package and get to Mt Gambier stronger, faster, and more dialled in.

Great to see you’re always looking to improve, man. All the best for the rest of the series.