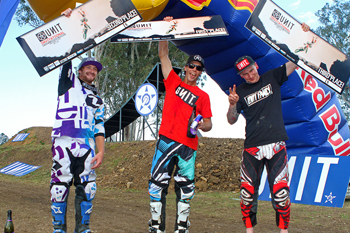 Held at Schubring’s renowned home compound at Boonah in Queensland, the Unit Invitational attracted 17 riders and a 1,000-strong crowd to witness a handful of the sport’s best do battle.

Schubring’s signature style shone above his competition as he excelled on the technical course. He was happy to get the win given dual roles as an organiser and competitor.

“It’s been a big month and I didn’t get as much ride-time as the other boys; I was busy building the course as well as organising and promoting an event, but I’m stoked on how everything went today,” said Schubring.

“The competition was tough and a lot of guys have stepped up. There was a bit of wind out there, but everyone dealt with it and did what they had to do.”

Second place went to Callum Shaw, who recently bought the ‘Schuieville’ property and has had plenty of riding experience on the course.

“I’m pretty pumped to finish second today,” said Shaw. “At the previous round at Coonabarabran I finished fourth and set myself a goal to get on the podium here.

“It feels great to have this first podium under the belt; owning Schuie’s old place has been a big benefit for my riding.”

AFMXC title contender Joel Brown salvaged third from the event despite a qualifying mishap which saw him continue to compete despite suspected fractures in his feet.

“It was a hard day at the office, that’s for sure,” Brown said. “I hit neutral through the double-double section and I took the impact on my heels.

“My main concern was to gain enough points for the series, so after two runs where I tried to keep as much pressure off my heels as possible, I was content to place third and opted out of the top three showdown.”

With a round remaining, Schubring heads the standings by two points over Joel Brown, with Shaw a further five points in arrears.

The fourth and final round of the AFMXC, the Precise Open, will be held at Mackay in Queensland on 19 October.