CDR Yamaha has enjoyed great success with the current YZ450F, winning consecutive titles from 2010 through 2012 thanks to Jay Marmont and Josh Coppins respectively. Simply put, CDR was one of the most successful squads in the world during the recent era of YZ-Fs.

Before that CDR won two titles with Marmont in 2008 and 2009 on the previous YZ450F, but for 2014 we’ll see a new leaf turned with the introduction of an all-new MX1 weapon from the boys in blue.

Season 2013 was a mixed one for CDR Yamaha upon the retirement of former world number two Coppins. They signed fellow former GP ace Billy Mackenzie and Aussie young gun Lawson Bopping returned for his second season at CDR.

Mackenzie quickly adapted to the YZ450F and strung a heap of podiums together on his way to third in the championship, highlighted by a round win at Hervey Bay mid-season. As for Bopping, an untimely dose of glandular fever saw his hopes for a solid season dashed.

Still, it was another strong effort for Craig Dack Racing and Yamaha Motor Australia, despite their haul of five-straight MX Nationals titles coming to a close. Following Coolum’s season finale, CDR Yamaha invited MotoOnline.com.au to test the 2013 YZ450F. For us it marked the perfect opportunity to have former national champion Dan Reardon put BillyMac’s bike through its paces.

The full specification sheet can be found below, however in short the bike is vastly developed in-house by CDR Performance. Coppins still forms part of the team as official test rider, while Mackenzie and Bopping shared their bunch of development work along the way.

Reardon said Mackenzie runs a very unique cockpit on his race bike, magnified by high handlebar mounts that did take some getting used to for the former international.

“My basic thoughts on Billy’s bike are that, although I don’t think he’s much taller than I am, he runs his handlebar mounts in a high setting,” Reardon explained. “Straight away that put my weight toward the rear of the bike and I found it difficult to get my weight forward – especially sitting down. “In terms of how the bike handles, that determines how the bike does and doesn’t work. I found it a lot more comfortable standing up. Billy has an unorthodox style different to most riders and you can see why once you feel his bike set-up.

“Overall the bike was balanced, a lot of fun to ride and actually really easy to ride. That’s a massive bonus when it comes to 450s with an extreme amount of torque.”

Reardon has spent a season riding Yamaha in 2010 on the MotoConcepts and Valli teams at the time, so he has experience on the current incarnation of the YZ450F. With CDR’s success in mind, he said it was clear why the team has had so many good results in a refined package.

“The dynamics of the bike weren’t really surprising when I jumped on the bike, but I do think over the years they’ve developed it to be a better bike that’s more user-friendly,” he added. “The bike is extremely quiet, which makes it hard to believe it has the power that it does! 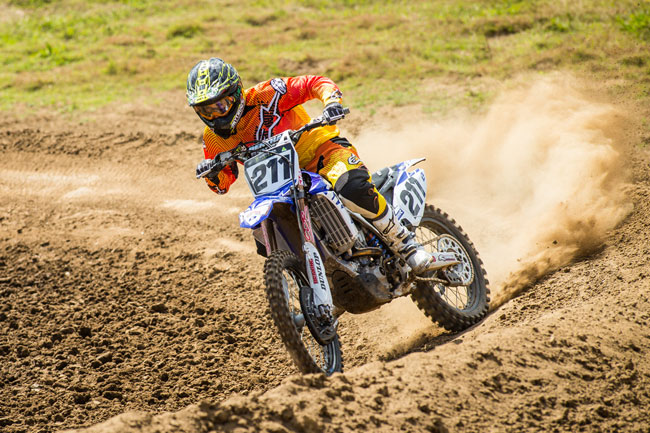 “The amount of torque it has was impressive and that makes a bike easy to ride. You can have high horsepower numbers, but if it’s a light-switch then it becomes not so user friendly. That was a standout for me, the way it pulled out of turns, ruts and that sort of stuff.”

Specifically, the setting of Mackenzie’s YZ450F did take time for Reardon to acclimatise too with just limited laps at Queensland Moto Park, but he understood once combining those factors with Mackenzie’s GP-esque riding style.

“To me it felt like a firmer shock, softer fork feel, but then again it could have been a characteristic of his ‘bar set-up,” he continued. “It felt a little bit unbalanced in my natural riding style, but once I became accustomed to it I felt more comfortable.

“At the end of the day each racer’s bike is custom to them and set-up for their style and preferences. Everything felt good and worked well, just differently to what I had been used to.” 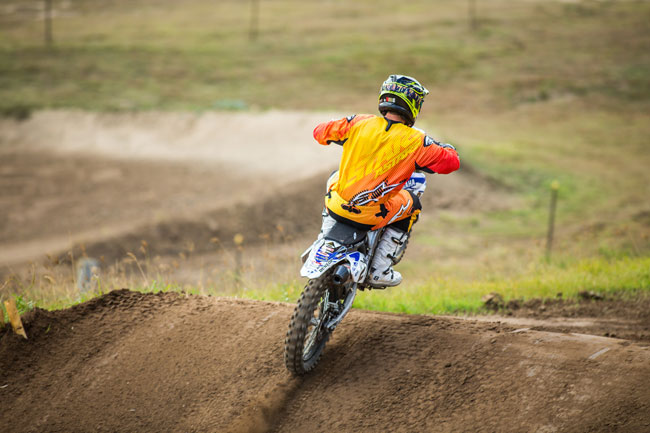 Reardon was impressed with the torque of CDR’s YZ450F. Image: Greg Smith/iKapture.

After recently testing the 2014 Yamaha YZ450F at QMP for MotoOnline.com.au (click here to read), Reardon was able to make direct comparisons to CDR’s 2013 racer. As you’ll read, the future bodes well for CDR and Yamaha.

“In comparison to the 2014, the biggest thing with that bike was how well the new YZ turned straight away,” Reardon commented. “Yamaha has made massive changes from their older model to the brand new bike. Even compared to Billy’s bike, the 2014 turns so much better – unbelievably well.

“As a starting point, I believe the new Yamaha sets the benchmark for production bikes and that the new bike is at such a high level already from stock. It’s going to form an awesome race bike.”

The 2010-2013 YZ450F will go down as one of the finest bikes in CDR’s history after an incredible run, although there’s little doubt that next year the team will be even stronger across the board. That in itself will be something to see!