CDR Yamaha’s Daniel Milner has gone from strength to strength over the past 12 months.

After an impressive outing at last year’s International Six-Day Enduro in Germany, the 22-year-old has been both consistent and stupidly fast through the bush in 2013, only failing to finish on the podium once over the 12-round series.

The Victorian wrapped up the Australian Off Road Championship with a round to spare at Dungog, NSW, on the weekend, so we caught up with him to find out what went down, and what his plans are for 2014. 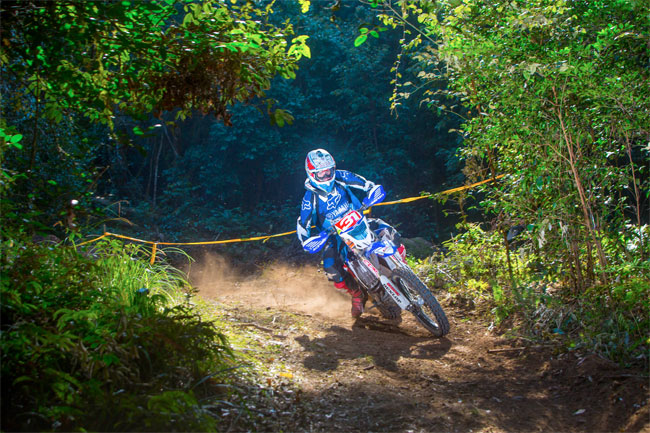 Daniel Milner on his way to sealing the 2013 title at Dungog. Image: FourOhFour.

First up, congratulations on your dominant win, Dan. You carried a pretty handy lead over Chris Hollis coming into the weekend, but you still went out and won both days and stamped your authority on the championship. Why did you decide to go all-out instead of playing it safe?

I don’t really know [laughs]! Coming into the weekend Hollis was 27 points behind me, so I knew that as long as I finished ahead of him I’d be able to wrap the championship up a day early.

How were the track conditions at Dungog? It looked pretty dry and dusty out there.

Yeah, as the day wore on it got really powdery and dusty. We were lucky we had two tracks and went from one to the other instead of wrecking one track all day.

I couldn’t believe how dry it was there compared to Victoria. The terrain is a lot different to what we ride near Warragul – NSW trails seem to be a lot faster and rockier, but with tighter sections as well.

How do you rate the 2013 AORC compared to last year’s championship?

2013 was great. We had a couple of new rounds, which are always fun. The South Australian round was in deep sand in pines, then the new Queensland round was the complete opposite; hilly and rocky.

It seemed like everyone was on it this year too. It was a bugger that Toby Price dropped out with his injury, but it there was always someone there pushing me hard.

We have three different races – Cross Country, Enduro and Sprints – so everyone has their strengths and weaknesses. It came down to who could stay the most consistent over the whole championship.

2013 has definitely been a big year for you, with an impressive Australian Four-Day Enduro victory earlier in the year. What are your aims for 2014? Are you sticking around to defend your titles or are you planning on frying bigger fish overseas?

At this stage I’m sitting on the fence and humming and harring over my options. I’ve ridden for Yamaha my entire career, and I have been talking to a number of teams in Europe – including Yamaha – but if I choose another team I’m going to have to test a bunch with different brands and see which one I like the most.

I’ll know more after the ISDE in a couple of weeks’ time, when I’ve had a chance to meet with a few people over there. 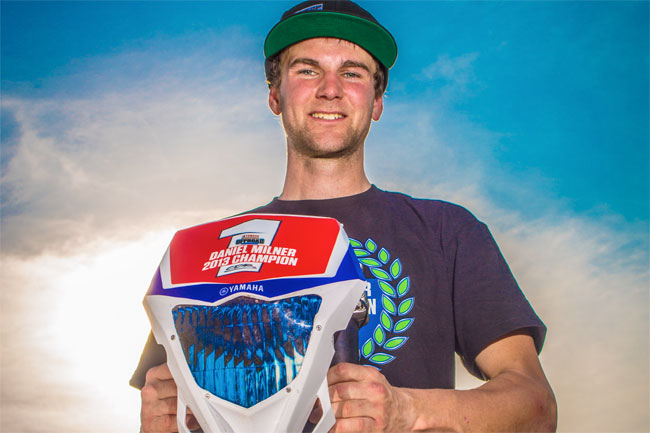 So this year you were under the CDR Yamaha tent after they took over from the Ballard’s Offroad team. How has it been? What have been the biggest differences from last year?

Man, it’s been unreal. Craig [Dack] runs an awesome program and everything is done properly and professionally. It’s been fun and that has shown in my results.

In previous years I was kind of left to my own devices during the week. I’d do what I want and would just rock up to the events and race. But Dack’s always ringing me to see what I’m up to and if I’m doing the right stuff.

The bike set-up, motor work, making sure I’m comfortable on the bike, it’s all been great. It was also my first year with my mechanic, Bryan Fitzgerald, and he’s the best guy I’ve worked with.

You touched briefly on the upcoming ISDE in Sardinia. What are your aims for that?

Yeah I fly out next Tuesday and have a holiday with Hollis and spend some time on the beach. Five days afterwards the Australia team arrives, then we do a track walk and get straight into it.

Last year I finished fourth in my class, 17th Outright and won three tests Outright. This year I’m going to be riding a YZ450F instead of the YZ250F, mainly because it’s ready to race straight out of the box and doesn’t need as much time to get set up.

Until we fly out I’m going to put as many hours on it as possible to get used to it, then head to Sardinia, do my best, and see how I go.

Great stuff. Thanks, Daniel. All the best for the ISDE and we’ll touch base when you get back!

Thanks, mate. Will do.