Moments that caught our eye during the 2013 Australian Motocross Championships.

As the dust settles on the 2013 Monster Energy MX Nationals, MotoOnline.com.au looks back at the series and picks out 10 highlights from what was an epic season. 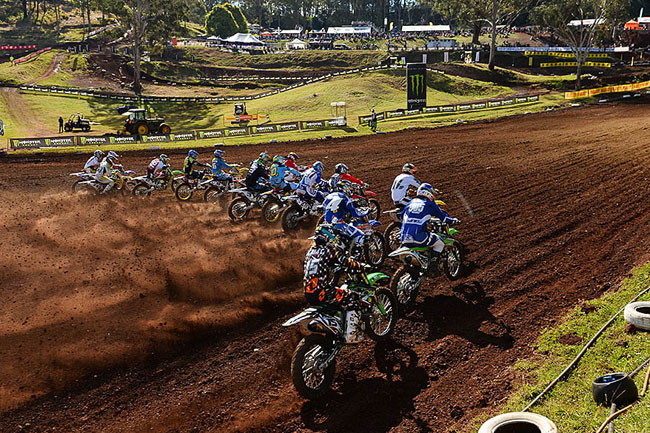 The Monster Energy MX Nationals were a roaring success once again in 2013. Image: Jeff Crow/Sport the Library.

Styke’s stronghold
After coming desperately close to the MX2 title in 2012, Serco Yamaha and their gun rider Luke Styke left absolutely nothing to chance this year. Styke won nine of the 10 rounds, with the only flaw coming at round two at Murray Bridge when he finished behind his teammate Luke Clout. Stykesy was the standout, most dominant rider of the season across all classes and well and truly earned the MX2 title

Moss and Waters rivalry
A brace of injuries (a head-knock before Broadford then later a broken collarbone) seriously hampered Motorex KTM’s Todd Waters’ campaign after a blistering start at the opening three rounds. Motul Pirelli Suzuki’s Matt Moss pounced on the opportunity and quickly reeled in his rival’s lead, until they just a couple of points separated them at Hervey Bay. In the opening moto at Hervey, the two heavyweights found themselves locked into a frantic mid-pack duel that saw both guys trade paint and take take off-track excursions. A heated discussion with officials followed afterwards, and the rivalry was born. Waters and Moss engaged in several on-track stoushes until the end of the season as both desperately tried to bid for the red plate, adding some extra spark and interest in how the championship would pan out.

The MX2 casualty ward
From the middle to the end of the series, the MX2 class – which wasn’t exactly brimming with the depth of talent we saw in MX1 from the start – copped a battering on the injury front. Luke Clout broke his femur at the mid-way point of the season, then Josh Cachia pulled out with a niggling wrist injury at Appin. Kade Mosig bowed out after Hervey Bay after battling through a torn MCL, as Raceline Pirelli Suzuki’s Geran Stapleton sustained a shoulder injury with a big get-off in the Hervey Bay sand. All this relieved the pressure on Luke Styke, and saw some new blood get their chance to taste the podium champagne.

Swanepoel’s win
After such an epic season in 2012, Carlton Dry Honda tasted the bitter taste of defeat and frustration this year. Their hired gun Ben Townley retired just weeks before the MX Nationals began, Ford Dale wrecked his knee at Broadford, Daniel McCoy mutually parted ways with the team mid-season, Josh Cachia pulled out with an injured wrist at Appin, and Queensland teenager Jackson Richardson’s appearance only lasted two laps before he broke his femur at Hervey Bay. Before Appin Honda also enlisted South African Gareth Swanepoel, but his ride looked in doubt after he pulled out of moto two with a suspected fractured wrist. Just two weeks later, Swanepoel again lined up on the start-gate and grabbed an amazing come-from-behind race win at Hervey Bay. An emotional team gathered around him and celebrated as if they’d won the championship – it was heartening to see all the team’s hard work and effort finally return some fruit after a harrowing season.

Rise of the rookies
2013 saw a host of new riders put their names in lights in the MX1 and MX2 classes. In MX1, Motorex KTM’s Kirk Gibbs (fifth overall) and Monster Energy Kawasaki’s Adam Monea (eighth overall) both stood on the podium, while in MX2 Kale Makeham (second), Luke Clout (who won Murray Bridge) and Dylan Long (fifth overall) proved there’s an encouraging amount of depth starting to come through the ranks. 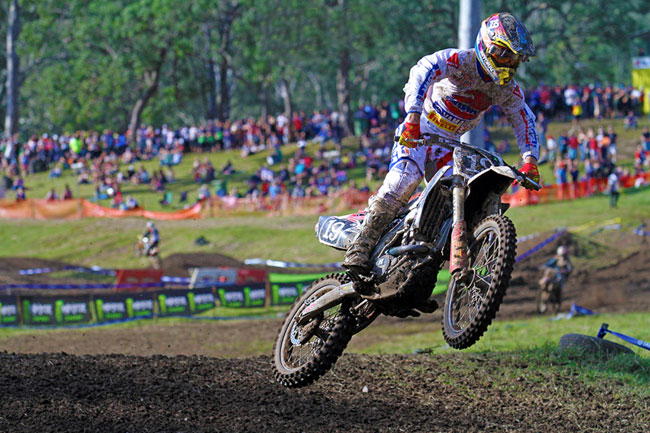 Yamaha’s retro day at Conondale
For their 30th anniversary, Yamaha Australia put on a great retro-themed round at Conondale in Queensland. CDR Yamaha, Serco Yamaha and GYTR Yamaha had their bikes and riders decked-out in super cool retro graphics and gear. The white and red throwback look generated a buzz within the industry and definitely had the older generation reminiscing about their racing days while the current generation of racers rocked the old-school look on track.

Ending with a bang
Few people would argue that the final three rounds of the championship – Swan Hill, Toowoomba and Coolum saw the series end on a high. Swan Hill was an unknown entity, but produced a great track with plenty of lines. Both Toowoomba and Coolum introduced new track layouts that saw some great racing and proved to be a big hit with the riders and fans.

Demmut – thiy dud ut agin!
New Zealand has made a recent habit of sending over completely unknown racers and taking the MXD glory. Last year Kayne Lamont dominated the stepping-stone class, then this year South Island’s Hamish Harwood blindsided everyone with a similar performance, winning the championship with one moto to spare from fast-finishing pre-series favourite Jay Wilson. Before round one next year you can bet the MXD riders will be casting their eyes down the rider start-list and circling anyone with NZL next to their name as a potential threat.

Poling booths
The votes are in and the Super Pole has got the thumbs-up this year. It provided a new element of suspense for those sitting trackside, and it didn’t take long for the teams and riders to cotton on to just how valuable those extra points on offer would be. So valuable, in fact, that the vast majority of round podiums were affected by the points on offer (such as Billy Mackenzie at Hervey Bay, who went 3-3 for first overall, thanks to his Super Pole points).

End of an era
Matt Moss’s MX1 championship win has torn CDR Yamaha’s relentless grip off of the 450cc Australian Motocross Championship trophy. CDR won five championships in a row (four with Jay Marmont from 2008 to 2011 and one with Josh Coppins in 2012), with the factory Suzuki team last claiming the title in 2005 with Kiwi Daryl Hurley. It’s been a long stint between drinks for Jay Foreman’s Suzuki team, making the 2013 victory all the more sweeter.