The season is over here in America, the fat lady has sung. What started out in Anaheim, California in January has ended about 40 miles away in Lake Elsinore, California. In between that was 27 races, three trips back and forth across the country racing Supercross and Motocross all that came with only five weeks off.

Also, hooray for Ryan Villopoto, Ken Roczen, Wil Hahn and Eli Tomac for being the champions that they are and bringing home the trophies, the cash and the chicks that come with it. So with the conclusion of the racing year and with the knowledge I gained from attending 28 out of the 29 races (throw in attendance at one Canadian national as well) I thought I’d talk about some highs and lows of the season.

Best SX Race: I think this one is a tie between Anaheim 1 (I know right? The best race all year was the very first one) and Minneapolis. At A1 we were expecting a Villopoto, Ryan Dungey, James Stewart and Chad Reed showdown but what we got was Davi Millsaps and Trey Canard shadowing each other for 20 laps. It was very unexpected and Millsaps passing Canard back with just over a lap remaining to take the win was, simply put, pretty awesome. It signalled to everyone that all of our predictions were about to be blown out of the water. 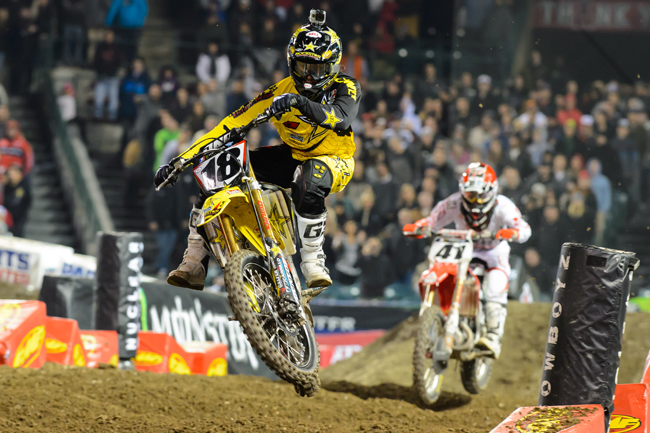 The battle between Davi Millsaps and Trey Canard at Anaheim 1 was a highlight of the Supercross season. Image: Simon Cudby.

Minneapolis was great because it was a man versus man battle between Dungey and Villopoto. And the stage was Dungey’s hometown at the Hubert H Humphrey Dome. The place was going insane, you could hardly hear yourself think as Dungey caught Villopoto in the main event, made the pass and took off with the win. It was an awesome race, no doubt about it.

Worst SX Race: There were more than a few yawners where Villopoto grabbed the lead and took off for an easy win. Even watching the 250SX class was sometimes a little tedious with there being clear divisions between the top two guys and everyone else. Basically the great races were the ones where RV had to work at it for a little bit.

Best MX Race: Not to bag on RV too much here but he sometimes made the racing pretty boring. So with that in mind I’ll go with Millville. Very unseasonable low temperatures must have made everyone else pretty frisky because there was nuttiness in the 450MX class. Villopoto crashed on lap one of the first moto and the crash affected him all day. Somehow, unbelievably he went 6-4 on the day. The first moto was a terrific duel between Stewart, Canard and Justin Barcia and in the second moto it was Stewart and Canard going at it for second behind Dungey. The guys were all over each other and it was a great day.

In the 250s it was defined by Kenny Roczen going down hard and DNFing the first moto which opened the door for Tomac to walk to the title. Simply put, Millville was awesome because Ryan Villopoto was bad. 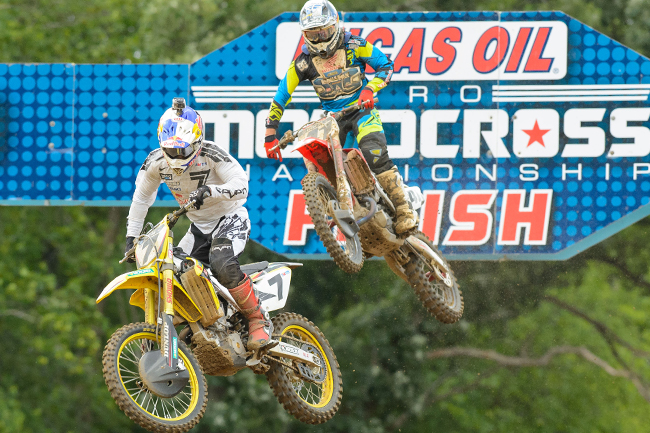 The Millville battle between the likes of Stewart and Canard is up there as the best of the outdoors season. Image: Simon Cudby.

Worst MX Race: I’d say this last weekend’s race at Lake Elsinore took the crown here. It was very hot, the track was hard to see, both titles were wrapped up and it’s a long season that lots of people just wanted it to be over with. Villopoto took off with both moto wins, Dungey went 2-2 and not even Josh Grant leading the first moto could help it out this race. In the 250s it was a runaway in the first and second motos and Tomac just sort of rode around to go 2-2. Yeah, yeah I know Blake Baggett was docked one spot for jumping while a rider was down but technically it was still a 2-2 for Tomac. Lake Elsinore was the race where no one really cared who did what.

Best Rider: Ryan Villopoto. Duh. My second best guy would be Eli Tomac because of his great rides in the outdoors. Yeah he lost the SX title to Roczen but I still felt that he threw that series away himself with his crash in Oakland and I’m not sure Roczen was the better rider – but he was more consistent for sure. But in the end, winning 18 races out of 29 this year (and two titles) in the premier class gets you the nod in this very prestigious column.

“Worst” Rider: Of course this is a subjective “award” and of course Chad Reed isn’t the worst rider around but he gets this award because of his sub-par performances all year. Battling physical problems, a bike he didn’t like and who knows what else, Reed rode around in 2013 like he had a flat tire. At every single race. I think that his lack of off-season work caught up to him and he could just never get it going. Reed didn’t race the last national, returned his Hondas and is working on a new manufacturer for 2014. I think he knows that this is it, he’s a fiercely proud guy and he’s not going out in 2014 with the same results. He’ll be better next year. Than again, it couldn’t get much worse than it was this year. To say Chad Reed’s outdoors campaign was challenging would be an understatement. Image: Simon Cudby.

Best Comeback Team: The Yamaha guys haven’t done much for a long time and the jury is still out on the JGR team and whether they can get the very best riders for the backwards-motor YZ450F but in the 250MX class they finally have some light at the end of the tunnel. As usual a team is only as good as the riders they hire and despite some baffling moves over the years, Star Yamaha seems to have finally done it right. Cooper Webb and Jeremy Martin are terrific riders and showed great speed this year and next year they’ll have an all-new bike that looks to be much better. Now the trick is for Yamaha to hold onto them when the GEICO and Pro Circuit guys come calling.

The What Are They Thinking Award?: Goes to Suzuki for continuing to baffle many in the pits with some of their decisions. A lot of what they’re forced to do is because of not having a lot of money but some of the decisions have been weird. The RMZ 250 and 450 are great bikes, no doubt about it but they basically lost Rockstar Energy Drink and Makita as sponsors and didn’t replace them with anything. That factory team moves to Yoshimura control but there’s no money to hire anyone but James Stewart (Stevie Wonder could have told them that it would be better to have another guy to keep a Suzuki on the track).

Then Suzuki decides to support the RCH crew with a factory bike but after striking out on rider after rider, they sign Broc Tickle who’s a fine individual and a good rider but not someone that you build a program around. Meanwhile the old Suzuki support team Rockstar Racing is still on Suzukis but not getting any help. All they’re doing is winning races with Davi Millsaps, Jason Anderson and Blake Wharton but Suzuki can’t/won’t help them. And did we mention there is NO 250 team at all supported by Suzuki?

And so for 2014 the Rockstar guys are headed over to KTM while the yellow guys continue to hope Stewart stays healthy and finds his old magic, Tickle somehow gains two seconds a lap and Josh Hill’s foot still isn’t jacked up. I understand times are tight for Suzuki but they’re not helping themselves with some of their decisions. 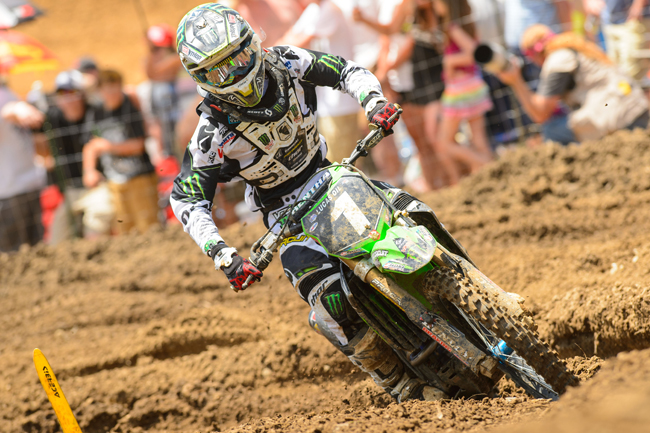 Blake Baggett carried the number one plate in the 250 class for outdoors but a lingering Supercross injury saw him fall well short of back-to-back titles. Image: Simon Cudby.

Worst Season for a Champion: Pro Circuit’s Blake Baggett’s entire 2013 season went up in smoke about five seconds after the gate dropped at Anaheim 1. One of the contenders in Supercross and a favorite to repeat in 250MX, all hopes came crashing down when a flipping bike hit his wrist in the first turn of the first main event of the year. That was it, Baggett’s wrist was broken and into surgery he went to try and get better for the Motocross season.

And it didn’t work. Blake struggled through the outdoors (I suppose a lot of riders would love to struggle to the tune of podiums and one win but it’s relative) and he provided no real challenge to either Tomac or Roczen. Many after race meetings with Mitch Payton didn’t seem to work either and now Baggett’s going in for a second surgery on the wrist to try and figure it out. Blake’s hoping to hit reset on his career next year.

Thanks for the Memories Award: John Dowd finally called it a career this year at the age of 47. The Junkyard Dog has certainly had a great career with two factory rides, national wins and even a 125 SX title! Dowd hasn’t raced full-time for a number of years but he would come out for every Southwick and last summer raced a whole bunch of nationals. The man is determined, fast and a great guy off the track. I saw him straight up beat Ricky Carmichael at Southwick and I had goose-bumps as the fans cheered him on. What a career and what a guy. Thanks John.