Serco Yamaha and Luke Styke are the new 2013 MX2 Australian Motocross Champions, clinching the Monster Energy MX Nationals title at Toowoomba with a round to spare last weekend.

Styke, 21, has been in a class of his own for much of this season, winning eight from nine rounds contested so far and is yet to lose a second moto this year. 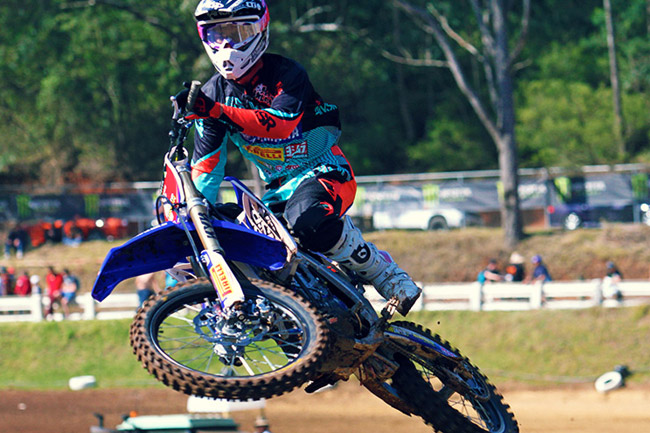 Luke Styke has been the dominant force in the Monster Energy MX Nationals MX2 field all season. Image: Simon Makker/Makkreative.com.

Congratulations on the championship. You did it in style via the win in moto one, so it must be an awesome feeling to get this wrapped up?

Yeah, you know it was good. I really wanted it in that first moto and I was going to do anything possible. Hats off to [Kale] Makeham, he rode real good, but I can’t thank the Serco Yamaha team enough. They get the bike working 100 percent every weekend and work such long hours.

It’s a great team, surrounded with good people, plus my trainer Bernie McNeil helped me every step along the way so it’s awesome.

The team was very emotional after you clinched this championship. Considering you came so close last year, does that make this one even more special?

Oh for sure. We missed out with a mechanical last year, but I know the team worked so hard within themselves trying to get the results, but yeah, it’s all good!

As far as today goes, you battled the whole way with Kale and made the move stick at the end. It looked like a really fun race…

Yeah, it was probably one of the best motos I’ve had all year and he definitely rode good. Obviously I just wanted it more and was willing to do anything it took, so it was great. Styke was clearly pleased to wrap up the title in the first moto of the day. Image: Simon Makker/Makkreative.com.

How about moto two, debuting the number one, you came out strong and just dominated – was it a case of pressure off?

I’m not sure. I haven’t lost a second moto all year so I didn’t really want to start now. The Serco Yamaha got out of the gates super good and I rode my own race. It happened easy, everything fell into place and it was a case of going through the motions.

I have to speak to my manager Glen Dempsey and hopefully we can make a bit more of an approach over the next couple of days. It’s not rock solid yet, but my intentions are to go to Europe.

Well done again, you’re a deserving champion and we look forward to seeing you there in Coolum.