Moss claimed the overall after qualifying second in Go Pro Super Pole, winning the first moto and then scoring second in the final 30-minute moto of the round.

For Moss he now has a 25-point lead in the championship heading into Coolum’s season finale next Sunday.

“The Superpole sort of helped me out today,” said Moss. “I just wasn’t feeling good all day. I just couldn’t find my rhythm and it’s lucky the bike is working awesome.

“I’ve been sick all week and I knew this was going to be a tough race. I had nothing for Gibbs in that last one, he just checked out. I just thought that Todd hadn’t gone past me so I had still had the points so I just focused on that and I’m happy to get the overall.” 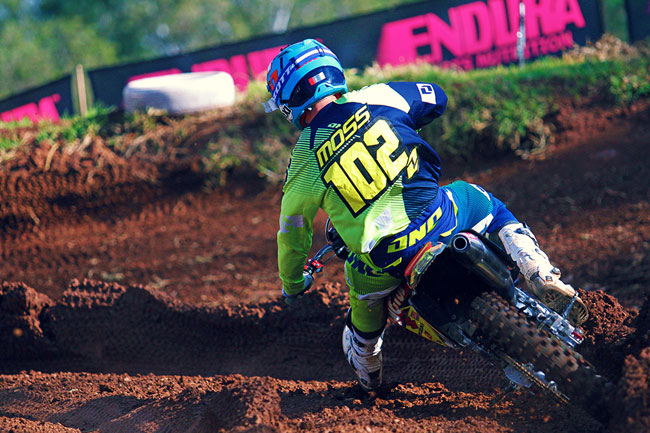 Runner-up for the weekend was rookie Kirk Gibbs (Motorex KTM), who starred with a runaway second moto victory in gruelling conditions. Earlier, he finished second behind Moss in the first moto after leading much of it.

“I got the two holeshots today and you can’t do much better than that really,” said Gibbs. “Hats off to Matt and Todd, they rode really well today.

“Matt got me in that first race but we had a good battle. In the second race I was just trying to focus on myself and ride my own race, and it worked well.”

Completing the podium was Gibbs’ teammate Todd Waters, who faces a tough task if he’s to challenge Moss for the title next weekend, but remains certain he can step up when it counts.

Waters was third in moto one, but a frustrating crash forced him to settle for sixth in the final moto of the round.

“It was tough today,” said Waters. “I’ve got to hand it to Mossy and Kirk. These guys are riding unreal but I enjoyed it today. It was a tough day but I had a ball out there.

“In the first moto the guys got a bit of a gap on me and we just maintained that. In the second moto I was able to make a bit of a charge in the first few laps.

“I got up to them and got to the back of them and made a mistake. It doesn’t matter, it’s all good fun, now I’m looking forward to Coolum.”

Mackenzie was fifth in moto one, but he too crashed in the second while on a charge and had to settle for a lowly seventh. His teammate Lawson Bopping was forced out with Glandular Fever discovered during the week. 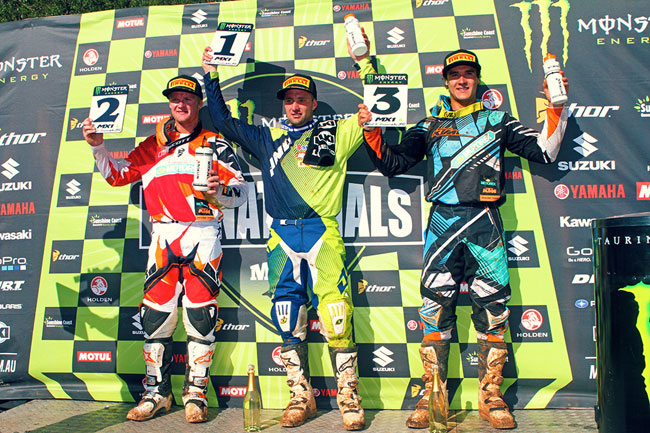 Monster Energy Kawasaki’s Adam Monea was sixth, finishing eighth in moto one before rebounding to a solid third in the second. Teammate Jay Marmont was close behind in seventh after the pair did battle throughout the round, trailing with 7-5 results.

In the Motul MX2 ranks it was Serco Yamaha’s Luke Styke who clinched his maiden professional title with a perfect 1-1 performance aboard the YZ250F.

Styke wrapped up the title with an epic moto one win, stalking arch-rival Kale Makeham (Tune Tech Racing KTM) until the closing stages before making a move stick and sealing the series.

In moto two, debuting the number one plate, Styke was simply in a class of his own from the outset, streaking away for an unchallenged moto win. He hasn’t lost a second moto all season.

“The Serco Yamaha pulled nicely out of the gate there, I pulled a pretty comfortable lead early on and just rode my own race,” said Styke. “It just happened easy.

“I had a really good race with Makeham in the first race and he definitely made it hard for me, but I was determined to get the championship in the first moto so if anything happened in the second one it was all good. I’m sure when I go home and get settled it will sink in.” Luke Styke clinched the title for Serco Yamaha and debuted the number one plate in moto two. Image: Simon Makker/Makkreative.com.

Makeham was content with second for the weekend, his confidence growing each and every moto as he races to battle Styke at the front. His day finished with 2-2 results.

“We’re still on the podium which is good and as the rounds go on we’re getting closer and closer,” said Makeham. “It’s a bit of a bummer that there’s only one round to go as I feel like I’m really coming into my own now.

“That first moto was really good, I was happy with that and that was everything I had. The second moto I struggled there at the start, I was maybe a bit tight and took a while to get up there but did get there eventually. Each round I’m progressing and taking a step forward.”

Completing the podium was another 250 SX two-stroke in Brock Winston (Choice Motorsports KTM). The Queenslander was fourth in moto one and almost runner-up in the second, before Makeham demoted him to third late in the moto. Still, he was satisfied with his second overall podium in a row.

“I’m just getting comfortable with the team now,” said Winston. “I just wish I started the season with them, I thought I would have been a bit further up.

“He (Makeham) definitely pulled it out on that last lap, I thought I had him for sure, he rode really well and got me. I was pretty happy though, I passed a few and still got up there for a result.”

KTM privateer Dylan Long was fourth overall for the weekend with an impressive 3-4 scorecard, continuing his late-season surge on the SX-F.

Hard luck story of the round was Takeshi Katsuya in 12th, the Honda rider finishing fifth in moto one and then forced to pit in the second while running behind Styke. He ended up 19th. 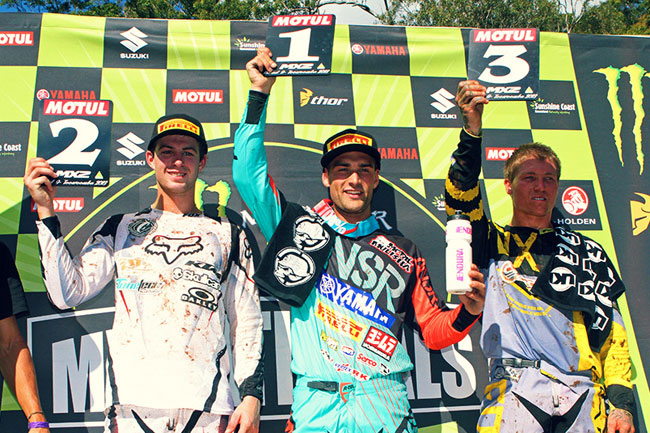 The Pirelli MXD ranks was topped by GYTR Yamaha’s Jay Wilson, who was second in moto one before overcoming the two-stroke horsepower in moto two for the race and round wins.

It was another standout season second-half result for Wilson, proving that he can battle with the best in the category on a 250F.

Kiwi Hamish Harwood (CMR Red Bull KTM) stretched out his advantage in the series, claiming second overall via 1-2 finishes and now taking an 53-point lead into Coolum ahead of Wilson, who’s jumped to second.

Completing the podium was impressive NSW-based Yamaha privateer Corey James aboard a YZ250, scoring a pair of thirds during the motos in Toowoomba.

Kawasaki rider Jesse Dobson was fourth with 8-4, ahead of returning Yamaha rider Jake Emanuelli who was fifth in moto one and eighth in the second. 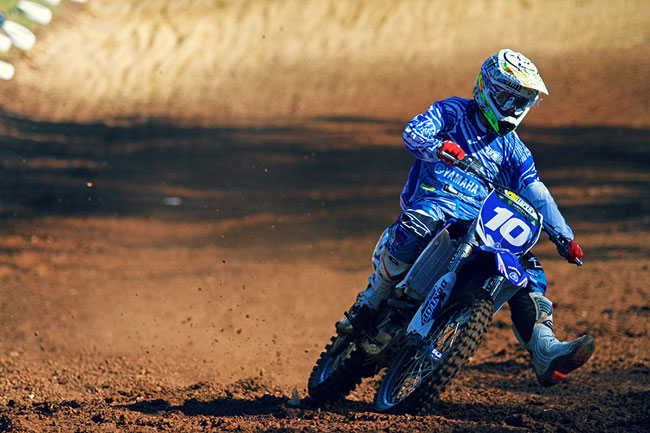 The Monster Energy MX Nationals will conclude at Coolum on the Sunshine Coast next weekend on 31 August-1 September.