Updated: Reed sidelined for reminder of 2013, focused on A1 return

Australian icon Chad Reed has opted out of this weekend's final round of the Lucas Oil Pro Motocross Championship at Lake Elsinore in California. 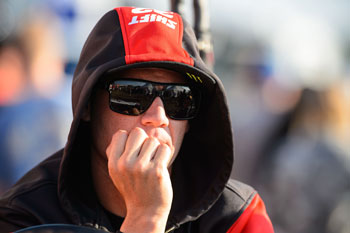 Chad Reed will sit out the remainder of the 2013 season. Image: Simon Cudby.

Australian icon Chad Reed has opted out of this weekend’s final round of the Lucas Oil Pro Motocross Championship at Lake Elsinore in California.

“All’s well! See y’all in Anaheim,” Reed Tweeted earlier this morning from the US.

It’s been a frustrating season for the popular 31-year-old, finishing fifth in Supercross despite skipping the Houston round after undergoing knee surgery. Reed racked up podium results with third at both Anaheim II and St. Louis.

During the outdoor season Reed has again struggled to reach peak form as he’s battled to gain 100 percent health, currently 15th in the standings after 11 of 12 rounds. His best finish of eighth overall came at Washougal and Spring Creek.

Last weekend at Miller Motorsports Park in Utah, Reed exited the circuit during moto one and sat out the second moto of the weekend to conclude his season.

With the announcement, Reed has now confirmed he won’t form part of Team Australia at the 2013 FIM Motocross of Nations, to be held at Teutschenthal in Germany on 29 September.

“Toughest decision when you have to make the call to not represent your country,” he added. “Will miss the opportunity to put on the GREEN AND GOLD.”

Motorcycling Australia is expected to announce the official Australian team next Monday, 26 August, following this weekend’s penultimate round of the Monster Energy MX Nationals at Toowoomba.

Reed’s Tweet also confirms that he won’t contest Las Vegas’ annual Monster Energy Cup on 19 October and cements speculation that he won’t participate in any rounds of the upcoming Australian Supercross Championships.

Click here for more on Reed’s decision in the latest US Report published today by Steve Matthes on MotoOnline.com.au.