The night that boosted Davi Millsaps to a stunning 2013 American Supercross campaign.

When Davi Millsaps stormed to the opening round win of the 2013 Monster Energy Supercross, an FIM World Championship, series in January, it was a result that took the moto world by storm.

Was it sheer luck? Did he fluke it? Could he do it again? In time, the likeable Rockstar Energy Racing rider would prove that ultimately he was a legitimate championship contender.

Speaking of the A1 win post-race, he admitted that it was a surprise performance, but a real confidence boost to open his championship account. Following a battle with Trey Canard that went down to the wire, Millsaps proved he was willing to fight for the W.

“When Trey Canard passed me I was like ‘ahhh man, this is like Salt Lake City all over again’,” he reflected on Anaheim. “I knew I had a good line though and I just pinned it in the whoops and I got back by him. I don’t think anyone really expected this. 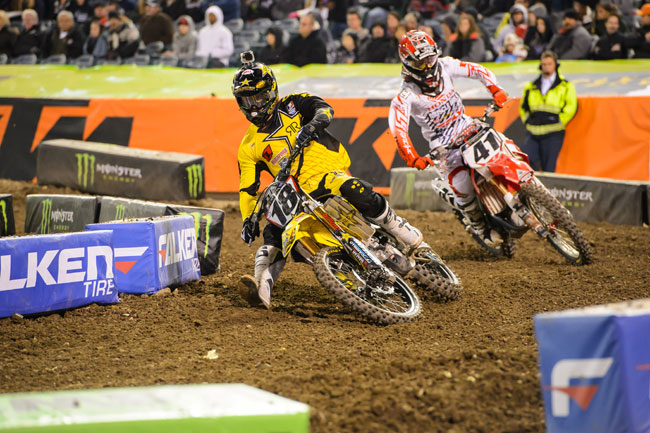 “It was a new program, bike and team for me. We’ve all been working really hard during the off-season to come out and do the best we can. To see where we are and where we need to be. Even though we won, it’s all building blocks from here.

“We’ll go back and see how we can make it even better. It’s been like that the whole time. It’s really cool that Rockstar Energy Racing, Bobby Hewitt and Dave Gowland have given me the opportunity and stood behind me. It’s like a family.”

From that point, Millsaps raced to 12 podiums of the 17 rounds despite a mid-season knee injury that would go on to affect his title hopes. Straight afterward, he was admitted to hospital for knee surgery that would force him out of the nationals.

Funnily enough, he rated his round win at San Diego’s sixth round – where he led from flag to flag – as his best of the season. 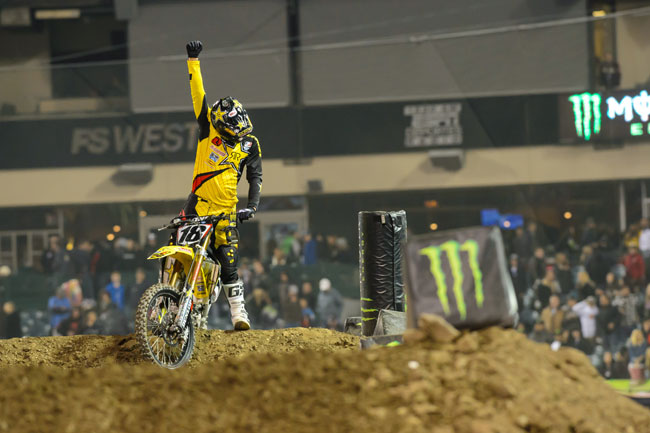 Millsaps was in career-best form throughout the 2013 title chase. Image: Simon Cudby.

“I think this win is a little cooler than the one at A1 as I’ve never gotten the holeshot and led all 20 laps of a main event before. For me, it was really special that I led the whole race without getting passed.

“You can’t take anything away from the Anaheim 1 victory though – everyone wants to come in and win that one, the season opener is a special one.”

So after a positive 17 races back aboard a Suzuki RM-Z, Rockstar Energy Racing today announced they’d be switching to factory-spec KTM machinery for 2014. The question is, can Davi back up his form from 12 months prior when the gates drop at Angel Stadium in January?