It was his first round wearing the MX1 class red plates, and with two more moto wins alongside his victory in Super Pole, the 25-year-old was able to build upon his points lead with just two rounds left in the books.

MotoOnline.com.au caught up with Matt following his successful weekend. Matt Moss was in form from start to finish on Sunday. Image: Jeff Crow/Sport the Library.

First of all, congratulations on what was pretty much a perfect weekend for you, a real solid performance at this point in the championship.

Yeah it was, it was actually really good. I was hoping to try to get one of those days where you win the Super Pole, win the holeshot and win both races at Broadford but it just didn’t happen. This weekend things just clicked. I’d done a lot of riding during the week and felt really good.

Being in the championship hunt with only two rounds to go, it’s just letting Todd [Waters] know I’m going to go down swinging, I’m really happy with it.

As this championship goes down to the wire it’s going to get more and more heated between Todd and yourself as the points are pretty close. How do you feel like that battle is evolving?

It’s good. We’re both racers and we both want to win. I just feel like he’d done a bit of a dirty move and I’m going to voice my opinion. I’m not just going to sit there and be a pussy and let him think he can do that to me – I let him know if he did it again I’d do it back.

We’re both champions and I think we can race better than that and having to hit each other, so I don’t care whichever way it goes. If he wants to get dirty I’ll go that way, but I ultimately I just want to get out there and win a championship.

You’re 11 points up now, so you extended your lead at Swan Hill. These final two rounds are on consecutive weekends, so how is your mindset heading into those two?

Good, I can’t feel any better. Everything has gone better and better each week, with each round, we’re improving. It’s just one of those things, I think it’s hard to get back on top. Now that I’ve reached there and consistently staying there I think that is where you’re going to have trouble trying to get inside me and beat me, I think you’re going to have a hard time doing it. 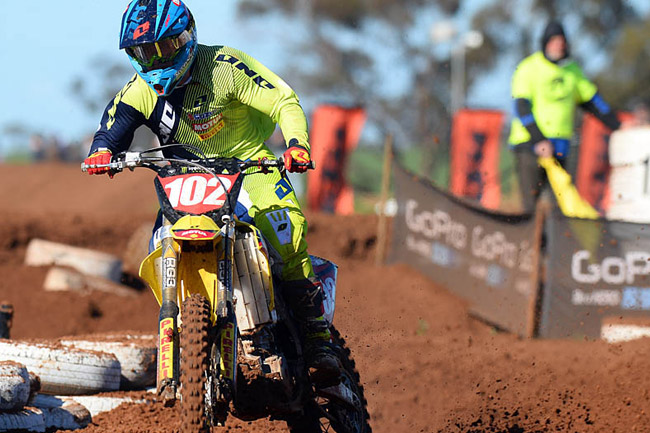 Moss said the Swan Hill track has been his favourite of the year so far. Image: Jeff Crow/Sport the Library.

The problem is right now that there’s not too many people to separate me and Todd. That’s the thing, even if I do have a bad race, I still think my bad race will be top three. I really like Toowoomba so I’m looking forward to that.

We’re pretty used to seeing you with the red plates on in the Lites class, did you feel any added pressure having them on the 450 or is that not something that bothers you?

Obviously it’s a little bit more pressure, but I’ve dealt with it before and I feel comfortable where I am right now. In my head I feel like I’m going to win the championship and I think you have to have that. I have no doubt in my mind it will be a close one, but I think I’ve grasped it now and I think it’s in my hands to hold on to.

That was the series’ first visit to Swan Hill over the weekend. What were your thoughts on that track and the facility?

Considering your championship position now, a lot of people are turning their attention to Supercross and those initial testing phases. When does that start for you?

It’s all good, I’ve been riding my Supercross bike and it feels good. My main goal is Motocross but obviously our championship starts really early, so we do have to prepare for that.