The 2014 Yamaha YZ450F is a vital model release for the highly acclaimed Japanese brand. An all-new bike from the ground up, MX1 sales and on-track results are sure to rise upon the release of this bike following a successful launch at Queensland Moto Park.

With over 40 guests on hand attending the national release, including YZ450F project leader Hiroshi Ito and engine development project chief Masato Yokoi, there was little doubt just how important a position introduction of this bike is for Yamaha Motor Australia.

Yamaha had a full house of race teams on hand for the launch including the complete CDR Yamaha and Active8 Yamaha teams, as well as Serco Yamaha and GYTR Yamaha staff.

As for us, MotoOnline.com.au brought along 2007 MX1 MX Nationals, Australian Motocross Championship, winner Dan Reardon to evaluate the 2014 Yamaha YZ450F at the South East Queensland facility. Since retiring at the end of last year and forming the Alteregoelite training company, Reardon has kept ultra fit and can still ride at a pro level. During the launch we had two tracks at our disposal, including a Motocross circuit, as well as a faster, more open natural terrain track that many of the top professionals train on in between national rounds.

When Yamaha introduced the YZ400F in 1998, it was the beginning of a new era that would eventually see four-stroke engines become the class of modern dirt bikes globally. Since the, between that model, the YZ426F and the various versions of the YZ450F, Yamaha has clinched eight world titles, two American Supercross series and one American Motocross crown.

Right here in Australia, CDR Yamaha has clinched the past five consecutive MX1 titles in the MX Nationals – four to Jay Marmont in an unbeaten run with Yamaha and one to current champion Josh Coppins, who retired at the close of the 2012 season.

Yamaha had some very specific design goals when piecing together the 2014 model. Engineers wanted it to be the tightest turner, to have the most power that’s still controllable, to be the most functional and the feature the best gear shifting in the game. The Yamaha YZ450F has won the past five MX1 class titles in the MX Nationals. Image: FourOhFour.

All new for this year is the compact chassis with revised suspension for increased front-end grip. Mass centralisation is key for improved handling, plus engine and gearbox revisions increase power with the emphasis on control for greater traction.

More specifically and importantly, the gear ratios have been revised with a new shape third pinion gear with 20 teeth instead of 18, plus the third wheel gear goes from 23 to 26 teeth. In addition, the fifth wheel gear is a new shape. It’s designed for easy torque in first and second, before strong power comes on from third through fifth.

The engine retains its rearward slant to centralise mass, has a four titanium valve cylinder head, a new high performance ECU, an offset cylinder to reduce friction power loss and of course has an accessory Power Tuner to adjust air/fuel mixtures at the press of a button. 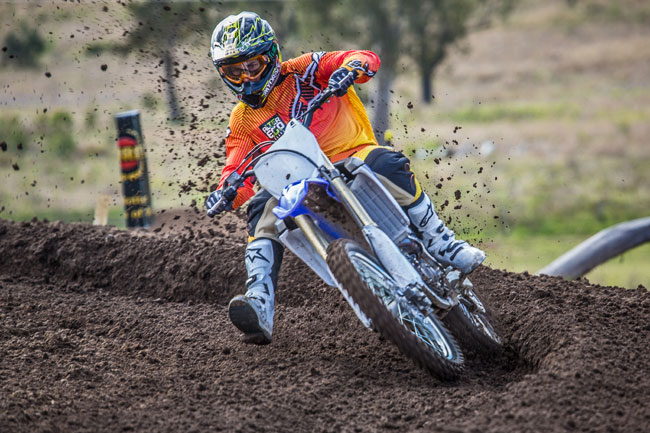 Yamaha pieced the 2014 YZ450F together with a number of specific design goals. Image: FourOhFour.

The bilateral beam frame has a head pipe 10mm closer to the rider, which allows more weight to be transferred over the front for added grip. The frame rail has been repositioned and is a new shape. Overall, the frame dimension is similar to the YZ250F and has 10 different types of forged, cast and extruded aluminium parts that are welded together in one unit.

Yamaha has opted to keep the twin chamber speed sensitive forks from KYB, rather than the air version introduced by Honda and Kawasaki in 2013. The tubes are still 48mm, but with a revised rigidity and the surface finish of the inner tube has been changed. Settings are optimised to match.

At the rear shock, its reservoir has been relocated to the left-hand side away from the heat of the exhaust, and the spring rate and settings have been revised to suit the new chassis. Speaking of the exhaust, it now wraps around the engine and is a far cleaner design than what was previously adopted. 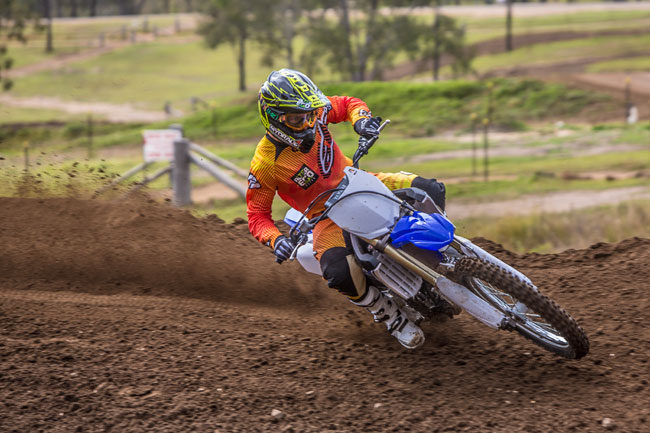 Reardon was surprised at how well the 2014 YZ450F steered. Image: FourOhFour.

On top of all that, new top triple clamp combined with the larger axle increases rigidity. There’s a new high volume air cleaner, which has a quick release at the front of the seating area and quieter air induction. It’s 14mm narrower at the air duct. The lower fuel tank is now 7.5 litres and can be easily filled via the frontal region of the two-piece seat.

And if you’re looking to upgrade your ride with genuine accessories, the Yamaha Genuine Parts and GYTR catalogues feature no less than 53 accessories in total – 20 of which are brand new for 2014.

As you’ll be well aware by now, Yamaha engineers have left no stone unturned on this 2014 Yamaha YZ450F. Vitally, all indications at the launch point toward a successful overhaul that was echoed by Reardon and the factory team riders on hand.

While the straightforward improvements such as slimmer ergonomics and brand new styling were impressive from the outset, Reardon was really able to extract the in-depth character of the new model in comparison to the previous editions. He raced a YZ450F in the US during 2010, so he’s vastly familiar with the model. 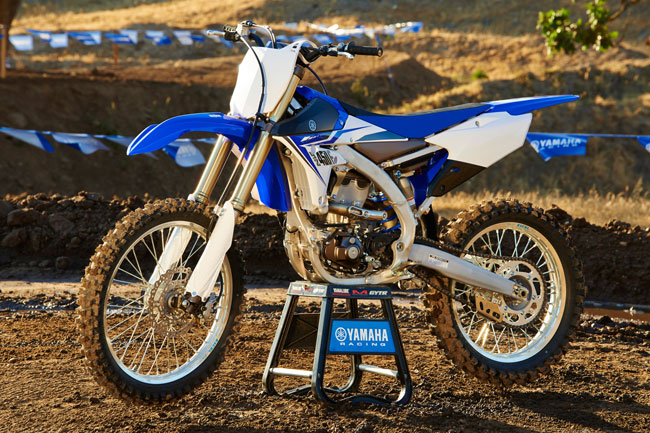 A major change for 2014 is a more compact chassis with revised suspension for increased front-end grip.

“The bike definitely surprised me,” Reardon commented. “Firstly, how well the bike steers. When I was racing the bike in 2010 we were always chasing that, but today we made the complete opposite changes and we were actually chasing a little bit of stability through the longer parts of the track.”

And that comment right there indicated just how different the 2014 model is in comparison with its predecessors, as Reardon continued.

“The chassis is far better than it has been in the past and straight away I felt comfortable,” he added. “It gave me that sense of knowing exactly what was going to happen and I could turn the bike exactly where I wanted it to go. You feel strong on the bike, so I think pro riders will enjoy this a lot more.

“They’ll be able to turn and change direction a lot easier in race conditions and that will transfer over nice and easily to the general public and the guy that just wants to get out there on the weekend and have some fun.” 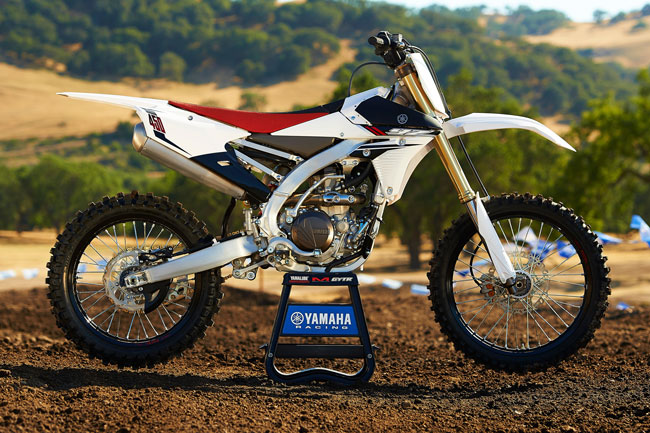 The new YZ450F is also available in a white/red colour scheme.

The engine on the 2014 Yamaha YZ450F is a key aspect of the revisions made by Japanese engineers, which also were clearly an added benefit for Reardon across the course of the launch.

“The engine was really good as well,” he said. “It has a really long, smooth power curve and I believe they brought third gear back [closer to second] as well. I’m not at the level I was a couple of years ago, but I tend to use third in a lot of the turns.

“The pros will be running third nearly everywhere. In saying that, second is still long enough for the average guy to be able to let it last through the turns, then they can jump into third when they head down the straight.”

And for Reardon at the end of it all, the launch provided ample opportunity for him to get a feel for the YZ450F’s fresh new characteristics. Needless to say, he was excited with what’s to come for Yamaha in 2014.

“Overall it was an awesome day with Yamaha Australia’s teams out here,” he reflected. “We had the chance to ride two different tracks, which was great because it allowed us to test in completely different conditions and I had a lot of fun, for sure.”

Yamaha Motor Australia is yet to confirm a release date or official pricing for the 2014 model YZ450F, however stay tuned and we’ll post the information as soon as its available. It’s fresh, fast and a whole heap of fun – exactly what we all look for in a new generation Motocrosser.