Well it’s August now and as the AMA nationals wind down the temperatures start going up and the riders who are without a contract start getting more and more nervous. Yep, like the migration north by the Canadian geese, riders without contracts start migrating into different teams semis after the races have wound up.

Every year there’s riders looking to get out of deals, get new deals, stick with their old deals and it’s at times quite comical over here as riders that are “locked in” get new teams and other riders that can’t stand their team re-up with their old squad. The contracts signed in the sport often don’t seem to matter one way or another, if a rider wants out then you as a team don’t want to force a guy to go through the motions and you let him go. And the flip side is true, over the years there have been plenty of teams just tell a rider that has an existing contract to beat it. And if they don’t like it, see you in court (which never happens).

So with all that in mind here is the first edition of the American rider shell game and remember, all predictions and thoughts in here are subject to change at any time given the whims of riders and team managers.

Honda Muscle Milk – Trey Canard and Justin Barcia will both stay there for 2014 and will be in their last years of their contracts. I hear that Honda would like to take on a third rider (likely pretty cheap) but team manager Dan Betley denied that to me. Not that his denial means anything. Betting odds this team stays exactly the same in 2014. 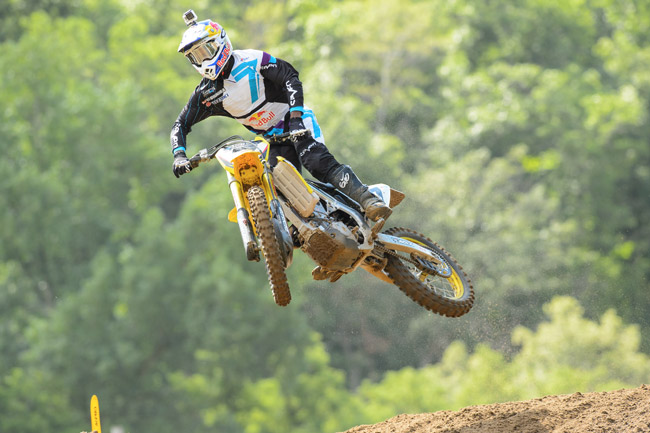 James Stewart could be joined by a second 450 rider on the team for 2014. Image: Simon Cudby.

Monster Energy Kawasaki – Ryan Villopoto and Jake Weimer will be back for 2014 with Weimer in the last year of his contract.

Red Bull KTM – Ryan Dungey signed a new deal for 2014 and 2015 with his same team, Kenny Roczen will move up to 450’s and Marvin Musquin will stay in 250’s. I wouldn’t rule out the team adding another 250 rider (Joey Savatgy perhaps?) to its squad.

JGR Yamaha – Justin Brayton will be back next year and the team is currently deciding on whether or not to sign Josh Grant as well. Grant’s had some good races lately, owner Coy Gibbs likes him and I bet both sides get it done and JG stays there in 2014.

Yoshimura Suzuki – James Stewart will be back, he’s got one more year on his contract with the team and Team Manager Mike Webb told me at Redbud that he’d like to add another rider on a 450 but didn’t know if he could get the budget. If he does, I hear Blake Baggett would be a choice and perhaps Malcolm Stewart.

Monster Pro Circuit – Rumors are the 450 team is going to go bye-bye and Dean Wilson’s deal to stay with the team on a 250 for SX and MX is “90 percent done” according to my sources. Adam Cianciarulo will be there for a while Martin Davalos, Justin Hill and Darryn Durham will all be on their last years of their deal.  I wouldn’t be surprised if one of those three riders just “finds” himself on the outs with the team already having plenty of riders. Blake Baggett has a deal for next year but I keep hearing he’s looking for a 450 ride for some reason. Not sure what’s up with that. If he leaves, one of the other guys above will probably be saved from the chopping block. Tyla Rattray will move on and look to find a 450 ride in America or in Europe for 2014.

GEICO Honda – This team’s got some good momentum going and will have a brand new semi-truck in 2014 that will house 450 riders Eli Tomac and Wil Hahn. Hahn will most likely drop down to 250 for motocross. On the 250 side they’ll have Zach Bell, Zach Osborne, Justin Bogle and amateur kid Matt Bisceglia.

Team TwoTwo – Owner Chad Reed will keep rider Chad Reed for 2014 and I’m sure the negotiations were tough. Reed may be on another colour however as his Honda deal is up (and if I were a betting man, I would bet he does switch OEM’s). Reed desperately wants to add another rider and if he switches colours, you can bet the new OEM will give him the support he needs for a teammate. 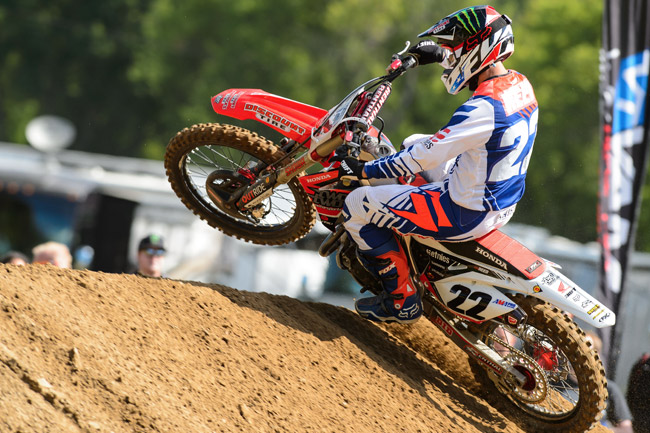 Speculation is rife that Chad Reed could change manufacturers for 2014. Image: Simon Cudby.

Star Yamaha – They’ll have promising rookies Cooper Webb and Jeremy Martin back for 2014 while veteran Kyle Cunningham’s contract is up. They may sign Kyle back but you’ve got to think that with an all-new Yamaha YZ250F coming out, the team will be looking to have more than two riders out on the track.

RCH Suzuki – They’ll bring Broc Tickle back and because they’ve struck out with getting Davi Millsaps, Jake Weimer, Eli Tomac, Dean Wilson and probably others under their tent in the last two years, I bet we see Josh Hill back for a Supercross-only deal. There is some talk of Grant going here though.

Rockstar Suzuki – This team may be exactly the same or could be radically different. The rumors are they may switch brands next year as we’ve all heard about their (lack) of support from Suzuki this year. And if they switch brands, the word is they could go blue. Any other colour of bike and Davi Millsaps would be able to get out of his contract (or maybe the team could keep him on a Suzuki). Jason Anderson will be back no matter what, no one knows what’s going on with Blake Wharton and Ryan Sipes is looking for a 450 ride. This team could be vastly different in 2014.

BTOSports KTM – They’ll go with a two man squad of Andrew Short and Matt Goerke for 2014 while veteran Michael Byrne looks to be needing a ride with the addition of Short this year.

Motoconcepts – They’ll be back with Mike Alessi and probably another 250 rider. You have no idea how hard it was to type this and not make a laser joke.

N-Fab Yamaha – This team will try to keep Phil Nicoletti for 2014 and they look to add some more guys. Weston Peick and Christian Craig are being targeted from what I hear.

Troy Lee Designs Honda – They’ll have Cole Seely, Jessy Nelson, amateur Shane McElrath and someone else. Word is they want to keep Malcolm Stewart on the 450 for motocross but because the team is a west coast SX only 250 team, Stewart would have to ride 250’s, which for him, would probably, suck.

Like I said, don’t hold me to these predictions and thoughts, things could change at any time but this is, for now, what I believe is going on inside the pits. Stay tuned!