Monster Energy MX Nationals championship protagonists will slog it out again this weekend as Hervey Bay’s Dundowran Park facility gets set to host the seventh round of the series.

At the top of the table the focus will be on the form of Motul Pirelli Suzuki’s Matt Moss, who recorded his second overall MX1 class victory of the season at Appin to close within four points of Motorex KTM’s Todd Waters.

Waters is recovering steadily following the collarbone surgery performed prior to Appin, and will be striving for a solid result this weekend in order to keep his grasp on the title.

Moss’ Motul Pirelli Suzuki teammate Cody Cooper also took a moto win at Appin, and the experienced Kiwi is ranging up quickly on a top-three placing in the title race.

Kirk Gibbs showed strong form at round six, and was able to accrue equal points to Cooper for the round as his rise within the ranks continues.

The CDR Yamaha pairing of Billy Mackenzie and Lawson Bopping – third and fifth, respectively – will also be podium contenders, while Monster Energy Kawasaki’s Adam Monea heads to Hervey Bay with momentum of an overall top five at Appin behind him.

As it has been for much of the season, the challenge in the MX2 class will be to displace Serco Yamaha’s Luke Styke from the top of the podium. The team’s one-two position on the ladder was compromised with the loss of Luke Clout to injury, and a number of contenders have raised their hand to take up the fight.

Kale Makeham’s breakthrough moto win solidified him as a future star of the sport, and he’ll be charging hard to try to bridge the 83-point gap to Styke.

Kade Mosig’s comeback ride after his lengthy layoff due to injury had many talking, and the  Zero Seven Motorsports Kawasaki man is eager to maintain this form across the final decisive rounds.

Round seven will see the Pirelli MXD class battle resume also, with Hamish Harwood leading the way ahead of Jack Simpson and Jesse Dobson.

MotoOnline.com.au will compile an official pre-race Fan Guide ahead of every round in 2013. 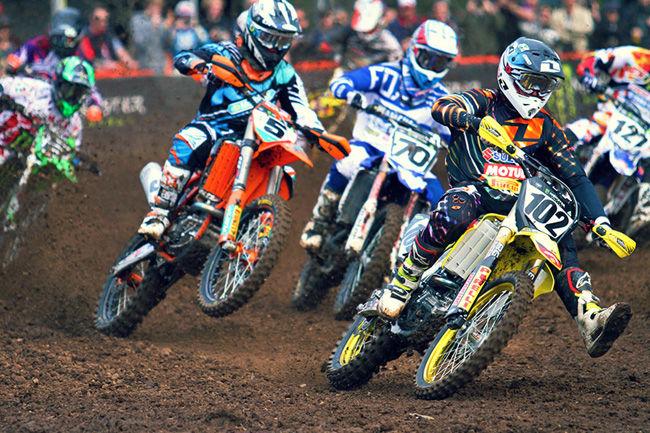 The MX1 class battle is set to be ferocious in Hervey Bay. Image: Simon Makker/Makkreative.com. Round six highlights and Race Reflection