When it comes to the American Motocross series there are different variables for the different tracks of the series that make or break them.

Each track at each of the different locales has its charm, it’s attractions and sometimes, downsides. RedBud is probably the national that most people would think of as being the ‘best’ one with best being a relative term as there are many ways to rank the 12 rounds of the Lucas Oil Pro Motocross Championships.

I’ve been doing this for a while now and Washougal, site of this past Saturday’s race, is what I would call a sleeper race of the series. Tucked away in the beautiful Pacific Northwest of America is a track that is lined with evergreens, goes in and out of the forest, has some hills and is all in all a perfect location for a Motocross track.

Although the track itself isn’t perfect, it’s hard and slick in spots and shadows play a role in the some sections in the back but hey, I’m not racing it right?

Washougal is a terrific race, the crowd is always strong and the riders and teams generally get a break from the oppressive heat in the previous rounds so that’s a good thing. It also doesn’t get that rough so riders are usually happy to head up there.

This year it was round eight of the 12 round series and as we watch Monster Energy Kawasaki’s Ryan Villopoto march to the title in the 450MX class the 250MX class just got tighter.

Here’s some news and notes from the race:
Red Bull KTM’s Ryan Dungey and Villopoto split moto wins with Villopoto taking the overall with his 2-1 score. It was, amazingly enough, RV’s first ever win at his hometown national. A cavalcade of errors from crashing to blowing up a bike to a red flag forcing a restart to a goggle lens popping out have all prevented Villopoto from winning in his career. But he finally made it happen and in an impressive manner as he caught and passed Dungey in the second moto for a convincing win.

For his part Dungey had won Washougal five years in a row on both 250 and 450 bikes and although he got beat by RV, he did win the first moto in a nice ride and he was miles ahead of third place. Still four rounds left and thanks to a terrible Redbud he’s got to make up these 40 points fast. 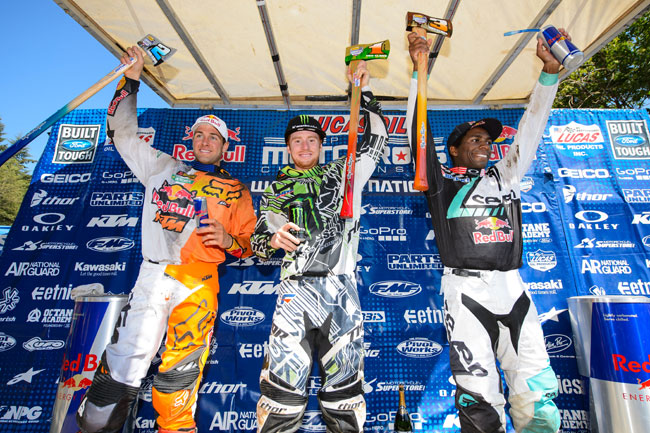 Yoshimura Suzuki’s James Stewart went 3-3 in a couple of good rides. Stewart stayed clear out of the trouble and although he had nothing for the two Ryan’s- who does?- he was much better than anyone else out there in the 450MX class. For Stewart and his season, a 3-3 is fine.

Villopoto’s teammate Jake Weimer had been under fire for some so-so finishes this outdoor season. Weimer’s the type of person that’s a hard worker but he does get down on himself when the results aren’t there. So this summer has been one big depression suite for Jake. At Washougal he rode a terrific second moto to score a season high 4th and the Moto Gods were with him as his 10-4 was good for 4th overall. Hopefully he can build on this going forward.

Washougal saw the return of BTOSports KTM’s Matt Georke (from injury) and privateer Weston Peick. Goerke DNF’d both motos with various issues and Peick, well Weston did what Weston does which is put it around the top 10 whenever he does show up at a race. Peick went 8-14 on the day a victim of a terrible start in the second moto.

The Honda Muscle Milk riders of Trey Canard and Justin Barcia had tough days, Barcia’s fourth in the first moto notwithstanding. Both riders were up there at different times but fell (and in Barcia’s case in the second moto fell again) and they could only muster a 10th overall (Barcia) and 12th (Canard). Tough day at the (pinewood) office for Honda.

JGR Yamaha’s Josh Grant was looking to keep his roll going from RedBud and with a fifth in the first moto it seemed that he was on his way. And in the second moto he ran second for a while before rapidly dropping back to 10th.

After the race Josh indicated that he had lost his rear brake out there and Washougal would not be a track that you would not want your brakes.

In the 250s, it was a pair of spectacular rides by GEICO Honda’s Eli Tomac in going 1-1 and pulling to within one point of Ken Roczen in the title standings. Roczen’s led the series the entire way and certainly rode well at Washougal (2-2) but he didn’t have anything for Tomac on this day.

But it wasn’t all peaches and ice cream for Tomac as on the last lap of moto two he just about bit the farm when he hit a kicker going uphill and almost endoed end over end. Tomac managed to save it but he admitted to me afterwards that he thought it was over. 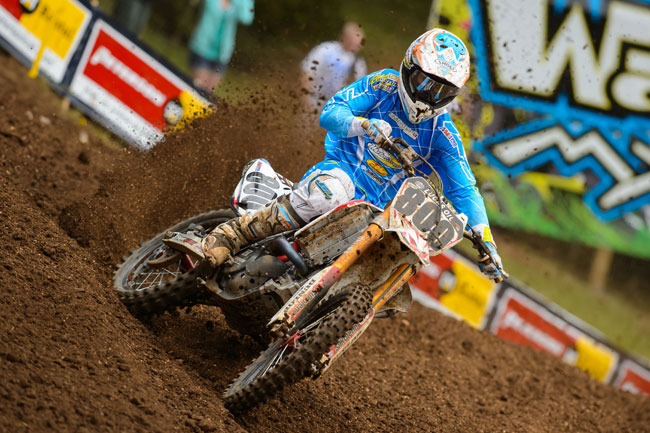 Tomac’s teammates Justin Bogle and Zach Osborne both had pretty good days that could also have been better. Bogle ran up front both motos and had his best finishes this year but late in both motos he went backwards for one reason or another.

Osborne still cannot figure out the first moto issues he’s been having but he’s got the second motos down. This week he scored a 3rd but it was offset but his 14th in the first moto.

A good day/bad day for the Monster Pro Circuit team. The much maligned and rumored-to-be-on-chopping-block Justin Hill scored a career best fifth overall on his home track. Adam Cianciarulo had one moto that was fantastic and showed everyone what his potential can be.

But the bad side is defending 250MX champion Blake Baggett had one motor blow up and a lackluster second moto all but sealed that Baggett will not be a two-time 250MX champion this year.

Of course we’ve all heard about Jeff Alessi, brother of Mike, shining a laser in the eyes of Ryan Villopoto before the start of the first moto. Yeah, I’m sure you’ve heard all about it at this point. Well MX Sports have issued their penalties and they’re harsh for sure.

At one point Mike Genova wasn’t going to race the rest of the series but thankfully cooler minds have prevailed and Mike Alessi will be on the line this weekend. Jeff Alessi and MotoConcepts have issued apologies and we’re all ready to put this behind us and go racing.

No matter what happens from here, Washougal is surely ready to go down as one of the more bizarre races this reporter has ever been to.