We love silly season talk here on MotoOnline.com.au every off-season, however this year it’s all come a little sooner than usual in what we’re referring to as the silly mid-season.

All the shuffling really started off back in April when title favourite Ben Townley suddenly retired, Daniel McCoy left a satellite seat on a full-spec CDR Yamaha just days out from the MX Nationals opener to replace him.

That seemed to be a decent, yet surprising, move by both McCoy and Honda considering they were to develop an all-new bike. From there, it all began to unravel. McCoy struggled to gel with the team and parted ways due to what’s believed to be financial restraints at the mid-season.

But of course before that, reigning MX2 champion and MX1 rookie Ford Dale was forced out with a knee injury during the Broadford round. To top Honda’s saga off, Josh Cachia was finally forced out of the year at Appin with his nagging wrist injury and McCoy’s replacement Gareth Swanepoel also suffered a wrist injury that ruled him out of moto two.

Now, Swanepoel is expected to return at Hervey Bay this weekend, while Honda has made a wise decision in bringing Jackson Richardson back from the US to fill Cachia’s shoes on the 250F for the final four MX Nationals rounds.

This is where things get complicated. McCoy was a potential candidate to return to Honda if Swanepoel couldn’t ride, as was experienced Victorian Cheyne Boyd. But Honda reportedly isn’t willing to pay and these guys aren’t willing to ride for free.

So when Tye Simmonds announced this week that he won’t be finishing the season, leaving a seat open at Craig Anderson’s Berry Sweet/Lucas Oil/Yamaha team, McCoy was instantly linked to the team and even tested the team’s YZ450F. 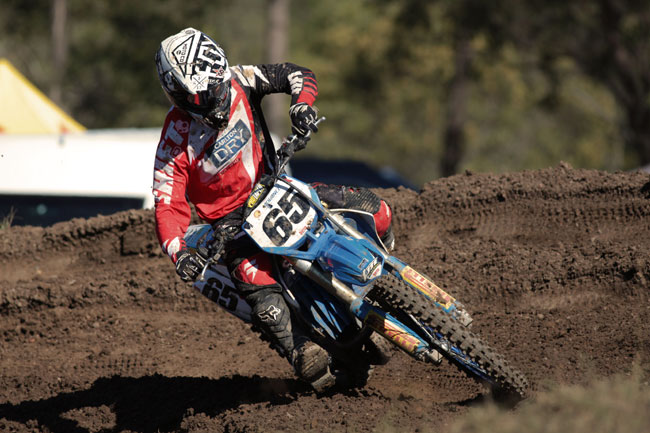 Dan McCoy was on a TM last weekend, but what will he appear on next? Image: Clearview Photography.

To throw a spanner in the works, McCoy then popped up in Queensland last week aboard a TM at Tivoli, but the team is referring to that as a one-off guest appearance.

Now, it’s almost certain that we will see Boyd, rather than McCoy, on Anderson’s team this weekend at Hervey Bay if you look closely at social networking sites, as he’s been in Newcastle this week testing with Ando and co.

So where’s that leave McCoy? A Supercross specialist who will be a title contender no doubt, he will very likely be on a factory team come Darwin’s SX opener and won’t contest the remainder of the outdoors. Could it be Honda? Will he make a shock return to CDR Yamaha (remember Billy Mackenzie is on an outdoor-only deal)? And even Motul Pirelli Suzuki only has Matt Moss confirmed at the moment. Cody Cooper would like to ride Supercross, but Jake Moss has been linked to that seat as well.

Or the hottest rumour right now has Todd Waters sitting out Supercross in order to race the Motocross of Nations. Of course, if that does go ahead, first in line for that seat would be McCoy – especially considering his vast experience aboard KTMs during his career.

Obviously Waters’ focus is to race in the world championship within the next year or two, so with the opening round of Supercross falling just two weeks before the MXoN in Germany, it would be ideal for him to keep up his Motocross training.

On top of that, the final GP of the season is a week following Coolum’s MX Nationals finale and a week prior to Darwin SX, so ideally Waters could head straight over for that final GP round and then represent Team Australia in Germany. It’s all speculation, but makes sense.

It’s all extremely interesting and confusing at the same time, but as soon as we know, you will know. Here’s Makker… 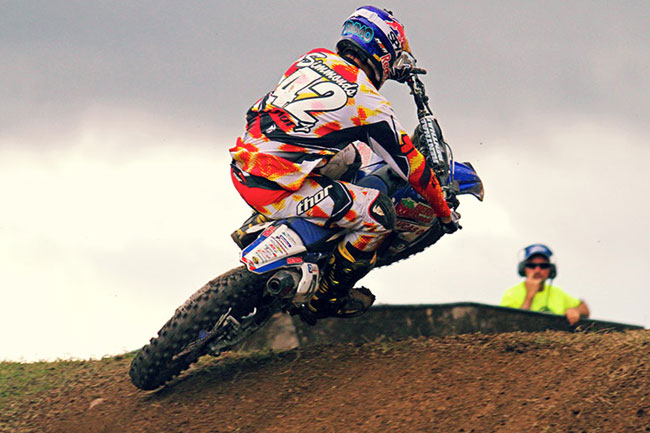 Wow, what a crazy, crazy week in racing. We’ve seen shock retirements, some quick recruitments to ailing team rosters, some big FMX shows cancelled at the 11th hour, and of course, that wild behemoth of ‘laser-gate’ in the US.

No doubt Steve Matthes will have a tonne of stuff to say on the whole Alessis vs the world debacle that unfolded at Washougal in his US Report column tomorrow, but let’s sum it up quickly.

Jeff Alessi allegedly shone a green laser into the eyes of both Malcolm Stewart and Ryan Villopoto on the start gate. Series promoter Davey Coombs found out and stripped Jeff of his credentials and the laser.

Matthes tweeted about it, Tony Alessi lost his marbles and both he and Jeff launched a very public verbal assault on Matthes and Coombs. Yesterday MX Sports (the series promoters) passed down some hefty fines on Mike Alessi and banned Tony and Jeff from any AMA sanctioned events indefinitely.

Things came to a head yesterday when Tony had a meltdown of epic proportions on Matthes’s PulpMX radio show. If you haven’t downloaded and heard it already, I suggest you do it pronto – it was bizarre, hilarious, sad and bemusing all at the same time.

Back closer to home, on Monday, Berry Sweet/Lucas Oil/Yamaha’s Tye Simmonds suddenly announced he was retiring, due to his head and heart not being in his racing any more.

I did a great interview with him that was published here yesterday (click here to view). In typical country-boy fashion, Tye was very frank about his departure and what brought it about. The good news is that this retirement might only be temporary – we might see him back for the 2014 Supercross championship if he rediscovers the motivation and enthusiasm for racing.

Simmonds’ departure suddenly saw a hole appear in the Craig Anderson’s Berry Sweet team and it’s rumoured that Victorian Cheyne Boyd will be flying the team’s colours at Hervey Bay. 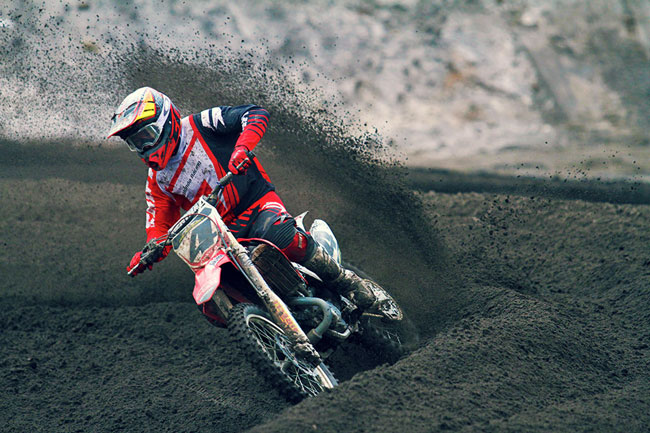 Cheyne Boyd could make a shock return to the MX Nationals aboard a Craig Anderson Yamaha. Image: Simon Makker/Makkreative.com.

Boydy was pretty frustrated after he missed out on a seat under the Carlton Dry Honda Racing awning when Josh Cachia opted out of the MX Nationals championship at Appin to address his long-standing wrist injury. Honda’s Lites ride was offered (and he accepted) to Queenslander Jackson Richardson, who happened to be back home after racing in the US this year.

While all that was going down, the promoters of the Best Of The Best Reunion Tour announced last night that they were pulling the plug on their FMX show due to miserable ticket sales.

While the concept of getting the OGs together for a last hurrah tour, who really wants to watch Mad Mike Jones do Dead Sailors, Clifford Adoptante and Tommy Clowers to bust half-extended seat-grabs and Carey Hart huck half-extended Hart Attacks?

Personally I think it’s a good thing the show was pulled before any of these guys could embarrass themselves and get booed out of the arena. It’s like watching Knight Rider – your memories are so much better than reality when you sit down to relive the good old days.

Oh, and Chad Reed has signed up to ride Moto X next weekend at the last Summer X Games to be held in Los Angeles. From next year X Games will move to Austin, Texas.

It sure has been a huge week in our sport. Let’s see what the next seven days hold in store…