MotoOnline.com.au reflects on the A4DE with CDR Yamaha's Outright winner.

CDR Yamaha’s Daniel Milner successfully defended his Australian Four-Day Enduro title both Outright and in E1 last week at Harvey in Western Australia, marking a historic result for him and the Victorian-based team in its A4DE debut.

Also currently on top of the Australian Off-Road Championship aboard his trusty YZ250F, Milner is the man of the moment in Australian Enduro and no doubt has a massive future ahead.

MotoOnline.com.au caught up with Milner today to speak about his back-to-back A4DE triumphs, working with CDR Yamaha and his current AORC form. 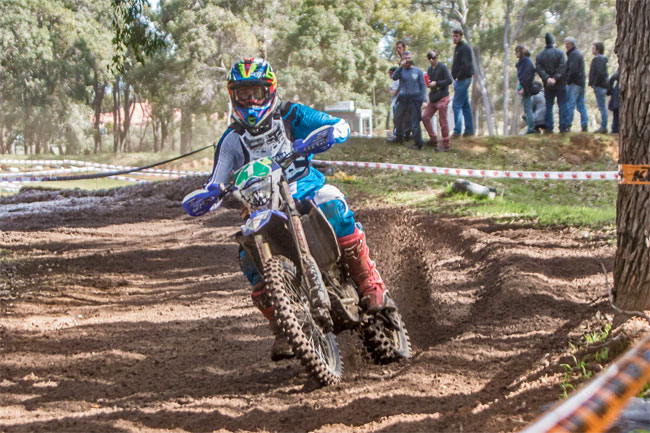 Daniel Milner on his way to the 2013 A4DE victory at Hervey in WA. Image: Four Oh Four.

Congratulations on defending the Four-Day crown… a great result for you and the CDR Yamaha team.

Yeah, cheers! It was a good result, especially for CDR being there first Four-Day, so it was nice to get them on the top step.

You obviously won last year, but this year you entered as defending champion and the event headed over to WA. Did your approach change at all?

Well, leading up to it I just did the same training as last year, that kind of thing. I went over there fairly early, started walking tests and in walking them it seemed kinda fast, so I thought it was going to be a bit harder on a 250F.

Once we got on the bike they were pretty good, so it was all good. I was nervous leading up to it, but once you’re on the bike it’s like you’re doing your own thing again – back on the bike and racing.

You’re in E1 so you’re on the YZ250F. It seems like since the A4DE last year especially you have been the class of the field consistently no matter what capacity you’re up against in Outright terms. Is that just a case of being comfortable on the 250F?

Yeah, I think we found the right set-up last year, so as soon as I’m on that particular bike it just feels comfortable to me. Especially in the tighter stuff it’s just so light and easy to throw around, so it works well for me. And this year, as you mentioned, CDR now runs the factory Yamaha off-road team. It must feel awesome to reward such an iconic Motocross team with the A4DE win on their debut.

That’s it, it was cool. They loved it! Going in I thought it would be cool to get that number one for them, but Dacky [Craig Dack] is always helping me with my style, my cornering, and anything else, he pulls me aside, helps me out and tells me what to do. It’s been a big help and it’s been working for me so far.

Same with my mechanic, he is one of the best and most hard working guys I’ve ever seen, so he loved it and is always enjoying being at the races. It was good to see the smile on his face and the entire team once we won it.

The CDR Yamaha team is recognised as one of the most professional in the country when it comes to bike racing. Have you noticed much of a change or any major differences since Craig and his team took over the off-road effort?

It’s definitely more professional, like you said. From testing and everything we do, they just seem to have everything working so well. They have the history and experience, even if they are new to off-road, everything seems to be working well and I’m enjoying it for sure.

And the AORC series, you’re leading Outright, so no doubt that would be a nice title to add to your collection this year.

For sure. At first in the opening rounds they were really rocky, so we struggled in them a bit, but we’ve done more testing since then, got the hang of it all and we’re sitting on top following a DNF from Chris Hollis. We’ll keep plugging away, take it race by race and hopefully I can get a victory for CDR Yamaha there as well.