The Australian Four-Day Enduro has etched itself in history as one of the greatest off-road events on the international calendar. With this year’s event freshly wrapped up in Western Australia, we thought it’d be a good idea to let the stars of the show explain the event in their own words! As you can see, every single one of the top 10 has their own tale to tell, which is part of the reason this meeting is the one they all want to win and log in the memory bank. Congratulations to all who competed in the 2013 running and we can’t wait for next year already.

Daniel Milner (CDR Yamaha) – 1st Outright, 1st E1
I’m so happy right now. It was a real battle for the whole event as there were a lot of top quality riders here and I had to be at my best the whole week to get the win. I put in a huge effort on day three to really get a bit of a break so it didn’t come down to a winner take all fight in the final Motocross test. I was able to win most of the tests and get a gap on the guys so I felt really good coming into today and I just had to use my head and not do anything stupid. To win this again and this time with a team as awesome as the CDR Yamaha crew is unreal. They have provided me with the best team and environment I have been involved with and my bike has just been amazing all week. I look forward to having a beer with all of them tonight.

Chris Hollis (Motorex KTM Off-Road Racing) – 2nd Outright, 1st E2
It’s a good feeling. I haven’t had a win for a while so I’m pumped with it. I’m pretty happy with how I rode too, I wasn’t on the pace of the lead two but I wasn’t that far off it and I rode really consistent. I’m also glad to win the championship for KTM in my second year. Today I got the holeshot and led for two laps and when Matthew came by I knew he had nearly 30 seconds to make up on me so I just cruised around til the chequered flag came out. I didn’t get to do the A4DE last year because I broke my collarbone at the six day, so this feels good to win. I had no crashes or major mistakes and the bike ran really well the whole event. All I did was changed tyres every day and that’s all, it ran spot on. 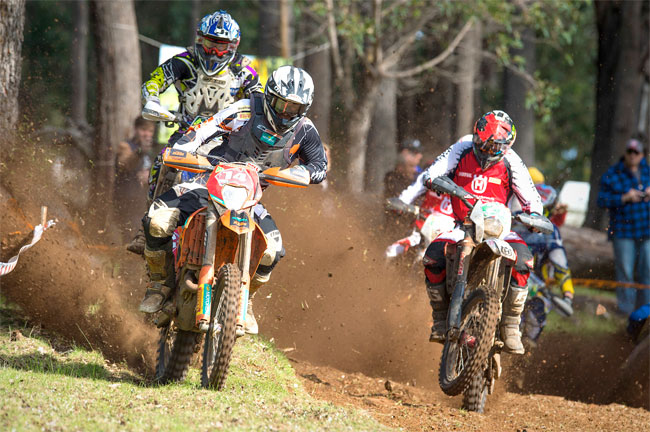 Chris Hollis (left) on his way to second Outright and first in the E2 category. Image: Jamie Nicolaou.

Matthew Phillips (Husqvarna Racing) – 3rd Outright, 2nd E2
It was a great week working with the PFG Husqvarna crew. My TE 310 R didn’t miss a beat and I was really happy with my set up. I felt fit and healthy and ready to attack on all four days. My team mates Lachy and Glenn were always there the whole time and are good guys to hang out with after the race. Well done to Lachlan, always improving. I would like to mention that is a great prospect for the Husqvarna family to have a mentor like Glenn Kearney in the team.

Josh Green (Active8 Yamaha Racing) – 4th Outright, 3rd E2
I’m pretty happy with how things went this week. There was nothing mind blowing but it was a really consistent ride all week and I was inside the top five pretty much from the start. It has been such a busy month for me and the team as we have been racing all over Australia. I’m exhausted now but content with how I have gone recently. The team have been amazing and AJ continues to give me exactly what I need to get things done.

Tom McCormack (Active8 Yamaha Racing) – 5th Outright, 2nd E1
I had a goal this year to finish top five in the A4DE and I’m stoked that I have been able to do it. I had a couple of ordinary special tests where I crashed and lost some time but I just kept focus, kept trying to ride my best and I was able to get back up near the front. My bike and the team have been awesome this week. Having AJ there to help and assist me as been unreal and this is a team result as we all put in the work together. Second in class behind the Outright winner is also a good result and we are both on the YZ250F. It’s winning motocross races and winning in off road and I love riding it.

Peter Boyle (Carlton Dry Honda Racing) – 6th Outright, 3rd E1
It was a great event. I was really happy with my results and how I rode. I had a crash on day three, which cost me some time but I definitely feel like I am getting back up to the same pace I had when I was racing full time. I have been juggling my racing commitments with work, which has made it hard to keep my training up to the level I would like but hopefully these results show what I am capable of.

Lachlan Stanford (Husqvarna Racing) – 7th Outright, 4th E2
Well the final day has been raced and done. I had a good final Moto, got fourth in my class and held good speed the whole time which put me up a few positions in the Outright. I ended up seventh Outright and fourth in class for the four days of racing. I had a fun A4DE and I am improving a lot every year. A massive thanks to the PFG Husqvarna Racing Team and all the associated sponsors, without them I wouldn’t be here. Now to get home and start training for the ISDE in Italy. 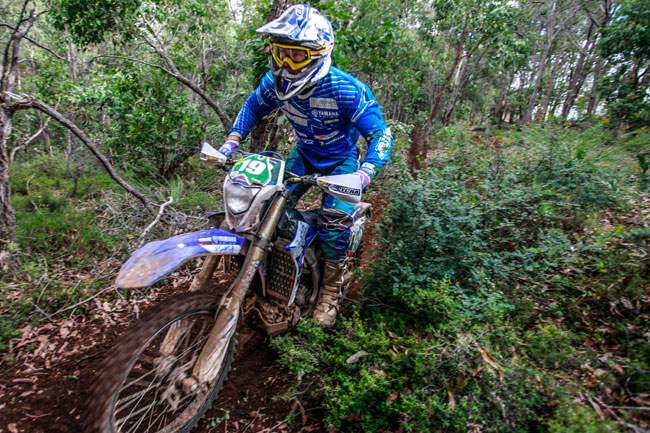 Stefan Merriman (CDR Yamaha) – 8th Outright, 4th E2
It was a fun event to be a part of with lots of different terrain and surfaces to ride on. I would like to have finished a little higher but I put in my best effort and I have to be content with that. The CDR Yamaha team have been a great addition to the off road racing scene in Australia and just their presence will lift the profile of off-road racing in Australia.

Ben Burrell (Motorex KTM Off-Road Racing) – 9th Outright, 4th E1
My first race in WA was great, it’s an awesome place with awesome terrain and the race was really well organised. I was surprised that a lot of stuff was like home, and the day we did in the pea gravel, I actually went pretty well. I got faster as I went and finished fourth in E1 even though I got terrible arm pump in the final moto today, which I hadn’t experienced at any other time in the event. Overall I think I came away having taken some more good positive steps. I’d have liked a podium but I’ll keep working towards that for next time.

Ben Grabham (Motorex KTM Off-Road Racing) – 10th Outright, 1st E3
I went straight from Port Hedland and I enjoyed the way it unfolded going from race to race, although with how fast the top boys were going it would have a been nice to have a little more time to prepare. Everything went pretty much as hoped for with the preparation that I had and it was good that I was able to pull a lead in the first two days and then go into a bit more of a conserve mode so as not to do anything silly. It’s now 10 months since my first race back from injury and it’s great to get back up there and win a class, my first Aussie title since the injury. Everyone on the KTM team rode pretty well I think, and to take two titles from three was great for KTM. Benny and I had a little outright battle going among ourselves the whole way through. He was higher in the end so he’s got one up on me.