As I wrote a few weeks ago, team Yoshimura Suzuki’s James Stewart has had a season that’s well below his usual standards. Stewart’s got one win on the year (Atlanta supercross) and more than ever before, James has had to get used to riders passing him like, well, any other rider in the field.

At one point Stewart had an incredible stat that he won every single race that he did not crash in. In fact, when Ryan Villopoto beat him at the Las Vegas SX in 2009, that was the very first time he did not win a race that he didn’t crash in. But then again he could be excused by playing it safe as he was in a championship battle with Chad Reed at that race.

May of 2009 – it wasn’t THAT long ago right? Well at this point, that stat is well beyond worth tallying up as Stewart’s lost more races in the last two years than he cares to count. Things are changing for Stewart as for the first time in his career, he’s had to deal with not being the best rider in the field. Being older and getting a new perspective on himself and his career has helped Stewart deal with this.

There was a time when James was very upset when he didn’t win – not winning by enough seconds was a reason to not be satisfied for Stewart and his camp. Earlier this year he replied to one of my questions with “Hey, I’m getting old!” which took me back. An admission by Stewart that perhaps he’s not the same guy he’s used to being.

A week ago or so I had Stewart on the Pulpmx Show and as usual he was a great interview – here’s a few questions and answers from that interview. 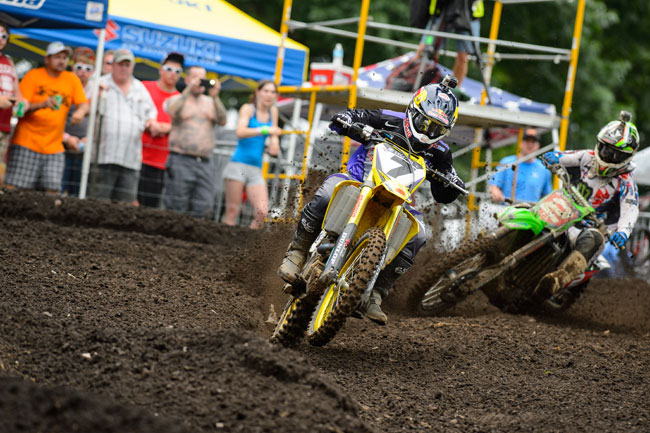 James Stewart has been improving his results of late outdoors. Image: Simon Cudby.

Do you feel like RedBud was your best race of the year so far? Results-wise it was, but riding-wise and all that, like putting it together?

Yeah. Actually like I said at the press conference the last three races have actually been pretty good for me. I didn’t have any issues this weekend. I would say from the start of the day I was off about three seconds a lap and then to kind of close that gap down. For sure second moto was the first time all year… I was actually trying to win that second moto.

Even after I got passed and stuff I had some good laps going. I felt good. For the first time all year I felt like I had a really strong chance of winning. One, because I was right there still, and two, as the day was going on I got better and better. So I was happy about that. First time outdoors I’ve been able to say that.

Even when I raced Ricky and when I raced Chad in ’09, right now Villopoto, he has everything going for him. Whatever it is, his program off the bike, on the bike… And I would say the biggest thing that I notice between now and back in the day is that bike setup and the way the tracks are, bike setups count now. And you have so many good guys.

I had the same thing with Ricky. If Ricky had his program going he had control of his motorcycle, I could still get second because the level of the field wasn’t as deep. Racing him, you got a guy right now who’s just clicking on all cylinders.

And the thing that happened with Dungey this weekend with the DNF, back in the day you could make those points up. But when a guy’s clicking on all cylinders, to make 34 points up or 50 points, whatever he lost, you need something to happen to him. And like I said, back in the day it used to not be that way.

How does it feel to have everyone come up and ask you questions about your brother Malcolm now? Because everyone usually asks Malcolm, “Hey, where’s your brother?”

It’s definitely different but I’ve been saying this for a while, I knew he was better on a 450, but it’s different. I kind of got used to it. Like I said in the press conference, he’s actually been beating me. For whatever reason, going down and all that, but he’s beat me like five out of six motos leading up into this weekend.

The funny part was after the race I went down there and I wanted to go watch the amateur races on Saturday night. And there was seriously this guy, we rolled down there at like 7:30 and they were down there practicing or whatever they were doing.

Malcolm Stewart has stepped up to the premier class this year and turned some heads. Image: Simon Cudby.

And he walks to the back and he tells Malcolm to roll down his window and he says, “you going to have to kick James’ ass.” And Malcolm goes, “yeah, I’m just trying to do my best.” And then he walks up to the front like he thought I couldn’t hear him. He goes, “dude, Malcolm just told me he wants to kick your ass.” So I hear it all the time. People come up to me and say, “Man, you can’t let Malcolm beat you. Malcolm’s kicking your behind.” All that stuff. So I’m getting used to it. It is what it is.

Mookie has been killing it.

Yeah, I’m happy. And the good part is with Malcolm when he got third at Budds Creek it’s not like he’s running around in 15th place and we’re battling for that. He was running fourth this weekend. So if he beats me he’s running 4th to 6th, 7th place. So it’s not like he’s in the back of the pack. I’m definitely happy for him. I think for him even at the house I’m helping him. He comes in between practice in the race. I’m helping him. I feel like he’s doing good and stuff and obviously I want to beat him but I’m just as happy for him doing great also.

Since Malcolm’s been home he’s definitely made me pick up the pace. Even with Blake also. Like I said, I’m helping him, but he’s actually helping me. The good part about him, when he’s on his game he’s a top five rider. At the house he rides like a top five guy, so it’s good for me.

If you could pick up the phone and call yourself ten years earlier and you had to give yourself some advice, what would you tell yourself?

I know what I would tell myself but if I tell everybody else it’s just going to start to dig a hole. Probably the easiest thing I would have told myself to enjoy when I went 24-0. I even said a couple times on the show, just enjoying the process of winning, losing, being around the fans… The things that I do now I think even people see me. And I still get frustrated at the races. I’m mad; I want to win.

But the one thing I have learned over the last few years is just to enjoy the process no matter what happens. And I think before if I won a race by 30 seconds I would come in the bus and be pissed off that I didn’t win it by 45 seconds. Now, I would have told myself just to enjoy the ride and enjoy the process of being a champion, a loser, being the fan favorite, people that hate you… just enjoy it. That’s probably the biggest thing.