Tunetech KTM Racing teenager Kale Makeham broke through for his first-ever MX2 race win at the sixth round of the Monster Energy MX Nationals at Appin, NSW on Sunday.

Makeham’s form has been a revelation this year as he leaps up to second overall in the MX2 points standings. MotoOnline.com.au caught up with the 19-year-old Victorian to find out if he’s returned from Cloud Nine yet. Kale, congratulations on your first MX2 moto win. Take us through that moto; how did you approach it, and what were you thinking when you found yourself up front?

Thanks! In the lead-up to Appin we’d done a lot of testing with different tyres, holeshot buttons and bike set-up and I was confident in the improvements we found.

I got a great start and slotted in behind Josh Cachia, then when he went down on the third lap I grabbed the lead. A similar thing happened at Wonthaggi and in that race I went balls-to-the-wall and I ran out of steam. I didn’t have the confidence to win then, but I learnt a lot from that experience and put it to good use at Appin.

On that last lap I still had a good gap over Styke, but I tried to stay focused right until the end; I’ve seen people throw it away in those situations and I didn’t want to do that. Crossing that finish-line was like a huge weight lifted off my shoulders. I knew if everything lined up I could get it done, but probably the best part was seeing how pumped my mechanic Steve Jones was and how much the win meant to him.

The Appin track looked pretty rough, but your throttle control with your two-stroke was a regular topic of conversation in the pits. How much of a handful was the two-stroke on that hardpack surface?

We’ve done a lot of hours testing with Tunetech, so I was pretty prepared for it. It was hard to find traction in the second moto when the track dried out, but I just focused on staying smooth, and not crashing or making silly errors.

I was a bit cautious after a training crash two weeks ago, where I went over the bars while practicing and landed hard on my back. The CT scans and x-rays came back clear, but I still have a big hematoma on my back and have been running this back support for pregnant women to keep everything in place. I guess riding with that injury in the back of my mind helped me keep it smooth and clean on the weekend.

If you were your mechanic at Appin, how would you rate and critique your performance over the entire day?

I managed to keep my flow, which was the best thing, I think. In practice my first lap was my fastest and I felt like I didn’t rush anything or get carried away throughout the day. I hit my lines and focused on keeping my momentum and staying mistake-free. It was tough with the lack of passing opportunities and when so many ruts developed, especially between the first and second motos. I just had to be patient, stalk the guy in front of me and let the opportunities come to me.

There were a couple of sections where I made some good moves all day, but I really had to work hard to make the passes stick in my last race. That roost was no good at all! 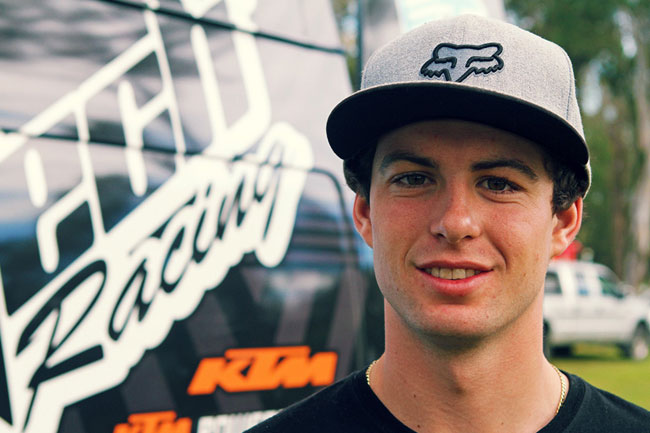 Makeham will continue to use 2013 as a learning year despite his impressive performances to date. Image: Simon Makker/Makkreative.com.

With Luke Clout and Josh Cachia now out of the championship, you’re suddenly second in the points chase, but a long way behind Luke Styke. Has this twist changed your focus at all? Do you think you’re going to ride more defensively over the next few rounds?

I’m not even going to think about it. I’ve got so much to learn and I’m focused more on learning this year than anything. I want to win races and if that means I grab overalls, that’s great, but I’m still treating 2013 as a learning experience in my rookie year. Next year we’ll set some goals for championships.

Great stuff. So let’s put you on the spot: what did you learn at Appin?

Now we’re heading from the hardest surface of the championship to arguably the sandiest at Hervey Bay next weekend. Which do you prefer?

I like both, but I definitely love sand-tracks. It’s more demanding and I probably have a bit of an advantage on a two-stroke in it. I’m really looking forward to Hervey Bay though; I won my first-ever national race – including juniors and everything – at Hervey Bay last year. It was my best finish of the year, so I’m keen to get back there. This week I’m staying with Jesse Dobson on the Sunshine Coast and getting as much training in before next Sunday. It’s definitely no holiday!

No worries, mate. Thanks.