It’s been a landmark year for enduro on a national level in 2013, with this week the peak of the mountain as the Australian Four-Day Enduro takes place in Harvey, Western Australia.

For Phillips, returning from Europe has put him in a great position to win the A4DE for Husqvarna, which would be a dream result for the Italian brand as it readies for drastic changes in 2014 and beyond under the ownership of KTM.

Phillips hasn’t quite wrapped up the EJ world title, but with a 29-point buffer heading into France’s season finale, we could be witnessing Australia’s next world champion competing over there in WA this week. 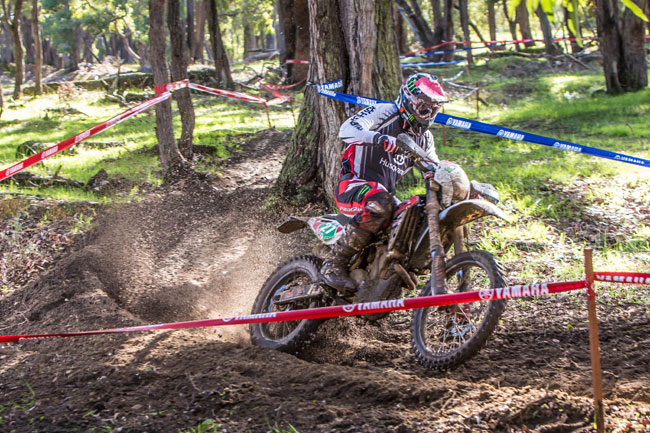 “Today was good,” Phillips reflected. “I rode fast where I could and played safe in the slippery corners. So far I’m leading outright and hope to hold the form for the rest of the week. The bike was really strong in the technical test.”

Last year’s A4DE champion is Daniel Milner and he too was strong on day one, in what is CDR Yamaha’s first attempt at the A4DE after taking over the factory Yamaha outfit from Ballard’s at the end of last year. Between he and former world champion Stefan Merriman, the CDR team will learn a lot this week.

And then there’s the Active8 Yamaha team of Hattah winner Josh Gtreen and Tom McCormack, as well as E3 contender Stefan Granquist on a satellite support deal.

“It was a good start by all our Yamaha riders and teams,” stated Yamaha’s Ray Howard. “All the riders seemed to enjoy the conditions and all commented on the performance of their Yamaha machines. The riders still have a long way to go with three days of racing but the riders are confident of building on the good start.” Daniel Milner is attempting to make it two title in a row this year.

One rider who will be watching with particular interest throughout the week is Motorex KTM’s Toby Price. Still recovering from neck surgery, the current AORC champion and former A4DE winner is getting increasingly anxious for a return back riding and to competition.

“It is great to be here, but also very difficult,” Price commented. “Seeing these guys having so much fun makes me want to go out there as well. Everything is going very well. I just need the confirmation from my doctors and my goal is to be back on my bike again soon. I can’t wait.”

Price’s regular teammates Chris Hollis and Ben Burrell are in the mix, plus Ben Grabham is doing a top job so far with the early lead in the E3 division. As you can see, the professionalism and quality of capably riders across the board is right up there with the best in the world this season.

We’ll have post-race updates every day this year, so keep an eye out for the latest on a daily basis right here on MotoOnline.com.au.