Following his most recent victory at Appin on Sunday, he now finds himself just four points shy of the MX1 championship lead behind Motorex KTM’s Todd Waters.

MotoOnline.com.au caught up with Moss today to talk about his performance last weekend, his mindset heading into the final four rounds and more. The number 102 Motul Pirelli Suzuki was on rails at Appin. Image: Simon Makker/Makkreative.com.

You were able to pick your second round win of the season on the weekend, congratulations on that. Tell us about your weekend – it must have been pretty good to start the season back up on that note.

Yeah, it was really good. Qualifying was good, I qualified first and obviously in the Super Pole I was hoping to get a win, but I was happy with second there and getting a couple of points was really good.

The first race went to plan, it felt really good, I holeshot and just felt comfortable the whole race. I really just rode my own race and wasn’t too worried about the people behind me. So that really went to plan.

In the second moto I got off to a really good start and just ran wide in the first corner. I was in third and [Kirk] Gibbs passed me and I really couldn’t find my groove. I had a crash and then Todd [Waters] passed me, so I passed him back and then I sort of found my groove and started putting down some solid laps.

I ended up fifth in that race, which was pretty good. I was a little disappointed, but overall it was good to be on top of the box. That’s where I need to be each and every weekend to try and claim this championship. I’m very happy with the team and looking forward to the next round.

It seems like whether it’s you or Cody Cooper, once you guys are out front you get into a rhythm and just ride away from the pack. So what’s the deal with that trend we’ve been seeing, especially on the weekend?

I just think our bikes are so good and being in the lead, knowing both of us are the fastest guys out there – qualifying first and second most rounds – that helps a lot knowing that you can definitely win if you’re out front.

I think that plays a big part, obviously being out front in the first race and knowing only Cooper was a little bit quicker than me, I knew I could win the race. Obviously the second race didn’t go to plan, but I think the second race for Cooper was the same deal.

He knows he’s a fast guy and as soon as he got out front he just rode his own race and left with it.

You spent much of the mid-season break over in America training and riding. Sometimes we know it’s not that easy to translate that over to the Australian tracks. I know you mentioned it was a little difficult to adapt to the tighter track…

The goal was to go to America and get fitter, get time on the bike, bum on the seat – that was our whole goal. Over in Australia there aren’t that many tracks to ride, so that was our whole purpose of going over there, not trying to get faster, but obviously I felt like we got a lot faster.

It was really hot over there, so doing a 30-minute moto in 40-degree weather, compared to doing it in the cold, it seems so easy [when you come home]. But having Dan [Reardon] over there and having my dad [Greg Moss] on the phone helping us out, it was really good. 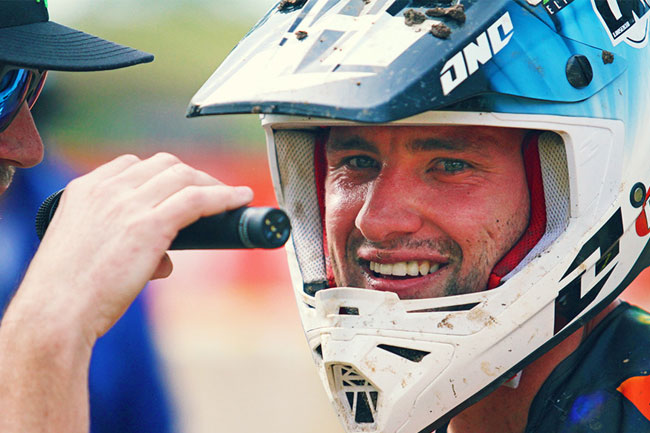 Matt Moss is happy with his progress in the points standings currently. Image: Simon Makker/Makkreative.com.

As far as the championship goes now, you’ve closed to within four points of Todd Waters in the championship. He did have quite a big lead there at first, but you’ve been chipping away getting stronger and stronger. You’re right there now and that must be really exciting for you.

It is, but I’ve got to keep my head positive and it’s not about winning every single race. As long as at the end of the last race I’m holding the championship red plate, that’s all that matters.

We’re going towards that and it’s a big feat – this class is stacked this year, so it’s not going to be easy. Todd’s a great competitor, Cody, [Billy] Mackenzie, [Lawson] Bopping, Jake [Moss] and [Jay] Marmont, there are so many riders that can win.

So I’m just looking forward to the next couple of rounds, getting some good starts and putting down some solid laps.

You’re a multiple-time champion on the Lites bike, so that experience of being in the championship hunt should really pay off for you in the last few rounds.

Yeah, well being in the 450 class I didn’t really know what to expect. It’s definitely a hard championship to lead or even be in that running to have a go at the championship at the end. The Lites is sort of easier, because it seems like everyone has such bad races and good races.

These top 450 guys always seem like they will sort of be there, so it’s a lot harder. But having the knowledge of winning a championship before I definitely can apply that and hopefully we can come away with it.

Well congratulations on that win and we can’t wait to see you continue at Hervey Bay.