Activ8 Yamaha Yamalube off-road racer Josh Green has been having a ripper of a season in 2013. After scoring a podium at his first-ever Finke Desert Race last month, Green blitzed the field at the 2013 Hattah Desert Race over the weekend.

MotoOnline.com.au caught up with the lad from Soldier’s Point, NSW as he prepares for next week’s Australian 4-Day Enduro, to find out what went down in the Victorian outback. Josh, this was your second year entering the Hattah Desert Race. What were your expectations entering the event?

Well I finished second behind Toby Price in 2012, so I was definitely aiming for the win. I enter every race with the intention of winning, but my goal this year is to get on the podium at every race. By doing that I get in front of the media and do the right thing by my fans, the team and my sponsors.

But yeah, the atmosphere at Hattah is awesome. The scrutineering on Friday night is a great time to meet kids and their families, sign posters and interact with the locals. There’s a lot of pressure and hype around qualifying on Saturday, and as for the race, man, I can’t even describe it. It’s the sickest 38 kilometre motocross track I’ve ever ridden.

I did eight laps in just over four hours, so that’s 320 kilometres just hanging off it around the roughest track you’ve ever seen. People don’t understand just how gnarly this race is; I was skimming these big sand whoops and jumping over guys who had crashed in between them. It’s just out of control.

Damn that sounds crazy! With Toby Price out of the running this year, who did you think was going to be your biggest competition?

It’s such an unknown thing. After Finke you’d have been be silly to think the Smith brothers wouldn’t be a threat, then you’ve got Chris Hollis who’s one of the fittest offroad riders, Ben Grabham is the desert king [laughs], you can never rule out Jarrod Bewley, and then there was a bit of hype around Ben Townley and Peter Boyle. I had no idea who was going to be my biggest rival, so I just tried to ride my own race and not worry about it.

Take us through the race. From what we’ve heard you pulled out a pretty massive lead over the rest of the field.

The track wasn’t bunted or marked very well, but I got to the front and tried to be smooth and settle into a pace, but there was a freight-train of riders behind me. I’d miss a rut and the next thing I’d know there was a front wheel being thrown up inside me. I ended up overshooting a corner and let two guys past, but passed one back before I got back to the pits. I fuelled up on the first lap then ran a two-lap pit strategy from there, and came out of that first fuel-stop in third place.

After 400 bikes had gone around the track it was a lot easier to see the track and I picked off both the guys in front of me halfway through the lap then pulled a gap out.From there I settled into a rhythm and found a pace I could keep for four hours without pushing 100 percent. 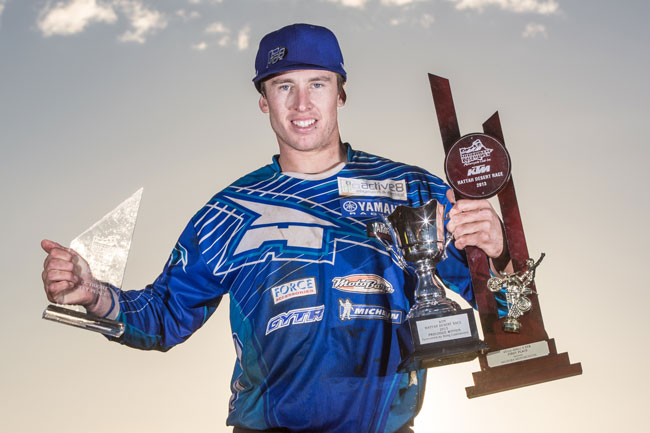 I heard you had a bit of a crash on the last lap. What happened?

Yeah that was scary, mate. I came over a dune and there was a lapper stopped in the middle of the track. I was mid-air before I saw him and thought ‘it’s over. This is gonna hurt’. I landed straight into the back of him and sent him flying and I went down. I thought I was on the ground forever. My bike was bent up and twisted and the crash scared me a bit. Once I got back on the bike I still had the lead and kept pushing to the end. It was one of those crashes that could’ve easily been a lot worse.

Well you’ve only got a week or so before the Harvey Fresh Australian Four-Day next week in WA. What are your aims there?

It’s been so busy. I’ve done next to no off-bike training at all because the races have been coming so thick and fast and we’ve been testing as well. I’ve been home 10 days in the past four months.

But I have no idea what to expect from the four-day. I’m hoping for a podium and to have a good, clean race, but I’ve never raced in WA before. I’ve heard from a few people the tests will be sandy, and a couple of WA guys came to the A4DE last year and couldn’t believe how many trees we had. I’m hoping those two aspects marry up and it’s sandy and open – that’ll suit my riding style.

Awesome. Thanks for that, mate. Congrats again, and good luck for the Four-Day!