International Entertainment Group (IEG), promoters of the Australian Supercross Championship, have announced that the 2013 series will receive 12 hours of free to air coverage on SPEED WEEK, SBS. 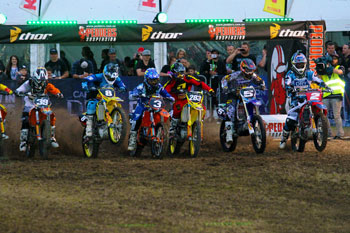 International Entertainment Group (IEG), promoters of the Australian Supercross Championship, have announced that the 2013 series will receive 12 hours of free to air coverage on SPEED WEEK, SBS.

The free-to-air broadcast coverage this year is another step forward for the championship and will to bring mainstream attention to the sport, teams and riders.

In addition to the 12 hours of coverage on SPEED WEEK, SBS the Australian Supercross Championship will be aired in New Zealand, United Kingdom, Europe and Southeast Asia.

According to IEG Managing director Yarrive Konsky, this announcement for the Australian Supercross Championship confirms the most extensive television broadcast package for national motorcycle racing in Australia

“I have been working with Greg Sita from AVE on this for several months and the entire package is amazing for Australian motorcycle racing,” Konsky said.

“Teams, riders and sponsors will be excited to know that the championship will have a new look, and Pro Open and Pro Lite races will be shown in their entirety, in separate one-hour programs.”

Konsky believes a comprehensive television package is vital for the growth of Supercross and must be able to reach mainstream audiences in order to bring in outside sponsors.

“Without television it is hard to sell the sport to out of industry sponsors,” he added. “It’s all about impressions and ensuring brands reach mainstream audiences. With AVE we have been able to build a package that will have an international reach.”

“I have always enjoyed motorsport and Supercross is as action packed as it comes,” Sita said. “We will introduce many new aspects to the broadcast and provide a professional program for everyone to be proud of.”

The opening round of the Australian Supercross Championship will be held at Darwin’s Hidden Valley Raceway on 12-15 September.