Brett Metcalfe should be bitter. No doubt about it, the system that is American motocross has failed him. It’s not supposed to work like this for the veteran Aussie rider. Brett’s been working his way through the ranks over here and while he never captured a win on a 250 machine, he had a ton of podiums both indoors and out.

Brett signed a factory Suzuki contract to be full-time 450’s and had a good first season, one that saw him capture the Southwick 450MX national. Metty’s always been very fast in the sand and it was the pinnacle of his career along with riding for Australia all those times in the Motocross des Nations.

Metcalfe’s second year on the Suzuki started off well also, in the mix for a top five supercross placing, he had a rough last few races and ended up seventh. Still, for a rider that’s always been faster outdoors, a top ten in supercross points is nothing to sneeze at. And outdoors he was his usual fast self. And then it happened.

Metcalfe’s career (and in some respects, his life) changed out at Glen Helen while practicing for an upcoming national. At that point Metcalfe had been solid as they come holding down top five in the points and of course, Southwick was coming up. Somewhere near the end of the practice session Brett ran out of gas and crashed heavily off a jump. It was a disaster of epic proportions.

Metcalfe suffered wrist and leg injuries that immediately took him out for the rest of the summer. And it was a crash that could have been prevented as someone at Suzuki didn’t put the fuel tank on that was capable of going the 30 minutes plus 2 laps that Brett was going.

As a former mechanic, I’ve been there and mistakes happen. It’s entirely regrettable and entirely preventable but in the end, sometimes crap happens. What happened next was definitely not something that was the norm. Suzuki dropped Brett without so much as any second thought. This was a rider that gave them two solid years of results, a model rider on and off the track and he got seriously hurt due to the negligence of a Suzuki employee and this is how you repay him?

It’s not without precedence no but there are also plenty of teams that promise a rider another year of a contract if it’s something mechanical causing injury. It’s not a guarantee but it is a courtesy that’s been extended in the past. But not for Brett and just like that, he was on the outside looking in with serious injuries and a need for a contract.

Such poor timing combined with a pullback by many race teams left Metcalfe without a ride in the USA that would pay him a salary. That’s right, a national winning rider was unable to get any sort of guarantees just 18 months after theoretically being the very best rider in the world on a given Saturday. Yes folks, the professional dirt bike racer world isn’t always hookers and blow for these guys.

Metcalfe took supercross off to heal a little better and spend some time with his wife and newborn son so it wasn’t much of a strain on him to not go indoors, after all, with the injuries, his lack of prep time and supercross itself being so gnarly, Brett bided his time to wait for the American outdoors. And guess what? Same thing, Metcalfe couldn’t find anyone willing to pay him anything to go racing. It’s a cruel world we live in no doubt.

Eventually a Motul Pirelli Suzuki ride down under or a Leading Edge Kawasaki Canada teams were the choices. Sure there would be someone willing to put Brett on a “B” or “C” bike in America but then what? His results would suffer, people would write him off and he might be in a worse place than he was now. No, Brett is taking the route back to the USA through the north and a ride with the Canadian Kawasaki team was his choice. 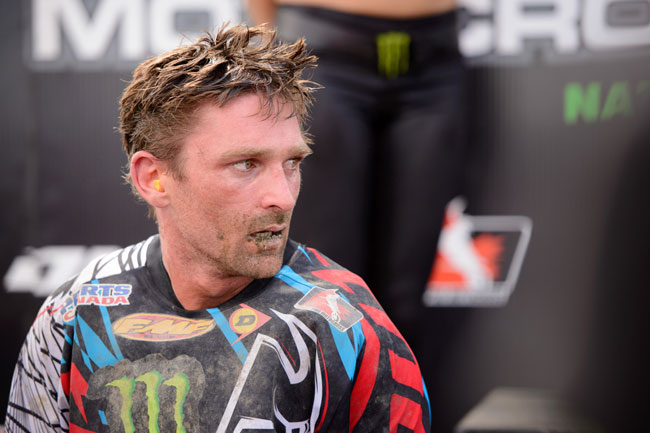 Metcalfe is working his way back to a full-time US ride. Image: James Lissimore.

I visited Metcalfe this past weekend at round three of the CMRC nationals and he’s the same old guy. You’d not notice any bitterness by Metcalfe or any sort of airs that he was “better” than where he was. Which was a field inside the city of Calgary, Alberta Canada. He’s a world-class rider with perhaps three, four riders that have any chance of being on his level. After that, it’s riders that have jobs to go to on Monday. This is where it all resets for Brett, this is where the rebuild begins.

“Yeah I was a little bitter but I never got down,” said Brett after the race, one where he went 1-1 for his third and fourth straight moto win and a nice points lead with six rounds left. “I tried to stay positive through it all and the biggest thing was my baby boy Nash being born. I can’t imagine not being there and being able to spend this time with him. I can’t complain.”

Metcalfe’s one of the nicest guys in the pits and one would expect this attitude out of him. He’s easy to deal with for a team, for the media and for other riders on the track. He’s been the same guy since I first met him which was in the fall of 2001 at some supercross in Germany when I noticed this crazy kid on a KTM125 wearing the number 123 and pinning it.

Metcalfe’s going to race the Southwick national here in the USA in a couple of weeks and probably the last race to let everyone know that Brett Metcalfe is the same rider he always has been. The idea behind the two nationals, behind going to Canada, behind all of this is to get back to where he used to be – and that’s one of the very best racers in America.

“I can’t complain with this deal, everything’s been great and I’m happy to be here,” said a still covered in dirt Metcalfe. “I like my life right now but I’m very, very, very determined to get back to where I was and even be better.”

Brett Metcalfe 2.0 is still under construction but don’t worry America, you’ll see soon enough that American motocross slept on Brett Metcalfe. And I have no doubt he’s going to make it all the way back. He’s got no choice.