Todd Smith recently added his name to an exclusive list of winners in the most famous off-road event in Australia, the Tatts Finke Desert Race.

The GHR Honda rider put on a strong performance throughout the event, taking second in prologue behind his brother Jacob before going on the clinch the victory.

MotoOnline.com.au caught up with the 28-year-old to talk about taking his maiden Finke win, how it felt to stand beside his brother on the podium and more. 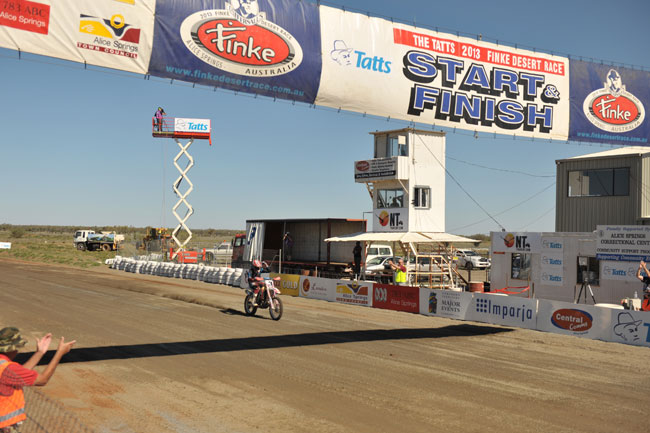 Congratulations on your first-ever Fink Desert Race win, it must feel great to cross the line first in such a famous Australian race?

Yeah thanks mate, it was great, it’s something that’s hard to explain. I didn’t really know what it would feel like or how it should feel. It was just sort of really weird to start with, it’s something that you think is unobtainable and it was sort of my ultimate goal racing in Australia. To finally get it and to happen the way it did with Jake in second was pretty amazing.

Heading into the event, how did you feel. Following your strong prologue performance did you feel you had the win in you?

I felt very comfortable and I knew that I would be fast enough. Our Honda’s were running great this time and handling well, I could ride it flat out without it tiring me out too much, which is a big thing up there. There’s a fine line between getting the bike right, and the bike being really bad.

We worked really hard this time on it and we only really had five days to test the bike before the race. So we had to work pretty hard in those five days. The work we put in there, paid of for the race. We went in with a bit of confidence, I was a little bit worried about Ben [Grabham], he qualified back a little bit and I was sort of thinking that he might be coming through and Dave Walsh was definitely going to be a contender before he took himself out.

I wasn’t feeling too bad, but I was really worried about Jake too. When we were out pre-running he was riding really fast and I was having trouble keeping up with him so in race mode he’d be fast. Smith’s GHR Honda was on-point for 2013, allowing him to tackle to gruelling terrain at speed.

You mentioned that your bike was dialed in this year, how important to you think it is to have a team such as GHR Honda behind you in this event?

It’s very important. The infrastructure too, not just the bike. You’ve got to have the fuel stops set up, Desert Edge did out fuel stops and they did a tremendous job with those. And just with the bike you’ve got to have it running right, handling right and everything just has to be a whole package.

As you said, having your brother Jacob by your side during the event was very helpful. So how did it feel to stand on the podium at the end of the day with him right there next to you in second place?

It was a pretty amazing feeling, we joked about it when we cycled around the prologue track a couple of days before it. I said ‘what’s the chances we’ll probably be racing up this finish line for the win?’. He said ‘nah it couldn’t happen’.

I was saying, ‘well it probably will happen you know’. Then after prologue it sort of set the stage because the last few years the race has been won from the front row of the prologue. So I was thinking we had a fair old chance after that.

Finally, you recently finished second to Jacob at the Condobolin 750, does it feel good to get one up on him in the Finke and could it even heat up the rivalry between brothers?

There’s no real rivalry, we sort of do keep a little bit of a tally, but it’s whoever is best on the day and makes the least amount of mistakes. Jacob on his day, nobody could beat him. So I was just lucky that I got in front of him.

It definitely does keep the fire going between us, he motivates me to train and ride, and I’m sure it’s the same for him. So it definitely helps.