With a weekend off on his regular Monster Energy MX Nationals MXD schedule, Jay Wilson was offered a wild card entry into the MX2 class at Conondale’s round five.

Rocking his retro-themed 30th anniversary, number 51 GYTR Yamaha, Wilson took to the Queensland circuit and put together a strong 5-7 moto scorecard for fourth overall on debut in the MX2 class.

MotoOnline.com.au caught up with the 18-year-old today to chat about his Conondale performance, his thoughts on the MXD and MX2 classes and his plans for the second half of the series. You took the wild card entry into the MX2 class for Conondale and obviously went very well with a fourth overall, how does it feel to get such a strong result on debut?

It was great, I’m pretty pumped with it. I was there to go have fun, it was the 30th anniversary for Yamaha so we had the whole retro look going and it was just a fun weekend.

I had no pressure on me, I just went there to do what I could do. I got some good starts, better than what they have been all season. I’ve been working pretty hard with AlterEgoElite, myself and Luke Clout have just been practicing starts all year.

I finally feel like I’m starting to get somewhere with my starts now and it was all good, I really enjoyed it and had fun.

What were your initial expectations heading into the event. You said you went in there to have fun, so do you think that low-pressure, one off race mentality may have helped with your performance?

Yeah I’d say that probably helped a little bit too, but that’s just a thing I’ve been trying to do, that’s what I’m trying to do in this second half of the season – just go have fun and ride my motorbike.

I’ve probably put a lot of pressure on myself and it probably hasn’t helped me out a lot. So for this second half of the season I’m just going out to have fun now and to show what I can do.

You’re obviously preparing to move into the MX2 class next season, do you think this is a sign of things to come from Jay Wilson in 2014 after already getting your feet wet in that class?

Yeah, definitely. I wouldn’t say MXD is a bad class, but it’s just a lot of rookies come into that class and all they want to do is win. They’ve got plenty of speed, but they can’t hold that speed and they don’t know how to deal with it under pressure.

I haven’t done a lot of 30-minute motos this year, so that was a little bit different. But I think with some time to get ready for MX2, I should be looking good for the following year and hopefully we can work something out. 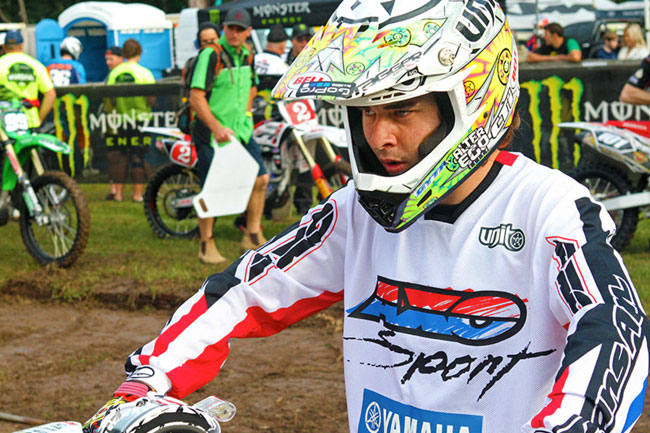 Wilson means business when it’s time to hit the track and he proved he has what it takes to tackle the MX2 class in 2014. Image: Simon Makker/Makkreative.com.

You mentioned the MX2 riders being a smarter bunch on the track, so overall what did you find to be biggest difference between the two classes for you?

In MX2, those guys know how to sprint for the first three laps. Those guys can put a fast lap time down. In MXD they can also do it, but it’s out of control sprints. So that’s the biggest thing with MXD and MX2, I’ve been struggling with those MXD riders.

They sprint, but only so many of them can sprint at that speed without crashing. In MX2 those guys can sprint, settle in and run a 30-minute moto. That’s something I’ll work on, just my springs and things like that.

I’ve never been a really good qualifier, but that’s something I’m going to work on and I’m looking forward to the longer motos next year doing the 30s, that’s where I really improved – the last 10-minutes of motos, that’s probably my biggest strength.

Finally, you’re obviously have a rough MXD series sitting seventh overall currently. Heading into the mid-season break with a solid MX2 result under your belt, do you think this is the best situation possible for you to return at Appin and make a run at this title?

Yeah, definitely. I’ve had the speed there all year, but I’ve just been getting caught up. Bad starts have been a big issue, but by the looks of it now we’ve got it all working and hopefully we can get some good starts and get out front.

This second half of the season I’m really just focusing on getting good starts, having fun and showing everyone what I can actually do. We’re going into Appin where I won last year, so it should be a good event.

In MXD these guys crash, they do whatever they can do. They put crazy sprint laps in and they crash. They’re rookies too, so there is going to be mistakes happening.

I’m definitely not doubting that we can’t win the championship from here. We’ll just keep taking it race by race and hopefully by the end of the season we can get back up front.