Motul Pirelli Suzuki racer Matt Moss has become the first racer to break Motorex KTM’s Todd Waters’ string of overall victories in the MX1 class as he stormed to a near-perfect weekend around a technical, one-lined Broadford circuit on Sunday.

It’s been a long time since Moss stood on top of the podium in the outdoors, so we pounced on him soon after he sprayed the champagne to find out what this new-found surge in momentum and confidence means for his title chances. Mossy, congratulations on an outstanding performance at Broadford. You came close to having a perfect day on a track that most people seemed to struggle on.

Yeah, the track was really muddy during practice and qualifying from being over-watered, so [Suzuki team manager] Jay Foreman told me to pull off and wait until the end of the session to put in a hot lap. A few lines had started to develop by the time I got out there and put down a qualifying time that was two seconds quicker than everyone else.

Then in Super Pole I ended up being three seconds a lap quicker than everyone else again – my confidence was sky-high and I had so much confidence in the bike set-up.

I didn’t get a very good start in the first moto, but I watched everyone fall off in front of me and I caught Todd, then crashed before I could get past him. Luckily my bike didn’t stall, so I quickly chased him down again and got by him for the lead and win.

In the second race I’ve never felt so good – it was one of those effortless motos where everything seemed to click. Billy was too far out for me to try and mow down, as I didn’t want to crash and give away my overall for the day.

Feel free to correct me if I’m wrong, but is this your first-ever MX1 overall win?

No, my first was back in Toowoomba in 2007, I think? Since then I’ve come pretty close a fair few times but I haven’t been able to repeat that until today. It’s been a long time and it feels good to be back. I knew I’d get there eventually, but I didn’t think it would be this hard!

Now I feel like I’ve earned this and deserve to be here. I’m happy to get the number one plate today but I’ll be happier when I get the red one. We’re just going to have to keep beating the rest of the guys and it’ll come our way.

You seem to have gained a lot of momentum at Super Pole, winning two in a row now. Is this an aspect you’re focusing on?

Oh, definitely. After I missed out on Super Pole at the first round at Raymond Terrace I thought ‘I’ve got to be in there if I want to win the championship’. I won Super Pole at Wonthaggi and again today, so I’m tied with Todd on qualifying points now.

We’ve effectively negated his advantage that he had early on in qualifying and now he’s only ahead of us due to race points. That Super Pole is really important. Even this weekend if my brother, Jake, had made Super Pole he would’ve finished third instead of fourth.

Obviously Todd is the man to beat right now and has a big target on his back. When you line up for races are you deliberately going out there to beat him or just go the best you can?

I don’t think about Todd one bit. You know, I love to beat him, but he’s just another person in the paddock. He started off strong, but there are plenty of others out there who can set a race-winning pace, just like Billy [Mackenzie] did in the second moto. There are a lot of others who can beat him and I just get out there and do my own thing. 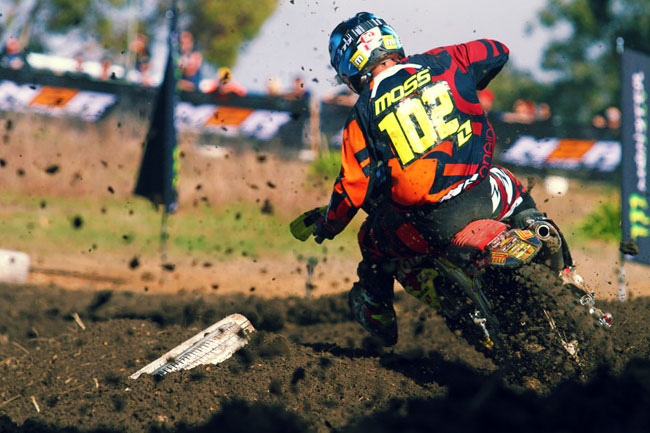 Moss took the overall with Super Pole and a 1-2 scorecard in the motos. Image: Simon Makker/Makkreative.com.

Todd crashed last weekend and turned up to Broadford 50-50 as to whether he’d even ride. Did that make you approach Broadford differently? Did you think this would be time to step up and capitalise on that situation?

That’s a tough question to answer – did it affect him today? I don’t know. It’s the first race he’s lost but I think all of us have been starting to chase him down a little bit. It’s one of those things, everyone has their bad luck and I hope no-one uses that as an excuse or his team don’t say ‘well, he was beat-up anyway’.

I’ve hit my head a few times and a week later it didn’t really affect me. Todd is a true champion and I hope he bounces back as I want to have some more battles with him.

Good stuff. We’re off to Conondale in a couple weeks to mark the halfway point of the 2013 season. How do you rate Conondale and your chances there?

I really like Conondale, it’s got a great atmosphere and I like the old-school grass track event. It’s definitely a unique event. Conondale is where I had my Pro Lites debut with CDR Yamaha bike and I was out in front by 40 seconds before my bike blew up with one lap to go. I feel like I can go fast there and am looking forward to it.

Excellent. Thanks for the chat, bro. Catch you in a couple weeks!

Thanks, mate, see you there.