MotoOnline.com.au's Simon Makker checks in with Josh Cachia after Wonthaggi's round three of the MXN series.

Considering what he’s faced so far, Josh Cachia has had a pretty damn good season. After his JDR KTM team folded, Cachia made an 11th-hour switch to Carlton Dry Honda Racing team.

He has come to grips with the new machine and team, fought through broken hands and a pinched nerve, smoked everyone in the second MX2 race at Wonthaggi and is still within striking distance of the front-running Serco Yamaha racers.

MotoOnline.com.au caught up with always colourful Cachia after an eventful Wonthaggi outing to find out what’s up. Josh Cachia made a statement at Wonthaggi with his impressive moto two domination. Image: Simon Makker/Makkreative.com.

Josh, from the outside it looks like 2013 has been a mixed bag for you so far. What are your thoughts on how it’s panning out?

Well it started well with good preparation and I had some good results with JDR KTM in the States. I did everything possible, but picked up a couple injuries and the KTM team folded.

I changed to Yarrive Konsky’s Honda team and while it’s been exciting, I’ve lost six years worth of knowledge and had to get used to a new bike, new team dynamics, and finding out who I can trust and who I want around me.

Ben Townley is a legend and has been helping me out a lot and Ford [Dale] has been helping me with lines. We’ve got a solid team but it takes time for all the jigsaw puzzle pieces to line up and click into place. As of last weekend at Wonthaggi I think it’s starting to click.

Great to hear, mate! Now, you were one of the blokes that got caught up in the first-turn pile-up in moto one at Wonthaggi. What happened exactly?

It’s just one of those things that happens once in a while and it’s the first time in ages I’ve gone down in the first turn; I guess I was just paying my dues to the dirt.

I had two guys in front of me and I tried to sneak up the inside of them, but went into a two-wheel slide and ended up going down and causing a pile-up. I felt bad, especially as one of the guys I took down was my buddy Kade Mosig.

I saw him under my bike and I hate seeing mates twisted up like that, so I dragged him out and made sure I put his head in a neutral position with his body and only took off once I was happy with his position. I probably took an extra 30 seconds to do that and only missed the podium overall by one point, but the health of mates is more important than a podium.

The clutch perch had been smashed off my bike and my boot was undone, but I just put my head down and climbed back up to ninth with no clutch.

Both for the remainder of that race, and then your dominant performance in moto two where you lead from start to finish, it seemed like you were on a serious mission to prove to everyone you’re still a major title threat this year. Is that fair to say?

Bloody oath. I knew it was only a matter of time before shit kicks off and I could feel everything coming together for me. When that happens it’s all on. I carry the same mindset into every race I enter: destroy everyone every single time, ride my bike as fast as I possibly can and don’t complicate things.

The bike wasn’t set up quite right at the first two rounds, but coming into Wonthaggi we made a couple of changes and I finally felt at one with the bike.

I got into that headspace where I can pump out lap after lap and destroy whoever’s in second place. When I get that feeling no-one can beat me. It’s like the switch has flicked now, and with the injuries starting to heal I think we’re only going to get faster. 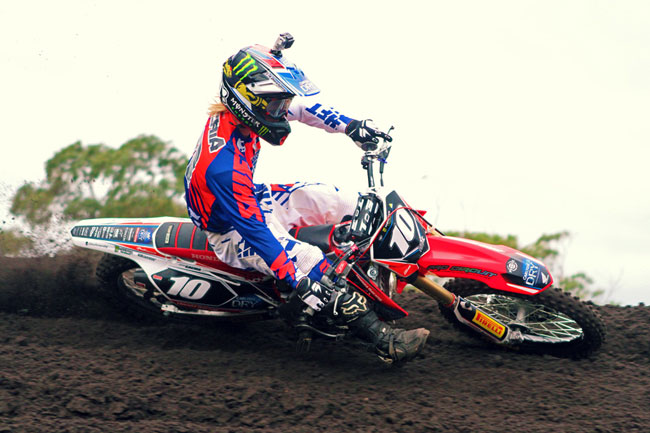 Cachia is currently nursing some nagging injuries and plans to have them fixed during the mid-season break. Image: Simon Makker/Makkreative.com

You’re trying the shake a couple of hand injuries at the moment. What’s the deal with them and how did they happen?

I broke the scaphoid a long time ago and I’ve toughed it out for a couple of years, but over the past three years it seems I’ve been breaking my hands regularly. At the moment I’ve got a broken scaphoid, a broken thumb and a pinched nerve.

I’m riding with injuries that would make most guys sit on the sidelines for six weeks and have a sook. It hasn’t stopped me and I’ll keep charging, but I’m starting to get over it for sure.

At both Raymond Terrace and Murray Bridge I didn’t have any feeling in my throttle hand and couldn’t feel the bike’s response. It felt like I was holding onto a coke can! The bones are starting to heal and get sticky now. At Murray Bridge I could feel them shifting, but they aren’t moving now.

Both Luke Styke and Luke Clout have been pretty dominant so far this year. Has their speed surprised you?

Not really. I don’t give anyone the satisfaction of knowing what I think about them. I don’t put anyone on pedestals. I don’t even want to know their names and I don’t care about them. I hate everyone in my class – they’re not my friends and to me they’re nothing but other riders who I need to beat.

In just over three weeks we’ll already be facing the mid-season break in the championship. What are you plans over the five-week period?

I have to do what’s best for my body and I’ll be undergoing two operations on my hands to get my scaphoid fixed. Mine has practically disintegrated and it’s in the best interest of my racing career to get my hands fixed for the future. I have to put racing aside for a few weeks, then come out firing again at Hervey Bay with nothing getting in my way.

Great stuff, thanks for the chat, champion. Catch up with you at Broadford.