With the events of the 250SX class last Saturday night, we are set up for a great night of racing in Las Vegas this Saturday night. The 450SX title? Yeah, that’s all done with Monster Energy Kawasaki’s Ryan Villopoto’s great ride and series-clinching win. But the 250’s, they’re just nutty.

With Red Bull KTM’s Ken Roczen shockingly not qualifying for the main, it was thought that GEICO Honda’s Eli Tomac was going to step right in there and perhaps reclaim the lead in the points or at least really whittle down the 20-point gap.
And he sort of did. But it could’ve been oh so much better.

Tomac started second and ended up sixth in a poor ride for him and his team. Still, it’s down to five points now and that’s a whole lot better than the 20 right? Let’s break down the east and west coast chases coming into this final round in Las Vegas.

On the east it’s GEICO Honda’s Wil Hahn who is up five points on Roczen’s teammate Marvin Musquin. Yeah, that’s right. It’s Red Bull KTM who’s up five on a GEICO guy on one coast and down five to a GEICO guy on the other coast.
Somewhere out there, Mitch Payton is planning his 2014 takeover of supercross but for now, congrats to both of these teams. No matter what happens, it’s been a great indoor season for these guys.

So anyways, back to the title chase. In Las Vegas, it’s a bit of a different deal where both coasts are combined to race an east/west shootout right before the 450SX main event but where normally the heat races go, the very first two races of the night, it’s now replaced by the east and west main events. All the qualifying is done beforehand and then for the racers in the hunts, it’s about a three-hour long excruciating wait. Ken Roczen needs to stay off the ground in Las Vegas if he wants to walk away with the west region 250SX crown. Image: Simon Cudby.

Oh but hold up, there’s more. You see generally the Las Vegas track is constructed with some very hard and slippery dirt. It gets blue-grooved and concrete like. So to prevent the dust from kicking up and dusting the fans, the track guys are forced to lay down some water which in turn makes the track like an ice rink.

Now, in the past it’s been a bit ridiculous out there but last year, knowing the importance of the main events the guys went with a light dusting of water. It was better but it was still very slick. Imagine yourself all amped up to win a title and now imagine yourself trying to control the throttle/clutch and everything else involved with going fast on a dirt bike while you’re essentially on an ice rink.

And another thing to note, it’s 25 points for first, 22 for second and 20 for third. So if Tomac wins and Roczen gets third, they will tie for the title but the tiebreak is wins and Tomac will get it. On the east, if Musquin wins and Hahn gets third then the tie will go to the Frenchman as he’ll have more wins.

So that’s what happens in the event of the tie. But no matter how everyone else does, if Roczen and Hahn get second or better in their races, they win the titles.

So looking at the races, it’s not hard to handicap and see that the points leaders should indeed be able to stay the points leaders after this weekend. I know, up five points and Matthes is predicting they’re going to win. Imagine that? But wait, hear me out. 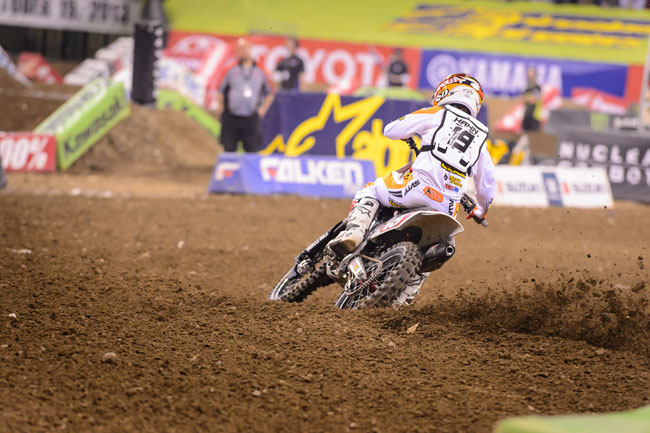 On the east side, Hahn’s last win was a long time ago but it’s an incredibly weak east coast this year. Hahn and Musquin showed that when they came from 19th and 20th in Indianapolis to a 2nd and 3rd. I think Marvin could very easily win on the slick track with his skills of throttle control but I can also very easily see Wil getting second behind him.

Other than Rockstar Racing’s Blake Wharton and Pro Circuit’s Tyler Bowers, there’s no one to stop the top two guys. Hahn’s been on the podium every single race this year so why would this weekend be any different?

On the west, well it’s a bit more up in the air but Ken Roczen, despite his horrific decision in pulling off the track in his heat last weekend, should get it done as he’s just got to get a third or better and excluding SLC, he’s been on the podium every race.

And Tomac, well it’s clear that the Salt Lake soil and Vegas soil won’t be much different and the whoops at SLC gave him a ton of trouble. He’s got to get it figured out in a short amount of time or the kickings in the butt that his Honda was giving him will still be there this Saturday.

And don’t forget the shootout takes the top ten in each main event and puts them out there for ten laps of fury. And the OEM’s pay full main event bonuses for this race and if you’re not in the title hunt, nothing like ending the season beating the best of the best right? Should be some great racing.

So this weekend should feature some incredible racing and high drama on the track in the 250SX class and it might be the first time in recent history where the fans just get up and leave after the shoot out! Stay tuned to see who’s happy and who’s heartbroken.