Motorex KTM's Todd Waters speaks about his superb debut aboard the 450 SX-F at Raymond Terrace.

A new wave of rising Australian talent is emerging and at the head of the pack on a domestic level is Motorex KTM’s Todd Waters, the current number two in the Monster Energy MX Nationals and winner of last weekend’s opening round at Raymond Terrace.

With 2012 MX1 champion Josh Coppins retired, Waters was instantly elevated as title favourite after taking the series down to the wire last season. A switch to Motorex KTM Racing during the off-season did little to halt his momentum, resulting in a clean-sweep of the season opener.

MotoOnline.com.au called the talented 22-year-old this afternoon to speak about his form and he also spoke out about his desire to head to the Motocross World Championship, potentially as soon as 2014. Without a doubt, Todd Waters will be Australia’s next international export. Todd Waters’ win was a result of hard work during the pre-season. Image: Simon Makker/Makkreative.com.

Congratulations on dominating the opening round of the MX Nationals, it was an amazing way to get your season started upon return with Motorex KTM, so you must be pretty excited with that performance?

Yeah, it was a good day, what we’ve been training and working hard for during the pre-season with KTM. After coming off second best last year it’s made me more determined and I want to win this championship more than ever.

I went to the des Nations last year and it opened my eyes to see what’s out there in the rest of the world, so my main focus is getting over there as quick as I can. So to come out and dominate the first round is definitely a step in the right direction for going overseas.

Entering the weekend, as far as predictions went, nobody really knew who would be where. You took what I think was your first pole position in the GoPro Super Pole and won both motos with relative ease, so were you surprised by that at all considering all the hype in the lead-up?

Look, I wasn’t so much surprised as such, but I was pretty pumped to get pole position because that’s not something I’m really known for. I’ve been working hard to change that and it shows my training is on track and what I’m working towards is going to plan.

I’m pumped with the pole and obviously I’ve been riding so closely with Cody Cooper in New Zealand, I knew when I came back here on my own turf, got settled and got the bike the way I wanted it, that we could run up there and stick it to Cody.

He was definitely a main threat in my eyes, but it turned out to be a good day for me with some good starts, and yeah… we just made it happen so I was pretty pumped with that.

You did the New Zealand series, but this was your first real race with the full structure of Motorex KTM around you. So did you learn anything more about the 450 SX-F during the weekend? Will there be any changes for upcoming rounds or did that trip set you up, ready to go?

Yea, the New Zealand trip pretty much set it up. From where we started at the first round over there to where we ended up was massive. We made a heap of changes, got to work together and know each other really well as well. The team on the weekend worked like clockwork, we knew what we had to do and we spoke about it before the round. We did exactly did and it was a picture perfect day, really. 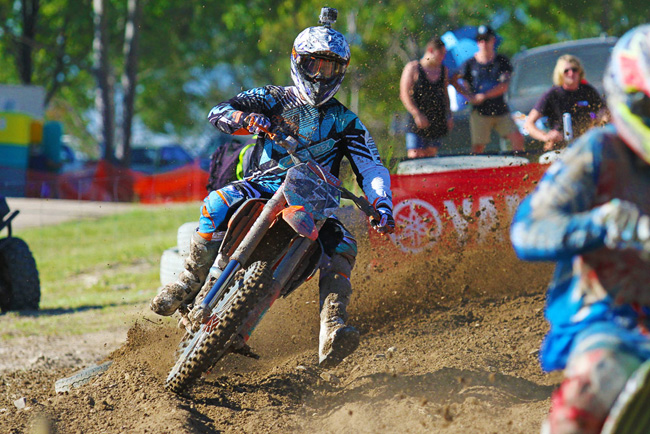 Waters was in epic form on debut with Motorex KTM at MX Central. Image: Simon Makker/Makkreative.com.

At the end of last year when you signed with KTM after such a good year with Suzuki, a lot of people were saying it was a big risk considering the year you had was so strong. But you seemed confident all along that you could return to the European bike without a problem since you rode them earlier in your career. Does this result straight up at round one justify your decision?

Like you just said, a lot of people were throwing it up in the air and reckoned I made the wrong decision, so it’s good to go out there and prove those guys wrong. The KTM is a great bike and it showed on the weekend – it dominated all over the world in every single category. The Europeans are coming out and hitting it hard, plus obviously they are snatching up a lot of good riders as well, which is part of their success.

It’s all going to plan, we have a long way to go and I will keep my head on top of my shoulders. I’ll race the Sunny States, keep building and working. This is just the start of where we’re at, we’re only going to get better and stronger, so hopefully we can continue that success throughout the season.

You mentioned how determined you are to go to Europe and you have some guest rides lined up with KTM from memory. On the track, it seems like you’re racing the track with the goal of being in the world championship. Is that the way you’re approaching this series, rather than aiming to win every race? You’re just aiming to be the best can be right now, aren’t you?

Exactly, and it’s working for me. When I focus on results it never seems to work out, so that’s something I’m working toward this year, trying to better myself. You know, I can’t control how Cody Cooper or anybody rocks up, but I can control how I do, so that’s what I’m focusing on.

It’s the same with the team as well, Motorex KTM doesn’t care what anybody else is doing, we’re there to race and get the bike the best that we can. Hopefully we’ll go over and do a couple of GPs and it will open up some doors for me next year. 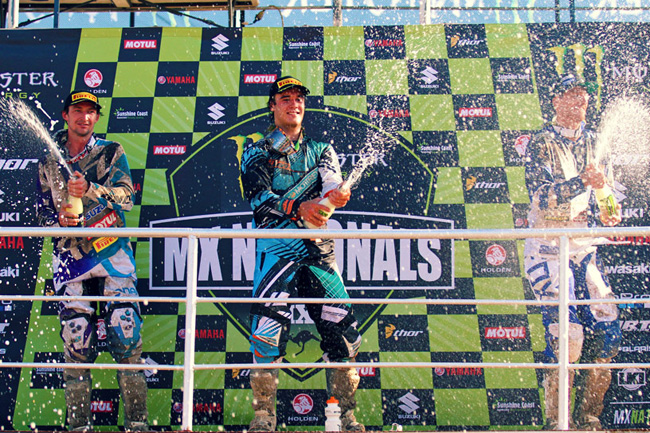 It’s still early days, but the transition has been a smooth one for you so far. If it continues in this direction, is there a chance we could see you overseas full time in 2014?

Well it all depends on opportunity and what comes to the table, but I’ll be definitely chasing those rides overseas and trying to further my career to reach my dream. But that’s something we’ll have to wait and see, it is still early days, so we’ll focus on the present, keep training hard and try to better myself and the bike. Until then, we’ll get back to it.

In the past we’ve seen guys like Chad Reed, Brett Metcalfe and Andrew McFarlane go to Europe and then head to America later from there. The trend changed and a few riders went to the US first, but now it seems guys like yourself and recently Dean Ferris want to race in Europe. What is it about the world championship that appeals to you?

Europe to me is all about the racing. In America there’s a lot of hype behind the scenes and the riders, a lot of press stuff, that type of thing. America is pushed a lot more in the Australian scene so we know everything they’re doing, but not so much about the European side of things.

Racing the des Nations opened up my eyes, just seeing how hard those guys ride and the depth of the field is crazy. I think the Australian riders going to America first is kind of like a shortcut, you could say. Going to Europe is like learning the trade and learning to be a better rider. It’s not easy over there with the different languages and stuff, so I think it just toughens you up.

Chad, Andrew McFarlane and Metcalfe going to Europe first, I think that was a big part of their success. They knew what they had to do, they’d already trained hard and they were ready. There were no distractions.

Awesome, well again nice work on the weekend, it sets up a great series ahead and it’s a great reward for Motorex KTM as well. Well done!

Thank you very much, thanks for the interview and I have to give a massive shout out to KTM for making it happen this year.