Springtime here in America (wasn’t that a Supertramp album?) means one thing and one thing only, the Daytona SX! The longest running supercross, the race takes place inside the giant oval that is the NASCAR track (actually it takes place between the oval and pit lane) and is a most unique race. Consisted of sand, clay, black dirt and some rocks – it’s a supercros unlike any other. Some news and notes from Daytona:

Well folks, Monster Energy Kawasaki’s Ryan Villopoto won for the third time in four races in a nice ride and has now moved into the series points lead for the first time all year. And I don’t think he intends to let go of the red number plate. The two-time defending champion has certainly figured out his early season inconsistency and looks pretty good right now.

In Daytona, he crushed it with some great riding including going from first to third and back to first again. The Daytona track was a tough one, there was no place to rest and as Villopoto mentioned a few times, the lighting (or lack thereof) was an issue out there in the dark dirt.

I can’t see Villopoto letting this plate go from here unless he crashes out. And I think he’s smarter than that, his early season issues seem to be figured out and right now, I don’t see anyone capable of holding him off if he’s behind them. His starts seem to be better and although the tracks have basically sucked dead goats this year and allowed he who starts out front to finish out front, I see RV making it happen. He’s also made a triple clamp change in recent weeks which changed his offset and made his Kawasaki a tad better. Look out 450SX class, the angry ginger is back 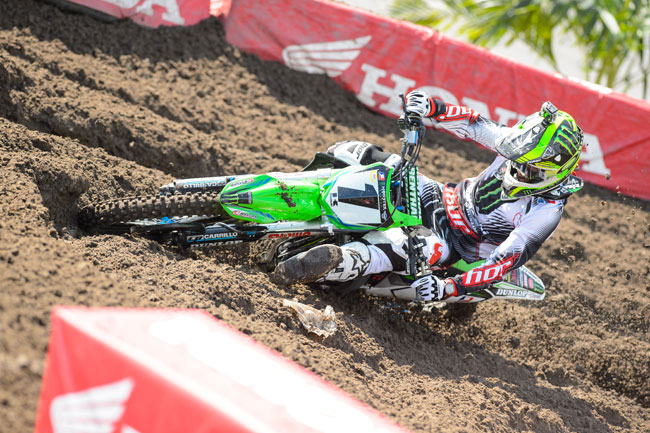 Ryan Villopoto is back in control of the 450SX class after a dominant Daytona win. Image: Simon Cudby.

James Stewart always provides a show at Daytona but this year, it was a little unlike JS7. He’s gotten much better from the start of the year-to the point where he won a race a couple of weeks ago – and going into Daytona, it looked like things were set up for another Stewart/Villopoto battle.

Stewart’s been very good the last few weeks but in Daytona, after logging the second fastest practice time, he suffered a bad start, went down shortly after that and the magic just wasn’t there. On the positive side, he did wheelie and jump a triple that no one was really doing in the heat race and main event (Justin Barcia started doing it in the main) but it wasn’t enough. Stewart’s been very good at Daytona over the years but this year, it was not to be.

Chad Reed was pissed off after the race at his fifth place finish as he had a bad start and then a nice crash that really set him back early in then main. But the Two-Two Motorsports rider had a nice race that he really shouldn’t be upset at. A fifth isn’t what he wanted but his speed was there, he was very good all day long on his Honda.

In the heat race he went down early and had to fight back to fifth in there which gave him tenth pick on the gate that heavily favored the inside gate as it was two left turns in a row. That pretty much doomed Chad from the start but he had two come from the back rides in both the heat and the main. I suppose that’s not worth all that much but hey, I thought it was good.

JGR Yamaha has won at Daytona before in NASCAR and on the bikes last year (they actually went 1-2 last year with James Stewart and Davi Millsaps) but 2013 didn’t go so well. Justin Brayton hit his head early in the main and called it a night and that was it. The teams’ fill-in rider Kyle Chisholm crashed hard at Atlanta and is scheduled for surgery this week. And the teams original rider Josh Grant is hurt yet again and won’t be ready until the start of the motocross season. The JGRMX/Toyota/Yamaha crew can’t seem to catch a break in 2013. Image: Simon Cudby.

I had a good talk with team owner Coy Gibbs and he was pretty down about the team’s state of affairs right now. He’s got no plans to fill in for the injured fill-in and the losing two riders before the supercross season was half over isn’t a good deal for the team. The JGR team has tried everything in it’s seven seasons from hiring riders who had talent but hadn’t lived up to it (Josh Hansen) to steady reliable guys (Justin Brayton) to superstars (James Stewart) to trying riders twice (Josh Grant and Brayton) and it hasn’t been able to find steady success so far. Maybe the new 2014 Yamaha YZ450F will help out but for now, the JGR team is limping along.

Amateur superstar Adam Cianciarulo is next in line for greatness over here following in the footsteps of other Team Green kids like Ricky Carmichael and James Stewart. In fact, Cianciarulo is the fastest guy in the amateurs that many have seen since Stewart. With a lengthy contract to stay on green as an amateur and then step onto the Monster Pro Circuit team once he’s ready to turn pro, it seems that some very important people feel this way also.

In a perfect world Cianciarulo would turn pro this summer for the PC team but it’s very much in doubt as of right now. Adam’s been injured and just getting back on the bike now, the Pro Circuit team is packed with riders for this summer’s outdoors (four 250 riders and two 450 riders) and Adam doesn’t have a ton of experience on the 250 (just one race on one where he won one moto and crashed in the other at the Monster Energy Cup).

So there are some within Pro Circuit that want him to ride amateurs this year and debut at supercross in 2014 while Adam and his family would prefer he turn pro for the first national at Hangtown. And the third option is to ride amateur races this summer and turn pro at the last few nationals this year. Stay tuned to see how this little skirmish turns out.