I wrote a story a long time ago about Mike Alessi and his father Tony. This was shortly after Suzuki didn’t bring him back after an injury suffered while leading the 2009 450MX nationals. Mike was looking for good for winning the whole shebang after dominating two races in a row but disaster struck and he broke a kneecap while practicing before round four. It was a cruel blow for the 800 who certainly looked to be prime to win his first major championship in his career.

And here we are in 2013 and Mike is still looking for his first professional title. The most successful amateur motocross racer ever when he turned pro, Alessi’s been the bridesmaid a few times but hasn’t been able to stand atop the podium yet at the end of a series. His career probably hasn’t gone the way that he, or many others, thought it would but at this point, twenty-four years old, Mike’s in a good place on the Motoconcepts Racing team.

There are many in the pits who aren’t fans of Mike’s dad Tony for forgetting to leave the amateur motocross tactics back in amateurs but Tony’s gotten better, Mike’s learned a few tricks and at this point, he’s a top ten rider in supercross and top five guy in motocross. And that’s year in and year out, no matter who shows up to race.

On the Motoconcepts team Tony gets to do what he’s always wanted to do – have complete control over the motorcycle and work with his son closely. The other teams that Mike has been on the past didn’t like the interference that Tony provided and it’s caused more than a few problems at factory Suzuki, factory KTM and basically scared Honda away from picking Mike up right out of amateurs. 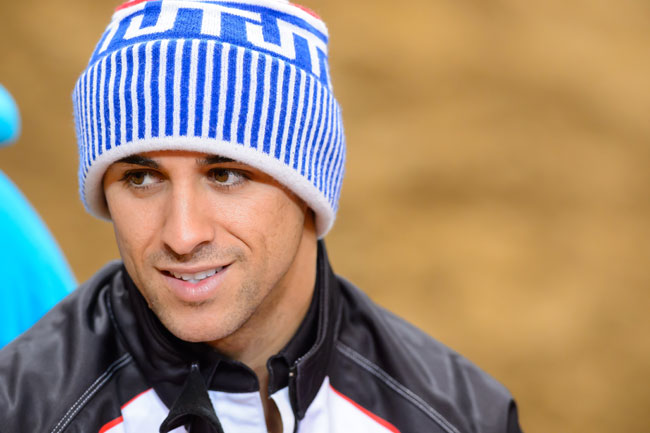 Mike Alessi’s unique program has been a hot topic throughout his career. Image: Simon Cudby.

But we’re here in 2013, Mike’s on a Suzuki with Ohlins suspension, with a motor builder that’s a bit of a mystery but he’s still out there in the trenches digging deep to be the bets he can be. Mike knows that supercross isn’t his thing, in fact there isn’t a rider in the field with the discrepancy between his indoor and outdoor skills like Mike has, but that doesn’t stop the 800 from trying his best each and every time out there. It’s like the start of every main sees Mike forget all about the fact he can’t make a podium indoors (the odds are long, let’s face facts) and he just goes for it, this past weekend at St Louis being the latest example when he led a lap and ran up front.

When I worked at factory Yamaha, David Vuillemin told me that why would he want to get a holeshot when he’s just going to get fifth anyways? DV surmised that getting a tenth place start and working his way up to fifth looked way better than the latter.

Alessi shuns that theory, he wants to get the start, run the pace and try to get better. Despite the fact that he doesn’t seem to be, Mike’s a racer. That’s what he does – he strives to be the best he can be and doesn’t accept his place in supercross easily like a few others.
Last summer, in a field that was devastated with injuries, Alessi was battling with KTM’s Ryan Dungey every week and I’m sure many races Ryan was cursing under his helmet as he saw the 800 in front of him. The second half of the nationals usually went like this:

1 – Mike Alessi grabs the holeshot.
2 – Ryan Dungey gets into second quickly.
3 – Dungey spends two to three laps trying to get by Mike who fights him every inch of the way using little tricks like pushing Ryan wide, gassing it the insides of every turn and seemingly having a rear view mirror on his machine.
4 – Dungey eventually gets by and pulls a huge lead out while Mike rides around in second.
5 – Repeat the next week. 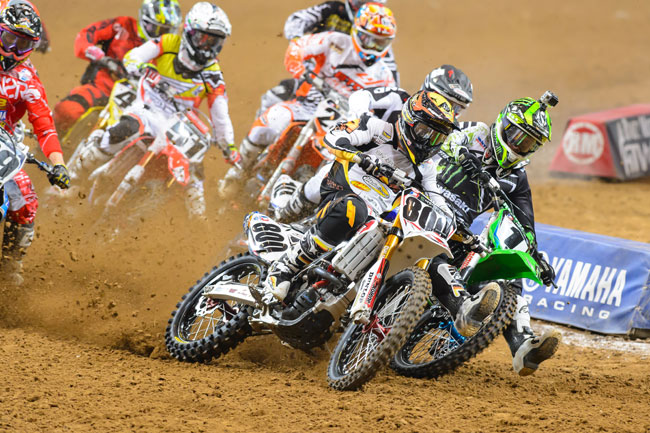 You can count on Alessi being up front off the start nine times out of ten. Image: Simon Cudby.

It didn’t matter to Alessi that Dungey was proven to be faster than Mike, nope – he had very selective memory and seemed to think he was in Dungey’s class. Trust me when I say that there aren’t too many riders that think like this. Many of them find their place each and every week but not Mike – nope he tries his hardest to win each time out.

I’ve criticized the Alessi’s over the years for their antics on various teams over the years and I stand by those words. I think that they’ve matured a bit, been able to look in the mirror a bit and are in a better place than they were back then. There’s one thing though that you can’t say about Mike and his father Tony – they never, ever, ever stop trying to be better. On and off the track. There’s one goal and one thought the whole time and it’s admirable in a way.

As well Motoconcepts Racing owner Mike Genova has taken a liking to Mike and Tony and he’s surrendered certain aspects to Mike and Tony, which has made them in turn relax on some of the actions on the track that caused many to shake their heads. As long as there’s a start gate falling in front of him, Mike Alessi will try to be the first one out of it. And that’s something we should celebrate.