It’s been a trying season for the number seven of James Stewart. The Yoshimura Suzuki rider started off 2013 hoping to capture a third supercross title and that idea went to shit right about the time practice ended and his knee caught the ground in an awkward angle.

That was it- a little dab in the wrong place at the wrong time and all of Stewart’s hard work went down the drain. We know how it’s been playing out with Stewart unable to make a podium, yes a podium you read that right, for the first seven rounds of the series.

But it all came together this past weekend in Atlanta when Stewart grabbed the holeshot and with two-time and defending champion Ryan Villopoto right behind him, he rode a strong twenty laps to take his first win of the season. It’s remarkable to consider Stewart an spolier in this series but that’s what he is right now. With a knee that’s coming around and out of the title hunt, he’s got nothing to lose at this point. 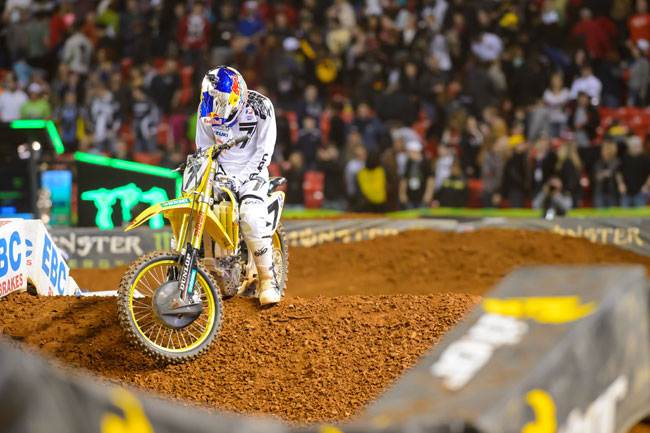 James Stewart’s win was certainly a relieving one for the former champion. Image: Simon Cudby.

“Considering how the year has been, going into San Diego I started feeling better and started getting my fitness back” says Stewart about his knee “I got a fourth at Anaheim 3 and San Diego but a bunch of guys fell in San Diego so it was probably more like a sixth or so. But I was riding better and going into Dallas I was able to put a couple of days of hard riding in and I felt good going into there. You never know though, doing twenty at the house is different.”

At Dallas his machine let him down after catching and passing Villopoto for the heat race win but in Atlanta everything lined up for Stewart. But the question that I, and many others had, was if James fitness level was where it needed to be. Consider that answered right then and there.

Often a lightning rod for criticism, Stewart knows that it comes with the game of being who he is and the color of his skin. Many people wondered what his motivation was in staying in the series and clearly not being the rider he once was. That got a lot of rumors started about just staying in to get paid and that’s all he was doing.

Years ago, on a Kawasaki, Stewart tore his knee up and exited stage right in the series. That move prompted criticism of him not being tough enough to be a champion and why can’t he just ride around and accept getting beat? You see, no matter what choice he makes, it’s the wrong one in the eyes of his many critics. It’s part of being who he is though. Stewart looks to be winning the battle with his early season knee injury. Image: Simon Cudby.

“Two or three years ago I would’ve pulled out (of the series)” he says “Being older and the way the 2012 motocross season went, with my whole team behind me, I want to fight through this and I know I can. I got through the first few races and was getting better but the finishes were getting worse. But I started being able to start cycling again and the only time that it (the knee) bothered me was at Oakland when we had that second turn pile-up.

When the tracks get tougher, my skills come out and I ride it pretty good. I’m not 100% yet but I’m way better than I was two weeks ago and I’ll be better two weeks from now.”

Stewart’s happy with the win and even better for him was the way it happened. “Atlanta was the toughest track off the year and having Ryan there was good. Heck he hasn’t been tested a full twenty laps yet either. To do it and the way I did it and to know I had more in the tank if I had it was cool.

I actually thought I rode better in Dallas and instead of going to the races hoping to get through, I’m hoping to win. According to someone they’re not racing me and they’re not concerned about me so hopefully they’ll just let me win and not worry about me.”

I think that the whole 450SX class has got something to deal with right now and that something is a getting healthier by the day James Stewart.