PulpMX's Steve Matthes checks in direct from the US every Thursday, presented by Fox. Full Story

The 250SX West series is now on an eight-week break and the 250SX eastern series kicks off. The west series has been a great one with KTM’s Ken Roczen going 2-2-2-1-1-2 to hold the points lead over Honda’s Eli Tomac who has been almost as superb except for that one DNF in Oakland when he crashed.

After those guys it’s Honda’s Cole Seely and Suzuki’s Jason Anderson. For the most part the west series has been as deep as ever before with six former race winners who started Anaheim 1.

So now we’re on the east side and most pundits would tell you that the east doesn’t have the depth of the west with only two former winners (Dean Wilson and Blake Wharton) lining up for the opening round in Dallas. Still it should provide us with some great racing and with the lack of past champions and race winners, it will inspire confidence to the newbies.

All in all it should be interesting to see how it plays out and to help you guys out, I’ve broken the series up by category. Oh and I didn’t put in injured riders like Darryn Durham, Alex Martin, Nicco Izzi and Justin Bogle. As bad as the west series has been for the Pro Circuit team it looks like the east series should go much better with Monster Energy Pro Circuit’s Dean Wilson the favorite. Unless of course Wilson gets hurt or something and at that point, I’d look for a guy in a wheelchair to perhaps roll himself off a cliff. For a guy that’s won as much as Mitch Payton, he’s not one to just accept getting beat easily.

Wilson, who was all set to jump to 450’s until his team disintegrated, is back down on a 250 to get the one thing that he doesn’t have – a 250SX championship. He’s got the most wins by far out of anyone else in the class, he’s raced Justin Barcia and Eli Tomac as close as one could possibly do and not win a title. He’s the odds on favorite to finally end that SX title drought.

Will Win Some Races and If Something Happens to Dean, Maybe Even the Title Category:

Red Bull KTM’s Marvin Musquin and GEICO Honda’s Wil Hahn are both veterans in the class, on good teams and therefore have good bikes. Neither rider has ever won a 250SX so it’s hard to just say they’re going to take that leap to a title winner but as I said, if something happens to Dean, one of these two will get it done.

By all accounts, the Frenchman Musquin has been flying this off-season and I hear the same things about Hahn. I think both guys could win some races and both will be all over the podium when it’s said and done. I give the slight edge to Musquin as his indoor skills are pretty legit but Hahn’s a gamer. Darryn Durham is a previous winner, but injuries have plagued him for the past couple of years. Image: Simon Cudby.

Could Win a Race But Pretty Small Chance of the Title Category:

Rockstar Energy Racing’s Blake Wharton’s got a couple of supercross wins under his belt (one last year) and there’s no doubt that the veteran’s team is on a roll. Maybe there’s something there with the entire Rockstar Energy Racing team. I can see Blake winning a race if the stars and moons align for him but as far as the title, I don’t see it. Then again, I didn’t see the title lining up for one Mr [Davi] Millsaps so what do I know? One thing for sure, Wharton will have the best hair in the class.

They’re Rookies but They’re on Great Teams and Bikes Category:

GEICO Honda’s Zach Bell and Pro Circuit’s Justin Hill are a couple of rookies to supercross but they’ll be fine, look at the teams and bikes they have under them. They’re the unknown right now but both kids are coming into the series with a bit of a late start due to injuries. Bell’s got great speed but can’t seem to stay on two wheels and Hill, well I’m not really sure.

We’ll see what both of these rookies can do but there’s no doubt they’ll be in position for podiums but wins and titles, well methinks they’re going to have to wait a little while the big boys fight it out. 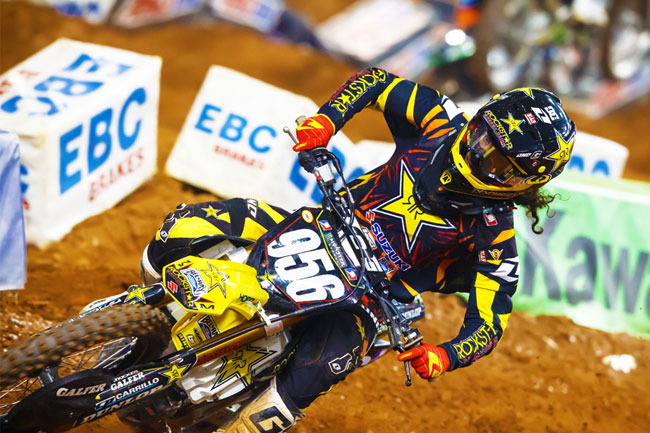 The Canadian That I’m Cheering For and Could Get a Podium Category:

And Cole Thompson has this spot all to himself as the northerner is the only rider that I can cheer for on the east side. Being a Canadian, I’d love for Cole to do well but the odds are against him.

He’s a full privateer on a Honda (he got a fill-in with Star Yamaha for the last few outdoors last year but didn’t do well) and looking to improve on his rookie year last year where he had a couple of top tens but also crashed out and missed out on some mains. He’s number 48 in the program but number 1 in my heart. Oh Canada indeed!

The Rest of the Best Category:

Jab Motorsports Gannon Audette is a kid that’s looking for another shot at supercross after breaking his wrist at the first round last year and his teammate is Vann Martin who’s still searching for consistency. Motoconcepts Racing’s Gavin Faith impressed last year as a rookie in the 450 class and this year has a good ride in the 250 class. He’s a definite top ten guy, maybe better.

Jimmy DeCostis had a ride with GEICO last year but wrecked his knee and never got to see what he could do with the bike – he’s back now as a full privateer and he could be pretty good. Kyle Peters was on Star Yamaha last year and this year he’s coming back for another try at supercross. Peters is a good starter so he’s got that going for him.

All in all, the depth isn’t there in the 250 east series but it’s certainly got some real talent and the good thing about the lack of past winners is it does allow a new hero to emerge. What are we going to see? Stay tuned this weekend.