Being somebody who’s a fan of both motocross and road racing, Yamaha’s YZ450GP bike is a ride that holds particular interest to me. Using the YZ450F motocross bike as a platform, its intention is to be an introductory race bike for aspiring road racers and so far it’s proven pretty popular.

Yamaha Motor Australia and Yamaha Racing Developments (YRD) are the companies behind the YZ450GP, which is available for $16,625 ready to race. On a national level, you can race them in the newly formed GP450 category at the FX-Superbike events throughout the east coast.

This entry level class makes use of relatively inexpensive MX bikes that are available from nearly every manufacturer. These models are lightly modified to become genuine road racers that are capable of similar lap times as 125GP bikes at most circuits, according to Yamaha.

“The 450GP class is aimed at encouraging newcomers to the sport,” said YRD boss John Redding. “With the help of Yamaha Motor Australia, the RRP of the YZ450GP machine is subsidised to help competitors enter this new and exciting race class. Plus if racers are serious about competing and have an existing YZ450F, we can supply kits for them to build themselves.” YRD is offering for sale a limited quantity of ready to ride 2013 YZ450GPs fitted with the road race kit as tested. All the MX componentry removed from the new 2013 YZ450F bike is included. Retrofitting the MX gear is possible at any time because the GP kit does not require any permanent modifications to install.

The kit comprises the following products:

Each YZ450GP is supplied built up ready to ride with a selection of 14, 15 and 16 tooth front sprockets. During a mid-December test at Queensland Raceway last year, I came away impressed with the basic capabilities of the 450GP.

It feels like a road race bike, performs like one for the most part, and no doubt provides the sensation of real road racing at a cost effective price – especially if you crash, because these bikes won’t be as expensive to repair unless something goes drastically wrong. Their light weight reduces cartwheel effects compared to your 600cc four-strokes, etc.

It has a reasonably tall feel to it, but once on track it begins to feel more natural. Yamaha’s test bike initially had the handlebars uncomfortably low, which in turn made the rear feel high, in a bid to put more weight over the front.

However, once we raised them to suit me it was a lot more conventional and I was able to move my body position around more freely and work with the bike rather than reaching so low to the ’bars. 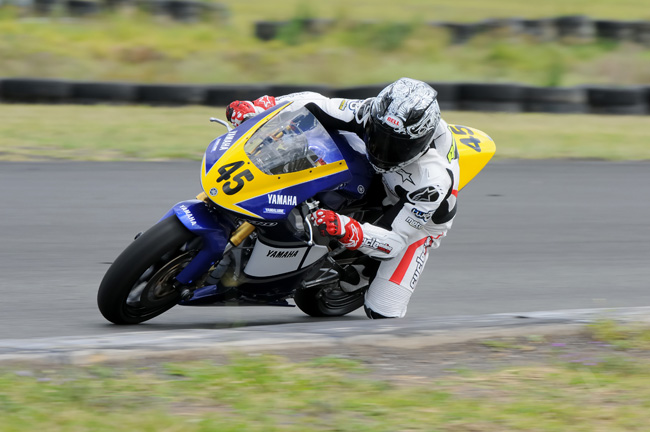 In saying all that though, I had my knee on the deck right away and the Metzler tyres serve their purpose well. The suspension was surprisingly good from the outset, responsive and well developed, and I didn’t really feel the need to change the settings during my few sessions.

The key to riding these bikes quickly is to carry a lot of corner speed, a lot of rolling momentum and getting a feel for the front-end.

The throttle response is smooth and the YZ450F is recognised in motocross for featuring a powerful motor. When on road race tracks, that power is vital and it converts nicely into a track-based bike.

What I’m not a fan of is the vibration, but I’m sure there are ways around that once you have one for yourself to play with. 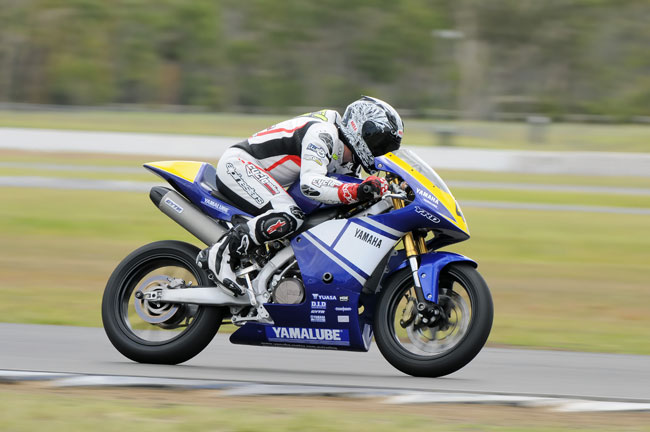 The power is reasonable for an entry level bike, best suited to tighter race tracks to use the torque. Image: Keith Muir.

Queensland Raceway has a pretty flowing second turn onto the long back straight, so you’re already in the higher gears as you tuck in for the straight. It’s not really a problem though, because once it reaches near its peak then the revs remain steady in top gear until you reach the next turn.

Down shifting and up shifting are both easy, but you do have to keep in mind that they don’t have slipper clutches (throttle blipping or clutch control helps here).

Overall, Yamaha has a solid option here for motocrossers interested in road racing, or even your general track day rider who may be looking to enter racing at a cost effective level.

It’ll provide a base to learn the ropes and that’s exactly what the category’s intention is. Even better, you can turn it back into a motocross bike if you’re not 100 percent sold it’s right for you. If you’re interested in a YZ450GP of your own and are keen on hitting the black top, forward all enquiries to John Redding at YRD on [email protected] or 0438 105303. Chances are you’ll be impressed!