Coming off a standout year last season, Honda’s CRF250R was the most successful Lites contender on the market in 2012 when it comes to racing, with just minimal modifications made for the 2013 contender. It won both the Australian motocross and supercross series, as well as both the Western and Eastern supercross titles in the US.

In standard trim, Honda has been recognised for building a very competitive 250F since their inception in 2004 and it’s steadily been building momentum ever since. It’s a relatively tame model, a very solid all-round package for a variety of riders, but will take a few modifications if you plan to race it at a competitive state or national level (as do most models in the current era). The CRF250R is once again very solid in the handling department. Image: Adam Spence.

Honda has made a few slight revisions to the 2013 CRF250R, but nothing major. Apart from the BNGs (Bold New Graphics), it’s received a recalibrated fuel injection setting to improve bottom-end and mid-range, plus the forks have stiffer springs than the model it replaces. The rest? It’s all identical to last year’s version.

First things first, what you have to love about any Honda is the fact that they wear so well, meaning that even after you ride it a number of times, unless you crash reasonably hard, the plastics and general look of the bike remains near perfect. Essentially, it stays new for ‘longer’, and you’ve got the hand it to big red for the quality of build they churn out each year.

Ergonomically the bike feels slim and the Renthal handlebars are a nice, neutral bend, with a balanced relationship between the handlebars, seat and footpegs. The footpegs are pretty narrow, but have a good amount of grip for the most part. What I do commend Honda on is the seat, because the gripper is spot on. As for the levers and everything along those lines, the key word here once again is quality – everything just feels right. On track, the motor isn’t the strongest of the class, instead providing a very linear powerband that’s electric smooth. Honda has aimed to improve bottom-end and mid-range, but it’s still lacking in our experience. It may be slightly deceiving because of the whispering exhaust note, but it just doesn’t have the sheer grunt that we’ve felt on other models of late. To be fair, the model sent to us was brand new and we only had two days on the bike, so usually they do tend to break in and open up with a few more hours on the clock.

The operation of the engine is first class though, with a great throttle response, consistent power delivery and user-friendly feel from bottom to top. Honda’s are known to have the ability of being able to extract extra power with just limited modifications, so the first thing I’d be doing is bolting on an aftermarket exhaust and working forward from there.

If handling is your focus, you can’t go wrong with the 2013 Honda CRF250R. During our review period, the bike was amazing and only got better with additional seat time. It has a slightly softer and more absorbing feel than, say the Kawasaki, but the way it tracts through corners and steers leaves you stoked upon every lap. Honda has a rich history of releasing very well handling chassis and the latest 250F is definitely on point. The stiffer forks seem to balance the bike under heavy braking or down hills, not so much in the way the front-end feels, but more so in the back-end’s behavior. It stays planted better and the balance is on point.

Upon acceleration, even with some sharp acceleration bumps up and down the hills at the Macarthur Motorcycle Club in Appin, NSW, the rear shock rode through them consistently and allowed me to open the gas all the way through them with positive feedback. If you’re a racer (or even a heavier rider 75-plus kilograms) you may want to firm up the suspension and get it a little more control, but for the most part it’s a great starting point and is more than capable for a rider of my level.

What I feel when aboard the CRF250R is that it has a large window of operating potential. What I mean by that is you can either cruise and it will work with you, or even if you do begin to ride toward the edge of your limitations, it’s the type of bike that will allows you to push that envelope – only to a certain extent though! 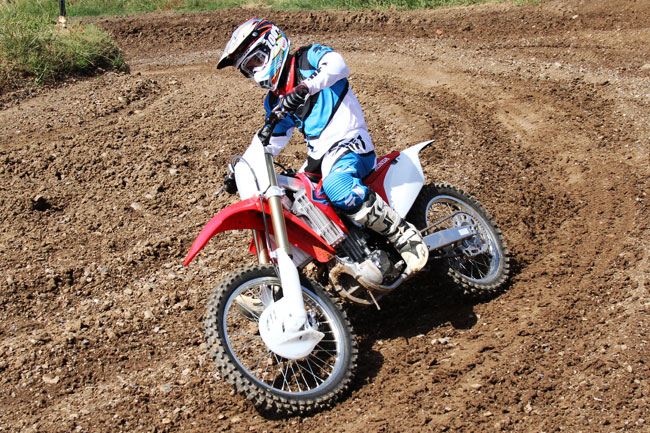 The 2013 CRF250R’s smooth motor and great handling means that it caters to a range of riders. Image: Adam Spence.

The brakes are another responsive aspect of the bike, pretty soft in the way they’re applied, but consistently strong when it comes to pulling the bike up in a hurry. Again, they’re quality components that will rate well over the test of time if you own the bike and maintain it well.

At $10,660, you’re getting a great value bike that will easily serve you well over a few years if that’s what you’re looking to buy, or if you are a racer, it’s a solid platform to build your ride for the 2013 season. You only have to look at its results tally from around the globe to understand just how capable the Honda is.

For the complete technical rundown on the 2013 Honda CRF250R, click this link and be sure to take the time and watch the video MotoOnline.com.au compiled from our test in December.