I bet times are tough right for you Aussie fans that follow American supercross. I’ve met so many Aussie’s who say they follow the USA SX/MX stuff with a passion, it’s ridiculous.

The three crown jewels of Aussie riders-the originals, the trailblazers are struggling so far (with apologies to the great Jeff Leisk who came to America for three years, accomplished national number five and then left for part two of a career racing the GPs) and three Aussies representing the green and gold need your support more than ever before.

First up is Brett Metcalfe, he’s been in America for just over ten years now and produced a few wins, a ton of podiums and rides on the factory KTM, factory Suzuki, Yamaha of Troy, GEICO Honda and Pro Circuit Kawasaki teams prove his worth. Brett’s one of the great guys in the pits and right now that’s the only place, he’s been in the pits.

Last year a bad practice crash while on Suzuki (he ran out of gas when the team didn’t put the oversize tank on) left him with leg and wrist injuries that put him out for the rest of the nationals and put him behind when it came to getting a ride for 2013. Metty’s never been great at supercross but he’s a solid top 10 guy and outdoors, he’s very, very quick. Brett Metcalfe, a former AMA Motocross overall winner, could be a privateer for the 2013 outdoor season.

I’m not sure if it’s the injuries or the lack of faith for Brett but there wasn’t anything there for him in terms of rides here in America. A lot of veterans like Metcalfe, Tommy Hahn and Ivan Tedesco (among others) were left with no chair once the music stopped and I suppose that’s just evolution-that’s the way this sport works-but for Pete’s sake, Metcalfe won a national just 16 months ago!

In speaking to Brett’s agent, the plan was if nothing came around Metty was going to take the supercross season off to heal up and make sure he hits the ground running 100 percent for this summers nationals. It was just going to be a six month sabbatical for Metcalfe and besides, he and his wife just had their first child so why not just kick it and enjoy all of life’s treasures? Metcalfe was in deep talks with the Valli Yamaha squad to ride 450’s outdoors and it seemed that it was a done deal. That is, until it wasn’t.

Talks broke down late in the game and as of right now, Metcalfe has no ride and may privateer it for the nationals. Maybe there will be an injury and Brett can fill in but that’s probably the best case scenario right now for a guy that seems to be (from the outside) getting the short end of a stick.

Michael Byrne, the first of the new-age Aussies to come here in 1999, is currently healing up from a leg injury suffered last year in August at the Unadilla national (while he was leading). Unlike Metcalfe, Byrne’s got a ride-and a good one at that with the BTOSports.com KTM team but he’s got to get healthy. Byrne was originally supposed to be ready for Anaheim 1 but there’s been some complications along the way and he’s just getting back riding now. So best case, he’s four weeks away. He’s got to build a base up. 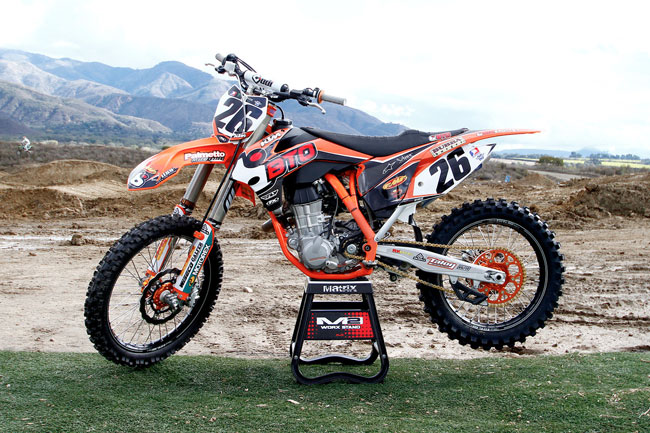 Michael Byrne is hoping to make a return to racing soon, aboard his new orange machine for 2013.

Byrne had sort of a comeback season last summer, he got inside the top ten quite a bit and as we said, he should’ve, could’ve, would’ve won that first moto last summer at ‘Dilla had he not broken his leg, without even crashing! His team switched to KTM’s this past off-season and they’re getting real factory help and everything. This is a real great chance for Michael to try and get back to his old factory Suzuki level. The huge disappointment for Byrne is this is the third supercross season start in a row that he’s missed.

Last season he tore his knee up and was out until the end of supercross, the year before he crashed at Bercy and got another late start. It’s a terrible thing for a racer to jump into a series and try to play catch up on a new bike. Have you seen the depth of the 450SX class this year? The good thing is his teammate Matt Goerke has done well through the first two races, his bike looks to be on point and hopefully bike set-up won’t be too much of a factor. Anyway you look at it, Byrne’s got an uphill climb ahead of him.

And the last musketeer is Chad Reed. The best rider Australia has ever produced is in a much better spot than Metcalfe and Byrne as in he’s racing. And racing pretty well with 4-4 finishes after two races. But here’s the rub, he’s been fortunate to get a couple of fourths and he knows it. Still, they just how you did and not how you did it so Reed being fourth in the points isn’t that bad. Chad Reed has been slightly off the pace so far, but don’t count out the experienced Aussie just yet. Image: Simon Cudby.

But there’s no doubt he’s struggling right now with his riding. He’s been around long enough to know the game and know whether he’s on it or not. Reed’s not happy with the set-up of his new bike, the air fork that all the big guys have gone to hasn’t worked to Reed’s expected level and he’s swapping between last year’s set-up with a coil spring to the spring-less fork.

Another reason why Reed could be frustrated is that he sees the trouble that his main rivals Ryan Villopoto, Ryan Dungey and James Stewart have been having and knows that every point he can put on those three is points he’ll need at the end of the year. He’s not taking advantage of this opportunity and he knows it.

Reed’s been on lockdown at the races as well, usually very generous with his team with the media, Reed’s begged off a couple of interviews as he probably bites his lip, puts his head down and tries to figure this all out. Will he get it? You’d be foolish to think not but the sport stops for no one, it happens to everyone out there whether your name is Rick Johnson or Jeremy McGrath – you get old and lose the edge.

I’m not writing him off by any means but he’s got to get better because through the first two races, he’s been very un-Chad-like.
Reed, Byrne and Metcalfe have done your country proud over the years in 250 and 450 SX and MX along with representing Australia at the Motocross des Nations many times over. It’s been about a 12-year level of excellence for these three riders and their fans. Will it keep going? Well that’s to be determined but make no mistake about it, it’s never been tougher for these three guys. Stay tuned.