MotoOnline.com.au puts the 2013 Kawasaki MX2 threat through its paces.

Kawasaki’s 2013 KX250F has undoubtedly been one of the most anticipated models to be released in the MX2 category. With its updated looks and promises of even more power, plus more, this bike was surely hitting the scene with a large amount of hype. Here at MotoOnline.com.au, we couldn’t wait to get our hands on one.

Most recently Kade Mosig rode his 2013 Monster Energy Kawasaki KX250F to a solid third place overall in the 2012 Terex Australian Supercross Championships, a great result for the newly developed bike on debut.

Personally, I have always had a soft spot for the Kawasaki KX250F, a bike that has always delivered a strong package overall. For 2013 Kawasaki has once again shown they can improve the bike in many areas, raising the bar a few more notches.

Firstly, the most visible change for 2013 is definitely the all-new bodywork. Following in the footsteps of its older brother the KX450F, the MX2 contender now receives the same smooth and seamless styling.

The 2013 KX250F once again receives black number plates, a nice touch that relates specifically to the MX2 class, along with a black rear fender. Combine this with the factory fitted anodized black wheels and you have a winning combination in the looks department. 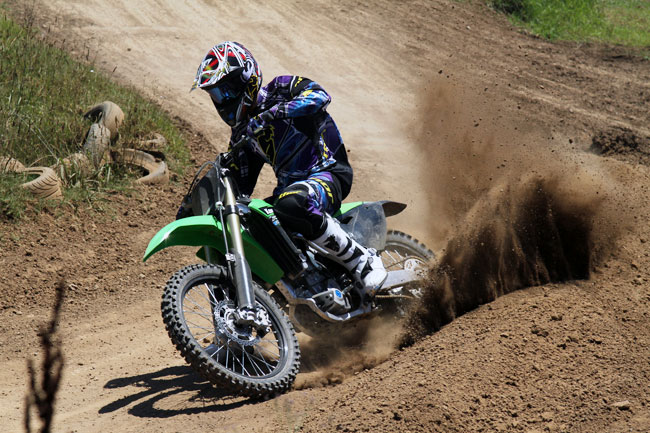 Bold new graphics with a splash of blue have been added, this blue perfectly compliments various engine components which carry the same anodized blue colour scheme – in short, the bike looks fast while it’s still in the pits!

Supporting the new bodywork is a completely revised frame design, which is a total of 4mm narrower than the previous model. This new chassis seamlessly integrates with the new bodywork to not only improve looks, but play a vital role in the bike’s overall feel.

The narrower, smoother and more minimalist look is coupled with a new flatter seat, this creates a very nimble and light feel. This complete redesign of the bodywork and cockpit area has removed the slight ‘lounge chair’ feel that some riders, including myself, have felt in the past.

This new design is topped off with a very comfortable bend of Renthal handlebars – black in colour, of course. The stock bend is a neutral setup, something that will surely suit most riders and after just a slight lever adjustment they felt perfect for me.

Inside the all new chassis design is the the KX250F’s 249cc engine, which has received a range of improvements for 2013. These include a higher compression ratio, revised cam timing, a shorter exhaust with resonator chamber and a straighter intake tract to allow air a more direct route to the combustion chamber. 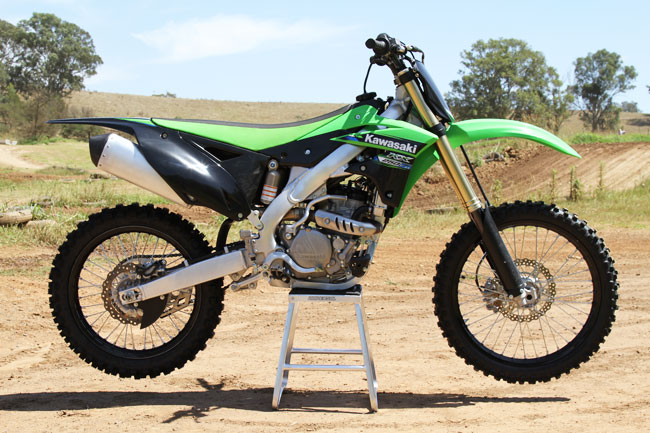 Right off the bat you can tell this motor means business. The unique dual fuel injectors provides even more high-rpm power that extends far into the over-rev, while still remaining strong in the lower rev range. Kawasaki says they focused on improving the mid- to top-end power, and sure did hit the nail on the head on that one.

Adjusting engine settings to suit conditions has never been easier than with the plug-and-play DFI couplers. The KX250F comes with three interchangeable couplers each featuring a unique engine mapping setting for Hard, Normal and Soft track conditions. An optional FI Calibration kit is also available.

Appin’s Macarthur Motorcycle Club in New South Wales provided me with a hard pack and slick surface, and I firstly chose to use the ‘Normal’ coupler initially. It provided broad power throughout the rev range, but at times a more mellow setting would allow me to gain some valuable traction in slick areas.

This is where the interchangeable DFI couplers came into their own, the Kawasaki technicians switched me over to the ‘Hard’ coupler which basically means the mixture is richened. Instantly you could feel a smoother power delivery and a traction gain, providing a smoother and more effortless ride on the sun-baked circuit.

The 2013 KX250F is surely a contender for the strongest motor in its class, this translates to a more cost effective racing machine, a strong point for the struggling privateer in this day and age. A more competitive motor in stock form means massive saving’s for the rider – this is certainly something to keep in mind. The ergos are slim and bike well suited to a wide range of riders. Image: Alex Gobert.

Initially the front-end provided a harsh feel, but after a slight compression adjustment, that was soon gone. Small, square edge bumps were soaked up, while the larger hits were taken with ease. The SFF fork responds very well to any small changes, a feature which many customers will find quite convenient at the track.

With the front-end situated, the rear would have a tendency to skip around on corner entry while navigating through braking bumps. After a quick chat with the technicians from Kawasaki, we added more sag to the rear of the bike, which made a huge difference and gave a much more confident feel on the track.

The suspension package, combined with the all-new chassis, was designed to increase rigidity throughout the bike. This chassis paired with the strong motor, the KX250F provides a very race orientated feel – which is what Kawasaki intended, and they achieved this for sure. 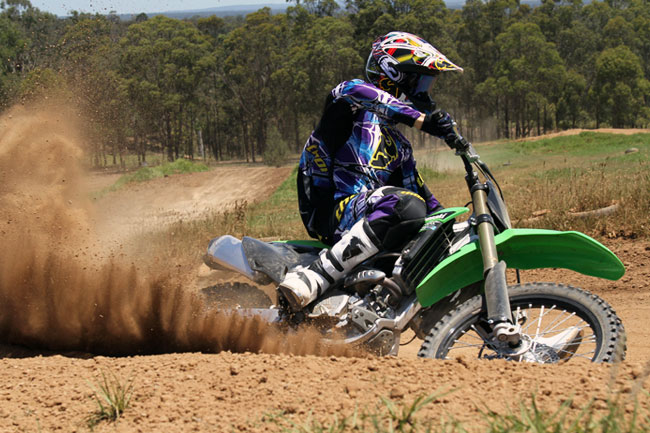 With added power and handling, comes the task of bringing it all to a stop. For 2013 a powerful front and rear petal disc brake system is fitted to help to reduce unsprung weight and clean the brake pads for more efficient braking performance.

The brakes, both front and rear, provided a consistent feel throughout the hot summers day, a very strong and controlled feel gave great rider feedback which allowed you to push the limits and extend your braking markers.

Overall, the 2013 Kawasaki KX250F is a visually pleasing, powerful, nimble and race ready bike straight out of the box. This MX2 contender is certainly aimed and built to please the racer, but also caters to a broad range of riders, thanks to it’s easily tuned nature, both chassis- and engine-wise.

The 2013 Kawasaki KX250F is now available through your local dealer at a recommended retail price of $10,999 throughout Australia. Click here for further detailed technical information on the model. 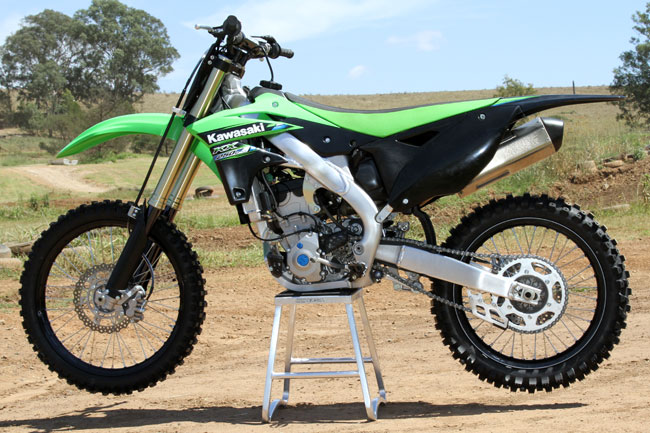